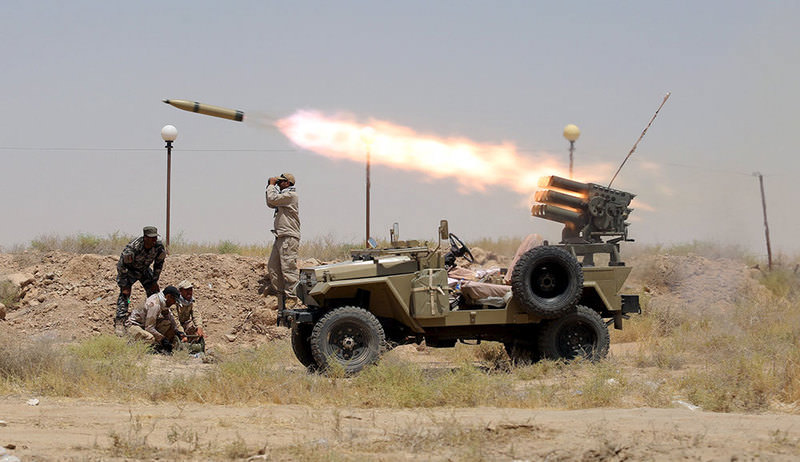 Iraqi army, Iranian-backed Shiite militias have launched an operation against ISIS to recapture Anbar while the U.S.-led coalition is also expected to join the operation. Yet Sunni residents fear aggression from militias

The Iraqi government began on Monday a long-awaited large-scale military operation to dislodge Islamic State of Iraq and al-Sham (ISIS) militants from Iraq's western Anbar province, a military spokesman announced. The spokesman for the Joint Operations Command, Brig. Gen. Yahya Rasool, said in a televised statement that the operation started at dawn on Monday and that government forces are backed by Shiite and Sunni pro-government fighters. Rasool didn't clarify whether the U.S.-led international coalition is taking part. This is not the first time the Iraqi government has announced an operation to retake Anbar, where several key towns, including the provincial capital Ramadi, remain under ISIS control. In May, authorities announced an operation to retake Ramadi, but there has not been any major progress on the ground since then. In a brief statement, Iraq's Prime Minister, Haider al-Abadi, vowed to "take revenge from ISIS criminals on the battlefield... and their cowardly crimes against unarmed civilians will only increase our determination to chase them and to expel them from the land of Iraq."

ISIS seized large parts of Anbar in early 2014 and captured Ramadi in May. Iraqi forces, which had been making steady progress against the extremists in recent months with the help of the air campaign, scored a major victory in recapturing Saddam Hussein's hometown of Tikrit last month.

During the past few weeks, the troops have been moving to cut the militants' supply routes and to surround and isolate Ramadi and Fallujah. Rasool did not provide any further details on the ongoing operations. By noon, the country's state TV reported government forces recapturing villages and areas around Fallujah. Hours after the announcement of the military operation, Iraq's Defense Ministry announced the arrival of four F-16 fighter jets from the U.S. to Balad air base north of Baghdad. They are part of the 36 F-16s purchased by the Iraqi government. The new fighter jets will boost Iraq's Air Force, which depends only on several Russian-made secondhand Sukhoi jets. Last week, a Sukhoi fighter jet accidentally dropped a bomb over a Baghdad neighborhood and killed at least 12 people.

Although the residents suffer from ISIS's presence, the involvement of Iranian-backed Shiite militias in the operation causes concerns. Several rights groups along with the U.S. expressed their discomfort with the Iranian-backed groups previously. Shiite militias have been known to carry out atrocities against Sunnis and sectarian hatred increased after the latest developments in the region in Syria and Yemen. For instance, when the operation for re-capturing Tikrit started, the U.S. and rights groups warned Baghdad to prevent human rights violations against Sunni residents, since some leaders of Shiite militias vowed revenge. Many Sunni residents of recaptured villages reported that Shiite militias looted shops and houses.