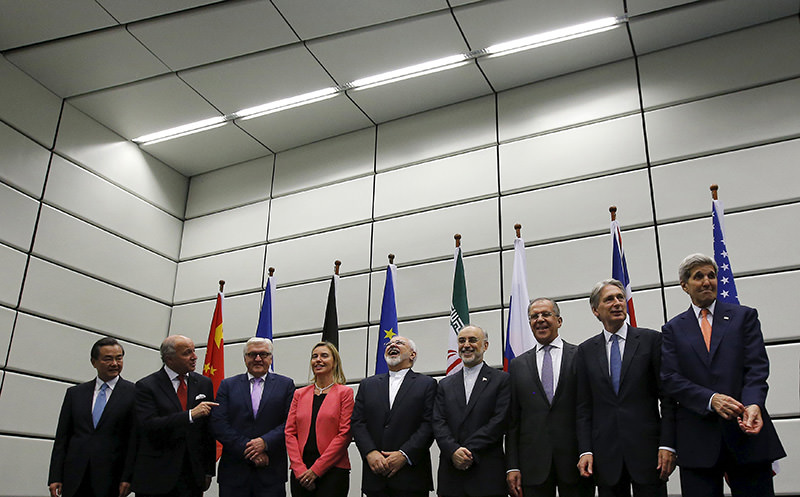 "It is a great honor for us to announce that we have reached an agreement on the Iranian nuclear issue," Mogherini told a news conference. "This is an historic day ... because we have created the conditions for building trust and opening a new chapter in our relationship."

Iranian foreign minister said the nuclear deal will help build confidence and called the accord a historical event.

"Today is a historical day ... the deal will help building confidence between Iran and the powers," Zarif said.

He said, the agreement shows Iran's peaceful approach and Iran under no circumstances is trying to make nuclear weapons. "This is the end of our negotiations, but not of our joint work; we shall follow up this serious commitment," the Foreign Minister said.

Iran has accepted a so-called "snapback" plan that will restore sanctions in 65 days if it violates a deal agreed with six world powers to curb the country's nuclear programme, diplomats told Reuters on Tuesday.

The diplomats said a U.N. arms embargo would remain in place for five years and U.N. missile sanctions would stay in place for eight years.

Iran's nuclear deal is "great news" for the Turkish economy as it is likely to boost bilateral trade, Turkish Finance Minister Mehmet Şimsek said on Tuesday.

"Iran nuclear deal is great news for the Turkish economy," he wrote in English on his official Twitter account. "It's likely to boost trade and investments between the two countries."

U.S. President Barack Obama heralded the nuclear deal as an opportunity worth seizing and warned Congress he would veto any legislation that prevented its successful implementation.

Obama, speaking at early hours of Tuesday at the White House, said every pathway for Iran to get a nuclear weapon was cut off under the agreement. The deal was built on verification, not trust, he said, and it would be "irresponsible" to reject.

The president said the deal did not resolve all of the differences between the historic foes and noted Washington would maintain sanctions on Tehran for human rights violations and other issues.

Despite those differences, Obama said the deal was a chance for change in the region.

"This deal offers an opportunity to move in a new direction," Obama said. "We should seize it."

Russian Foreign Minister Sergei Lavrov said on Tuesday that arms deliveries to Tehran will be possible if approved by the United Nations Security Council.

He also said Russia was counting on the United States carrying out a promise, which he said it had made in 2009, not to deploy missile defence systems in Europe once a nuclear deal was reached with Iran.

Saying arms deliveries would be possible to Iran under certain conditions even before an arms embargo expires, he said in comments broadcast from Vienna by Russian television: "In the next five years deliveries of arms to Iran will be possible, under the conditions of the relevant procedures, notification and verification by the U.N. Security Council."

Israeli Prime Minister Benjamin Netanyahu described the agreement reached on Tuesday by Iran and major world powers on Tehran's nuclear programme as a historic mistake and said he woud do what he could to block Iran's nuclear ambitions.

"World is a 'much more dangerous place," and that Israel is not bound by nuclear deal, he added.

"Iran is going to receive a sure path to nuclear weapons. Many of the restrictions that were supposed to prevent it from getting there will be lifted," Netanyahu said at the start of a meeting with Dutch Foreign Minister Bert Koenders in Jerusalem.

"Iran will get a jackpot, a cash bonanza of hundreds of billions of dollars, which will enable it to continue to pursue its aggression and terror in the region and in the world. This is a bad mistake of historic proportions."

Oil prices tumbled more than a dollar on Tuesday as Iran and six global powers reached a nuclear deal that could see an easing of sanctions against Tehran and a gradual increase in its oil exports just as Asian economies showed further signs of weakness.

"Sanctions have crippled Iran's oil production, halving oil exports and severely limiting new development projects. The prospect of them being lifted is creating great excitement ... as foreign trade and investment will allow Iran to make huge efficiencies and drive down the cost of production," said Sarosh Zaiwalla, a London-based sanctions lawyer.

Iran long has said its nuclear program is for peaceful purposes. The West fears it could be used to build an atomic bomb.