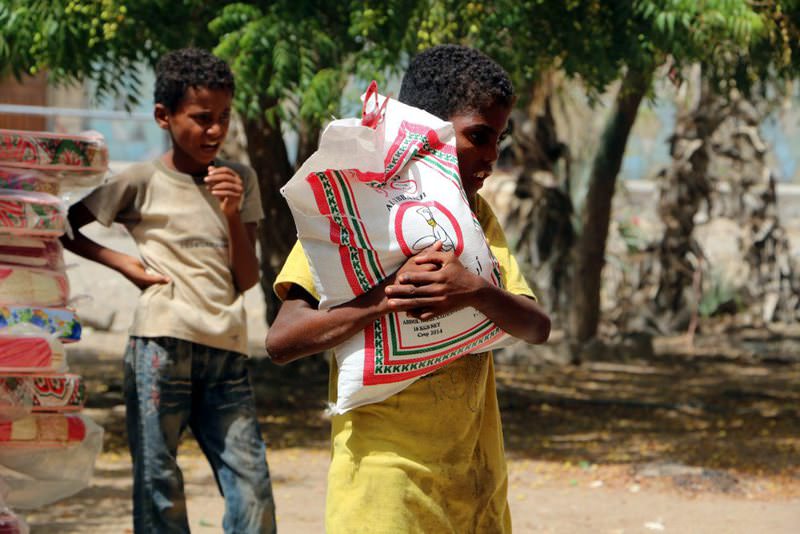 A Yemeni boy receives food aid from a local relief group providing aid to thousands affected by the ongoing fighting in the central city of Taiz, Yemen
by Daily Sabah with Wires Jul 15, 2015 12:00 am

As fighting continues between Shiite Houthi rebels and forces loyal to exiled President Hadi, the U.N. delivered urgent food and medical aid to the Yemeni province of Aden

The United Nations' convoys of food and medical supplies have reached the southern Yemeni province of Aden, but fighting around Aden's port is still preventing ships from docking, U.N. officials said on Tuesday.

A 40-truck convoy carrying enough food for 117,000 people for a month, reached the province after being held at the Rabat checkpoint outside Aden since July 9, said Abeer Etefa, a spokeswoman for the U.N. World Food Program in Cairo. The World Health Organization also brought 46.4 tons of aid into the city of Aden on Saturday, including trauma kits, medicine to treat malaria and diarrheal diseases, and sanitation supplies for more than 84,000 people. Johannes Van Der Klaauw, the U.N. humanitarian coordinator for Yemen, said it took "days and days to organize the safe passage" of the medical supplies. Hopes of shipping 500,000 liters of fuel to Aden - needed for aid distribution and hospital generators - were still blocked by the fighting."The area around the port for the last 48 hours has been a war zone," Etefa said. More than 3,000 people have been killed and 1.2 million displaced in a conflict between Iran-backed Shiite Houthi rebels and forces loyal to President Abd-Rabbu Mansour Hadi, who has fled to Riyadh.

The U.N. says 21 million people need help, about 80 percent of the population of the country. Ar

ound 6.1 million are in a food emergency, one step below famine on a five-step scale. Another 6.9 million are in a "critical" situation. The food convoy was the U.N.'s first major resupply for the province since March. A week-long U.N.-brokered cease-fire was meant to begin on Saturday to allow the delivery of aid. It failed to take hold after Saudi Arabia refused to recognize the truce and continued air strikes. "Since the pause didn't take place, we still have a big problem that Aden is not reachable by sea," Van Der Klaauw told a news briefing. Etefa said the security situation on the ground had not changed significantly and shops were running out of basic commodities. As ships are diverted to the northern port of Hodeida, goods have to be trucked to Aden.

The United Nations also said Tuesday that at least 142 civilians have been killed in Yemen over the past 10 days, bringing the civilian death toll over more than three months of violence to 1,670. Rupert Colville, a spokesman for the U.N. human rights office said a total of 3,829 civilians have been injured. The agency added that nearly 1.27 million Yemenis are now displaced within their own country, while more than 51,000 people have fled Yemen for Djibouti, Somalia, Oman, Saudi Arabia and Sudan.

Meanwhile, Yemeni forces recaptured Aden's international airport and some city districts from Houthi rebels on Tuesday, in a sudden advance after months of stalemate, the exiled government said. The advance has been considered as a major blow for Houthi rebels, basically trapping them on the small peninsula that is part of Aden. Residents elsewhere in this city on the Arabian Sea took to the streets later on Tuesday to celebrate the advances by the anti-rebel forces.

Tuesday's operation was assisted by "preparatory airstrikes" by the Saudi-led coalition that targeted the Houthi positions over the past few days, according to a statement by Ali al-Ahmadi, the spokesman for the Aden Resistance Leadership Council, which leads the city's anti-rebel forces.

Independent security officials confirmed the advancement but rebel officials refused to comment on the developments. Both the independent and the rebel officials spoke on condition of anonymity because they were not authorized to talk to the media.Fractious Yemen has remained in turmoil since last September, when Houthi rebels overran Sanaa from which they have sought to extend their influence to other parts of the country. On March 25, Saudi Arabia and its Arab allies began an extensive air campaign targeting Houthi positions across the country.
Last Update: Jul 15, 2015 10:33 pm
RELATED TOPICS