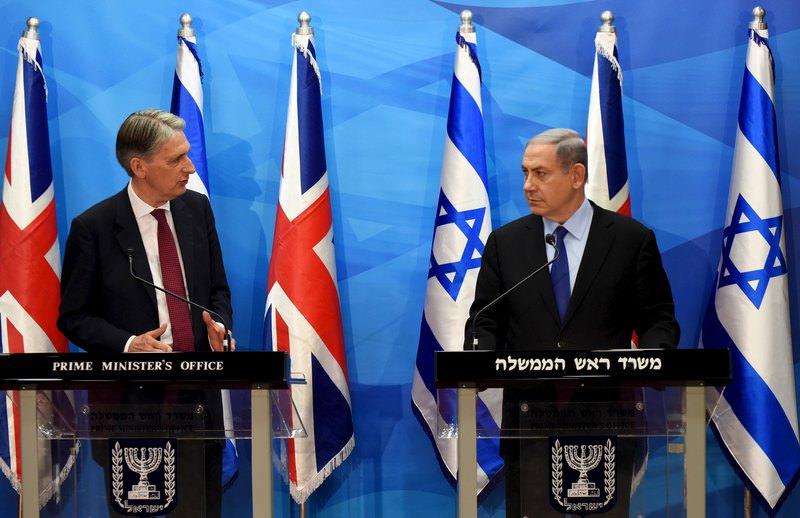 by Associated Press Jul 17, 2015 12:00 am
Israel's prime minister and the British foreign secretary publicly sparred on Thursday over the nuclear deal with Iran, veering off prepared comments to exchange sharply different positions toward the agreement.

The awkward encounter reflected two world views: Western powers hope the deal can eventually moderate Iran and bring it back into the international community, while Israel believes Iran will use any newfound legitimacy as cover to strengthen militant groups and further destabilize the region.

Prime Minister Benjamin Netanyahu battled unsuccessfully to scuttle what he called "a bad deal" emerging in the talks, insisting that any sanctions relief would provide Iran with a "cash bonanza" that will make it easier for the Islamic Republic to continue to support Israel's enemies, including the Lebanese Hezbollah Shiite militant group and the Palestinian group Hamas, and meddle in proxy conflicts in the Middle East.

Since the deal was announced, Netanyahu has condemned it as a "stunning historic mistake," saying Israel was not bound by the agreement and suggesting that military action remains an option. Opposition legislators have rallied around Netanyahu against the deal, and Netanyahu's chief political rival, Isaac Herzog announced he would travel to the U.S. to lobby for a compensation package to insure Israel's military advantage in the region.

In his appearance with Foreign Secretary Philip Hammond on Thursday, Netanyahu expressed his concern that the deal does not seek to link sanctions relief to Iran's conduct.

"We would have wanted to see a deal that says the following: 'Iran, you will get the easing on the restrictions on your nuclear program, and you will get sanctions relief if you change your behavior first," Netanyahu told Hammond, saying he found it "perplexing" that the deal does not address repeated calls by Iranian leaders for Israel's destruction.

He said that by easing sanctions and giving Iran hundreds of billions of dollars in relief in the coming years, Iran would foment "more terrorism" through its proxies in the Middle East and beyond. Hezbollah and Hamas possess vast arsenals of rockets and missiles funded or produced by Iran.

Arab countries similarly have been skeptical of the deal, and also worry that it gives Iran the means and an implicit green light to expand its influence in the region.

But the Western countries that negotiated the deal hope the accord may be the first step in steering Iran toward a more conciliatory path that may eventually end decades of animosity.

"We are not naive about this," Hammond said. "We understand that our many disputes with Iran about its regional conduct will remain and will have to be dealt with in the months and years to come."

The accord requires Iran to dismantle key elements of its nuclear program, lower its uranium enrichment levels, and give up thousands of centrifuges. International inspectors will have access to Iran's declared nuclear facilities, but must request visits to Iran's military sites, access that isn't guaranteed.

If Iran abides by the parameters, it will receive billions of dollars in relief from crippling international sanctions that have badly damaged the country's economy and in five years, have an arms embargo lifted. The deal could also open new economic horizons, with French Foreign Minister Laurent Fabius saying there were interesting commercial opportunities to be had.

At their media briefing, Netanyahu and Hammond each read from prepared notes before engaging in an awkward back-and-forth that extended what is usually a standard, brief public appearance with visiting officials into a spirited debate.

Hammond pushed back on Netanyahu's criticisms, stressing that the deal was only intended to place limits on Iran's nuclear program and not address its conduct in the region.

Speaking later to Israeli Channel 2 TV, he said that while he didn't expect Iran to change overnight, over time and with growing engagement, it could become more moderate.

The exchange came a day after Hammond told the British Parliament that Israel wants a "permanent state of standoff" with Iran and suggested it wouldn't have welcomed any kind of nuclear deal.

"Israelis know better than anyone else the cost of permanent conflict with Iran and it is wrong to suggest that Israel wants such an outcome," he said. "But Israelis also know exactly what would happen if we ever let our guard down."
Last Update: Jul 17, 2015 1:48 am
RELATED TOPICS