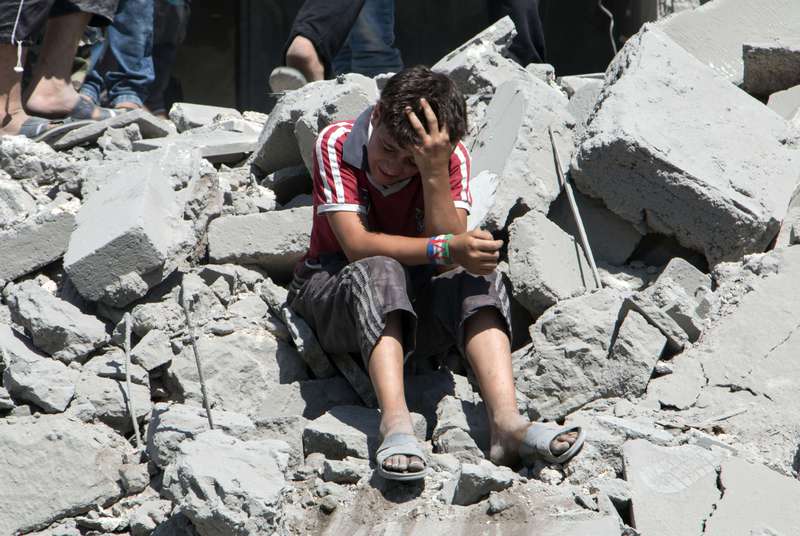 by Daily Sabah with Wires Jul 21, 2015 12:00 am
At least 18 civilians were killed on Tuesday when a ground-to-ground missile struck a rebel-held neighborhood in the northern Syrian city of Aleppo, a monitoring group said.

Another 50 were wounded or missing in the city's central neighborhood of Maghawir, the Syrian Observatory for Human Rights said, blaming the attack on forces loyal to the Syrian dictator Bashar al-Assad.

Aleppo, Syria's largest city before it was engulfed by fighting in 2012, is divided between the Assad regime-held western districts and the rebel-held east.

In the Qalamoun region west of the capital Damascus, government forces backed by the Lebanese terrorist group Hezbollah seized areas outside Zabadani, the last rebel-controlled town in the area.

The Hezbollah said it had taken control of the plain outside the city and a main road in cooperation with the Syrian army.

"The city of Zabadani is under the full siege of the Syrian army and our resistance fighters," the terrorist group said.

Hezbollah is trying to eliminate rebel forces from all areas between the Lebanese border and Damascus.

Zabadani lies 12 kilometers from the border crossing on the Damascus-Beirut highway and about 25 kilometers north-west of the Syrian capital.

The Syrian conflict, which started when the Assad regime forces brutally repressed peaceful protests in 2011, has descended into a multi-sided civil war.

Forces loyal to Syrian dictator Bashar al-Assad are facing off against an array of rebel and terrorist groups and both sides are under attack from the self-proclaimed Islamic State of Iraq and al-Sham (ISIS) group which now controls most of eastern Syrian territory.

Syria's Kurds have carved out a de facto autonomous region named 'Rojava' in the north of the country and are attacking ISIS with intensive U.S.-led air support.
Last Update: Jul 21, 2015 8:09 pm
RELATED TOPICS