Syria's embattled Assad claims to be open to dialogue 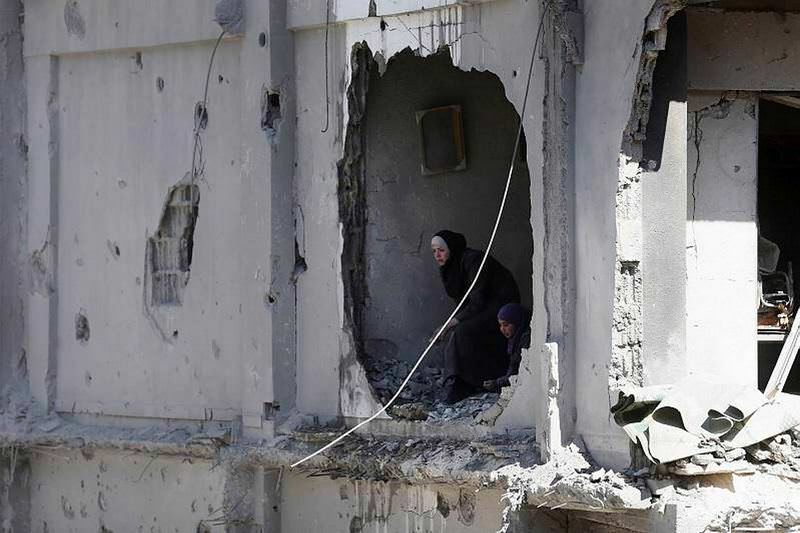 As Assad claims to be open to a political solution, the air force continues to pound civilian areas.
by Daily Sabah with Wires Jul 27, 2015 12:00 am

After claiming that his regime is open to political dialogue to end the war, in a televised speech, Syria's Bashar Assad insisted on remaining in his post and vowed to defeat opposition groups

In his first public address in a year, embattled Syrian President Bashar Assad vowed Sunday to win his country's long-running civil war while acknowledging his troops had given up control of some territory. Assad's televised speech Sunday morning, given to local dignitaries in the Syrian capital, Damascus, was his first public speech since he was sworn in for a third, seven-year in July last year. Assad has given interviews to several Arab and international media outlets in the meantime. "We are not collapsing. We are steadfast and will achieve victory," said Assad, who was interrupted several times by applause. "Defeat does not exist in the dictionary of the Syrian Arab army."

In his speech, Assad tried to justify why the Syrian army has given up some areas of the country, including the northwestern city of Idlib. Assad-allied forces, including fighters from the Lebanese militant group Hezbollah and Iranian advisers, control a little less than half of Syria's 185,000 square kilometers (71,400 square miles). "It was necessary to specify critical areas for our armed forces to hang on to," Assad said. "Concern for our soldiers forces us to let go of some areas." He added: "Every inch of Syria is precious."

Assad's speech comes after his government announced a general amnesty for army deserters and draft dodgers Saturday. There are thousands of army deserters in and outside Syria, many of whom have gone on to fight with rebels seeking to topple Assad. The overstretched Syrian army suffers manpower shortages as young men flee the country to avoid compulsory military conscription. Assad claimed that his government did not want war "but when it was imposed on us, the Syrian Arab army repelled the terrorists everywhere." Assad refers to any rebel group fighting against his rule as 'terrorists'.

The government's military setbacks have triggered renewed pledges of support from Assad's main regional allies, the Shiite government of Iran and the Lebanese group Hezbollah, which is fighting alongside the Syrian army. Assad said Iran's role was limited to the provision of military experts, while publicly crediting Hezbollah for its "important" and "effective" role for the first time. Hezbollah is playing a central role in an ongoing offensive to drive insurgents from the Lebanese-Syrian border.

Despite claiming that he supports any political dialogue to end the bloody civil war, the regime continues to pound rebel-held areas, killing mostly civilians. Last week, more than civilians died of aerial strikes in several cities.

In March 2011, Syrians were emboldened enough to raise their voices against the dictatorship. However, the regime's response was not as peaceful as the protests, and the country was subsequently dragged into a deadly civil war after opposition groups took up arms against the government. The Syrian civil war has now entered its fifth year and has caused the death of more than 200,000 people and at least 60,000 are missing. The war has also displaced nearly 10 million people. While the international and regional powers continue endless discussions, the regime does not just use conventional weapons, but also chemical weapons. About 13.6 million people, equivalent to the population of London, have been displaced by conflicts in Syria and Iraq, many without food or shelter, the U.N. refugee agency revealed. The 13.6 million include 7.2 million displaced within Syria – an increase from a long-held U.N. estimate of 6.5 million, as well as 3.3 million Syrian refugees abroad, 1.9 million displaced in Iraq and 190,000 who have left to seek safety. The vast majority of Syrian refugees have gone to Lebanon, Jordan, Iraq and Turkey. Western countries have been frequently criticized by aid agencies and the U.N. for not opening their borders to the Syrian refugees as the most developed countries have received the least number of refugees.
Last Update: Jul 27, 2015 2:19 am
RELATED TOPICS