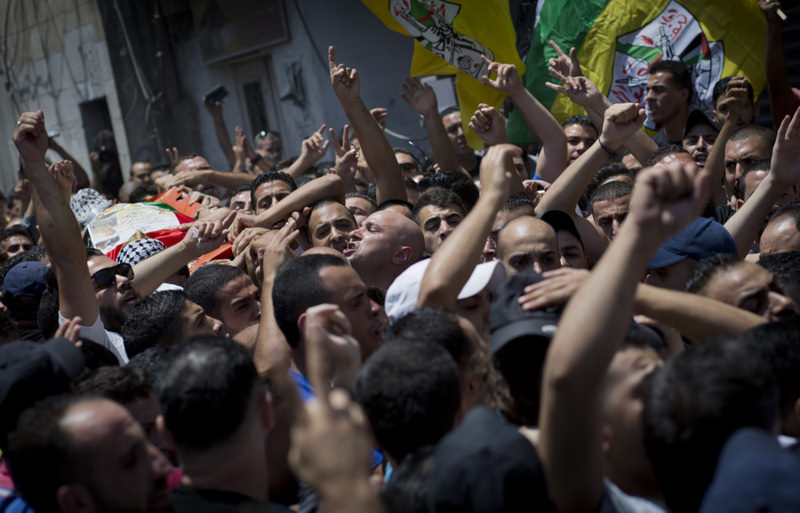 Mourners chant slogans while carrying the body of Palestinian Mohammed Lafi Abu Latifeh, 20, who was killed during an Israeli arrest raid, during his funeral procession.
by Cihangir Yıldırım Jul 27, 2015 12:00 am

Israeli forces have killed three Palestinians in the West Bank over the past week, with dozens wounded and detained. On Monday, Al-Aqsa Mosque was also raided by Israeli police as tensions simmer

A Palestinian youth called Muhammed Abu Latifa, 18, was shot by Israeli forces during an arrest raid at the Qalandiya refugee camp in the West Bank yesterday. According to Israeli officials, Abu Latifa attempted to flee to the building's roof. Allegedly, he was shot after repeated warnings to stop. It was the third such incident in seven days. Last Thursday, Israeli military forces shot dead Faleh Hamed Zamel Abu Maria, 53, during an arrest mission in the West Bank village of Beit Ummar. On Wednesday, Mohammed Ahmed Alauna 21, was shot and killed by Israel Defense Forces (IDF) soldiers in the West Bank village of Burkin, located west of Jenin.

On Sunday, Israeli police stormed the Al-Aqsa Mosque during the Jewish holiday Tisha B'Av. Clashes erupted between Palestinian Muslim worshippers and Israelis near the mosque compound in Jerusalem after more than 30 Israelis tried to enter the mosque to mark the Jewish holiday. Eyewitnesses said that police fired concussion grenades heard inside the compound. In response, Palestinians threw stones and fireworks at Israeli police. Also, in the clashes one Israeli officer was wounded, and at least six Palestinians were detained. According to local sources, 25 Palestinians were wounded, including seven women.

The Al-Aqsa Mosque (the third holiest site in Islam) has been attacked several times by Israeli citizens and Israeli police previously. The Al-Aqsa Mosque was the first "Qibla" (the direction that Muslims turn toward when praying) for Muslims. Last June, 55 Israeli Jews stormed the holy site. Also last March, 132 Jews attacked the Mosque with stones. Palestinians women and children were also wounded in the attacks. Israeli former Prime Minister Ariel Sharon's visit to the Al-Aqsa Mosque was seen as provocative and led to the second intifada in September 2000, sparking the already tense conflict between Israel and the Palestinians. Last November, Israel ordered the full closure of the Al-Aqsa Mosque compound for the first time in 14 years. Muslims in East Jerusalem are normally allowed to enter the mosque to pray without restriction. In recent years, especially during clashes, all men under 50 and women under 45 have been banned from entering the Al-Aqsa Mosque.

Over the rising tensions, especially in the West Bank, the IDF began a mass drill to test its various corps on Monday. The IDF will also test its cyber defense skills during the drill, simulating a scenario in which both the army and the country at large are to subject to a major cyber-attack. According to the IDF, the military drill was planned in advance as part of an expansive 2015 training plan aimed at improving soldiers' preparedness in the face of emergency scenarios. Officials said that the drill will focus also on rocket fire from the Gaza Strip. In previous years, IDF officers have carried out military maneuvers in the summer months before the attacks. The last attack by Israel on Gaza, "Protective Edge," was last summer.

Israel still continues its blockade on Gaza, stopping aid flotillas sailing from other countries. The latest, a Freedom Flotilla III vessel, was stopped by Israel last June and prevented from breaking the blockade imposed on Gaza. The first Gaza Freedom Flotilla expedition in May 2010 ended in tragedy after Israeli commandos killed 10 Turkish nationals, including 19-year-old Furkan Doğan, an American of Turkish origin, in a bloody raid of the Mavi Marmara. The second Gaza Freedom Flotilla took place in 2012. It was forced to turn back.

Also, Gazan children have long suffered from Israeli attacks on the Gaza Strip. Ahed Atef Bakr, 10, Zakaria Ahed Bakr, 11, Mohamed Ramez Bakr, 10, and Ismael Mohamed Bakr, 9, became symbols of Israeli aggression against children. The four children were hit and killed by an Israeli shell while playing on a Gazan beach last summer. The attack was witnessed by scores of foreign journalists who reported the tragic death. According to a UNICEF report, the conflict in Gaza last year saw 564 children killed along with 2,956 others. According to the report by the global children's charity, Save the Children, around 100,000 people in Gaza are still homeless. The report added that 551 children were killed during the Israeli attack, and an estimated 1,500 lost their parents. According to the charity, the majority of children, up to 75 percent, show signs of severe emotional distress, including high levels of bedwetting and nightmares. Meanwhile, 89 percent of parents reported that their children suffer consistent feelings of fear and more than 70 percent of children said they worry about another war. Also the PLO reported that 1,226 Palestinian's under the age of 15 were taken into custody by Israeli forces.

Also, an independent U.N. commission of inquiry released its report in last June on Israel's 2014 Operation Protective Edge finding evidence that Israel committed war crimes during the war in the Gaza Strip in 2014. The report could serve as a road map for the preliminary examination already underway by the International Criminal Court's prosecutor.
Last Update: Jul 27, 2015 11:21 pm
RELATED TOPICS