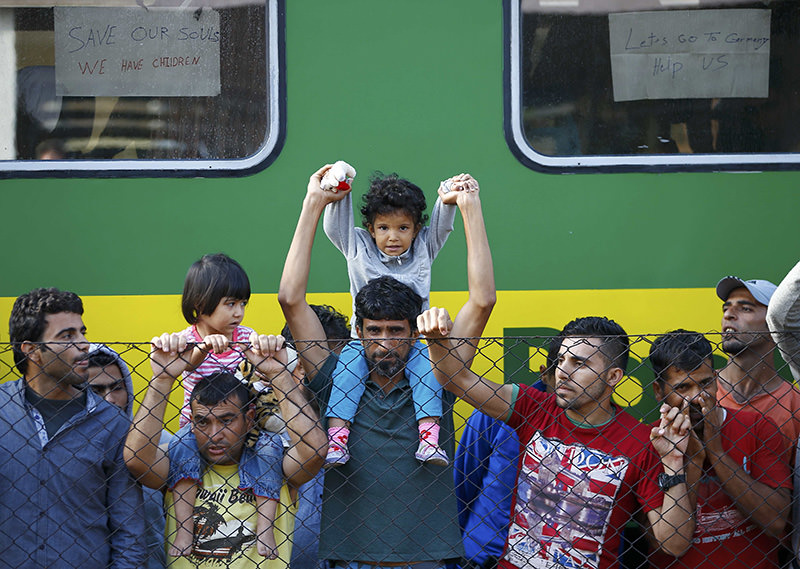 Refugees stand alongside a train at Bicske railway station, Hungary, September 4, 2015 (Reuters Photo)
by Compiled from Wire Services Sep 05, 2015 12:00 am
Opposition Labour party leader Isaac Herzog called Saturday for Israel to take in Syrian refugees, recalling the plight of Jews who sought refuge from past conflicts.

"Our people has experienced first-hand the silence of the world and cannot be indifferent in the face of the murder and massacre raging in Syria," Herzog posted on his Facebook page.

Speaking at a panel discussion in Tel Aviv, he called on the government "to act toward receiving refugees from the war in Syria, in addition to the humanitarian efforts it is already making."

"Jews cannot be indifferent while hundreds of thousands of refugees are seeking a safe haven," he was quoted by Haaretz newspaper as saying.

There is already hostility in Israel toward asylum-seekers from Africa and a concerted government effort to repatriate them.

Official figures show there are 45,000 illegal immigrants in the Jewish state, almost all from Eritrea and Sudan.

Most of those who are not in detention centres live in poor areas on the south side of Tel Aviv, where there have been several protests against them.

Meanwhile, Palestinian president Mahmud Abbas called on the United Nations Saturday to press Israel to allow Palestinians from refugee camps in Syria to take shelter in the Palestinian territories, whose external borders are controlled by the Jewish state.

"President Abbas has asked the Palestinian representative to the UN to implement as quickly as possible, in coordination with the UN secretary general, measures for the return of Palestinian refugees from Syria to the Palestinian territories," his office said.

The UN says there are more than 525,000 Palestinian refugees at its camps in Syria, many of whom have been displaced by the civil war there.

After a tense standoff in Hungary, scores of asylum seekers began making their way into Germany and Austria Saturday.