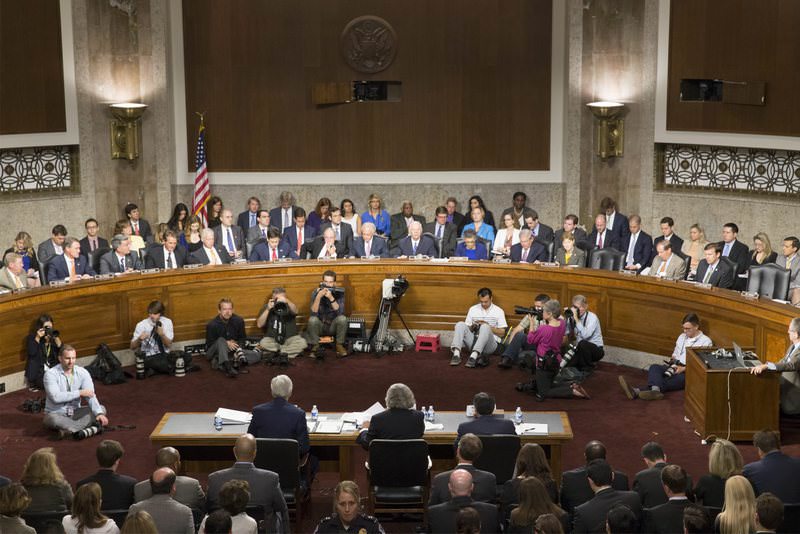 by Sep 10, 2015 12:00 am
U.S. Senate Democrats voted to uphold the hard-fought nuclear accord with Iran on Thursday, overcoming ferocious Republican opposition and delivering President Barack Obama a legacy-making victory on his top foreign policy priority.

A disapproval resolution for the agreement fell two votes short of the 60 needed to move forward in ther 100-memberchamberd as Democratic and independent senators banded together against it. Although House Republicans continued to pursue eleventh-hour strategies to derail the international accord, the outcome in the Senate guaranteed that the disapproval legislation would not reach Obama's desk.

As a result the nuclear deal will move forward unchecked by Congress, an improbable win by Obama in the face of unanimous opposition from Republicans who control Congress, Republ9ican candidates seeking to replace him in the Oval Office and the state of Israel and its allied lobbyists in the U.S.

Beginning next week, Obama will be free to start scaling back U.S. sanctions to implement the agreement negotiated by Iran, the U.S. and five other world powers. The accord aims to constrain Iran's nuclear ambitions in exchange for hundreds of billions of dollars in relief from international sanctions.

"We have one goal in mind, shared by many nations around the world: to stop Iran from developing a nuclear weapon," said Sen. Dick Durbin of Illinois, the No. 2 Senate Democrat. "I believe this agreement comes as close to achieving that as we can hope for at this moment."

Frustrated Republicans railed against Democrats for using a procedural vote to block final passage of the disapproval resolution, and issued grim warnings about a deal they contend could serve only to enrich Tehran and leave it closer to building a bomb when constraints begin to ease in 10 or 15 years.

"To my Democratic friends: You own this. You own every 'I' and every 'T' and every bullet, and you own everything that is to follow," said Sen. Lindsey Graham, a Republican. "And it's going to be holy hell."

In the House, Republicans had not given up on blocking the deal against all odds. After backtracking on plans to vote on the disapproval resolution when it began to look short of support in the Senate, House Republicans lined up votes on several related measures.

Late Thursday they expected to pass a measure specifying that Obama had not properly submitted all documents related to the accord for Congress' review, and therefore a 60-day review clock had not really started.

That would be followed Friday by votes on a bill to approve the accord which is doomed to fail, but Republicans want to force Democrats to go on record in favor of the agreement and on a measure preventing Obama from lifting congressionally mandated sanctions on Iran.

"This debate is far from over, and frankly, it's just beginning," said House Speaker John Boehner, a Republican. "This is a bad deal with decades-long consequences for the security of the American people and our allies. And we'll use every tool at our disposal to stop, slow, and delay this agreement."

Some House Republicans, buoyed by a favorable ruling this week in a lawsuit they filed over Obama's health care law, have begun suggesting a lawsuit to stop the accord. Boehner called that "an option that is very possible."

Yet the House Republican maneuvers seemed to have little chance of bearing results, and White House officials sarcastically branded them the "Tortilla Coast Gambit," a reference to a Capitol Hill restaurant where tea party lawmakers plan their moves. Even before the Senate voted, White House Press Secretary Josh Earnest was boasting of the administration's success.

"Look, if we were sitting here just a month ago, back in mid-August, talking about how things would be resolved in Congress ... and I told you that neither house of Congress would pass a resolution of disapproval for this agreement, you'd be shocked," Earnest said. "That's an indication of the kind of progress that we've made."
Last Update: Sep 10, 2015 11:43 pm
RELATED TOPICS