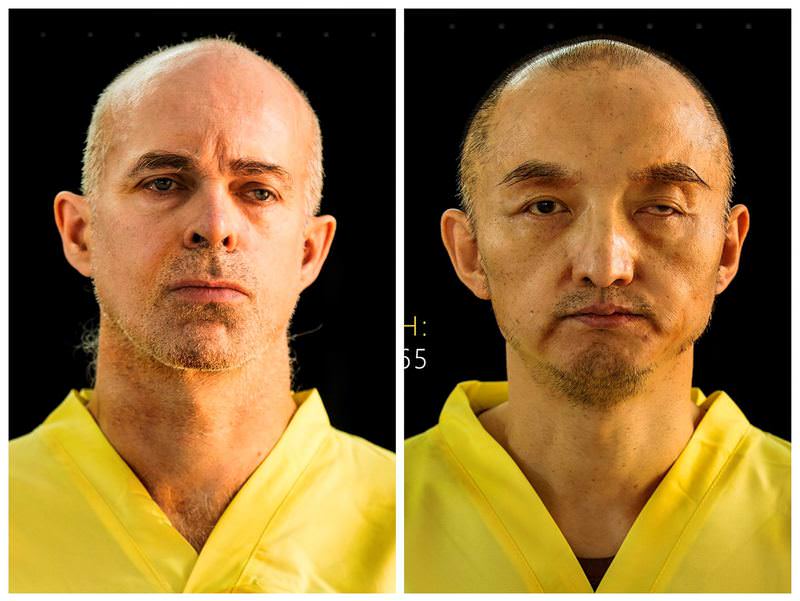 This combination of undated photos taken from the Islamic State of Iraq and al-Sham's (ISIS) online magazine Dabiq purports to show Ole Johan Grimsgaard-Ofstad, 48, from Oslo, Norway (L) and Fan Jinghui, 50, from Beijing, China.
by Daily Sabah Sep 11, 2015 12:00 am

ISIS, which has shaken the world several times with the brutal killing of foreign hostages, released photos of two more captives. Under each hostage's picture it read they would be saved through paying ransom

ISIS posted pictures of the two men wearing yellow prison outfits in the latest issue of its English-language online magazine Dabiq, released on Wednesday. It identifies a Norwegian man as Ole Johan Grimsgaard-Ofstad, 48, from Oslo and a Chinese man as Fan Jinghui, 50, a freelance consultant from Beijing. There is no information about when or where the two prisoners were captured by ISIS militants. The two men claim they were "abandoned" by their states after being captured. 'Norwegian prisoner for sale' and 'Chinese prisoner were sale' were written under the photos.

Norwegian Prime Minister Erna Solberg confirmed that a Norwegian man in his 40s was being held hostage in Syria, and "everything indicates" that ISIS is responsible. "This is a matter that the government is taking very seriously. We neither can nor will we give in to pressure from terrorists and criminals. Norway does not pay ransom. This is a principle we cannot depart from in the face of cynical terrorists. Payment of ransom would increase the risk that other Norwegian nationals will be taken hostage," Solberg said.

Under each hostage's picture it read: "To whom it may concern of the Crusaders, pagans, and their allies, as well as what are referred to as human rights' organizations, this prisoner was abandoned by his government, which did not do its utmost to purchase his freedom." Another caption under the pictures reads: "Whoever would like to pay the ransom for his release and transfer can contact the following telegram number," adding that this is a "limited time offer."

Laws in the U.S. and U.K. prohibit payment of ransoms. ISIS has also claimed that its militants held 20 hostages in August. Nearly all of the European hostages' countries paid the ransoms.

ISIS has previously beheaded citizens of Australia, France, Japan, the U.K. and the U.S. among others. Aside from aid workers and civilians, ISIS has also executed dozens of Syrian and Kurdish soldiers. In August, ISIS militants killed 10 men by forcing them to kneel on top of explosives buried just underneath the soil, blowing them up simultaneously. In February, the group released a video showing a Jordanian pilot being burned alive. ISIS has filmed some executions with high production values and detail and posted on its pages. ISIS executioner Mohammed Emwazi, known as "Jihadi John," promised in an August video to return to the U.K. and commit acts of terror such as "cutting heads off." Jihadi John previously beheaded U.S. hostages James Foley, Peter Kassing and Steven Sotloff, U.K. hostages David Haines and Alan Henning and Japanese hostages Haruna Yakawa and Kenji Goto. A U.N. Assistance Mission for Iraq (UNAMI) report said that members of ethnic and religious communities in areas under ISIS control continue to be persecuted, with around 3,500 Yazidis remaining in ISIS captivity, suffering both physical and sexual violence.
RELATED TOPICS