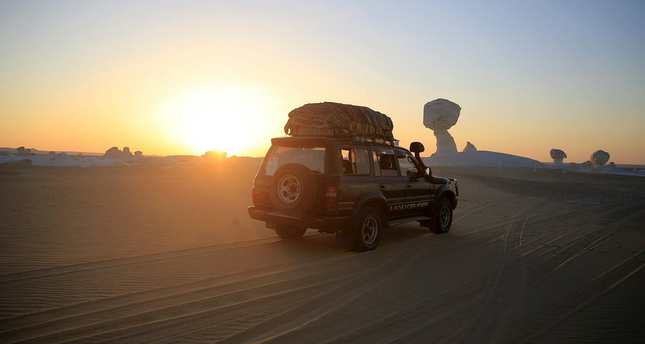 by Associated Press Sep 14, 2015 12:00 am
At least 12 people were killed and 10 injured in Egypt's southwestern desert Sunday when security forces mistakenly fired on a group of Mexican tourists, Egyptian officials said. The Mexican Foreign Ministry confirmed the incident and said at least two of the dead were Mexican nationals. It said in a statement that the victims were still being identified, and Foreign Ministry personnel were working with the families of the victims. Mexican President Enrique Pena Nieto posted a statement on his Twitter feed Monday morning saying his government "condemns these acts against our citizens" and demanding a thorough investigation.

A joint military-police force was pursuing "terrorist elements" in the area and fired on four cars that turned out to be carrying tourists, according to Egypt's Interior Ministry. The ministry said the victims were Egyptian and Mexican. Egyptian officials claim the safari convoy had wandered into a restricted area of the western desert. The tour company involved "did not have permits and did not inform authorities," Rasha Azazi, a spokesperson for the Egyptian Ministry of Tourism, told The Associated Press, adding that any trips to that area are required to be cleared by officials. "They were not supposed to be there," she said, but could not provide further information on the circumstances of the shooting.

Mexican Foreign Minister Claudia Ruiz Massieu was in contact with Egypt's ambassador to Mexico and also demanded an investigation and explanation of what happened, the Mexican statement said. She also demanded the support of Egyptian authorities for Mexican nationals being transported to Cairo. Jorge Alvarez Fuentes, Mexico's ambassador to Egypt, and consular representatives visited the wounded at the Dar el-Fouad Hospital in suburban Cairo, and Fuentes had interviewed five survivors, the Foreign Ministry statement said. It did not provide details on the survivors' accounts of the incident.

Egypt's western desert is popular among safari enthusiasts, but has not been known as a hotbed of militant or insurgent activity. Police and military there have primarily been concerned with combatting smuggling along Egypt's large and porous border with Libya.

Northern Sinai has over the past two years witnessed a series of complex and successful attacks targeting Egyptian security forces, many of which have been claimed by a local affiliate of ISIS. The group is targeting police forces and soldiers on the Sinai Peninsula, a strategically important area that borders Israel, Gaza and the Suez Canal, the fastest shipping route between Europe and Asia. Egyptian security forces face an armed insurgency that has killed hundreds of soldiers and policemen.