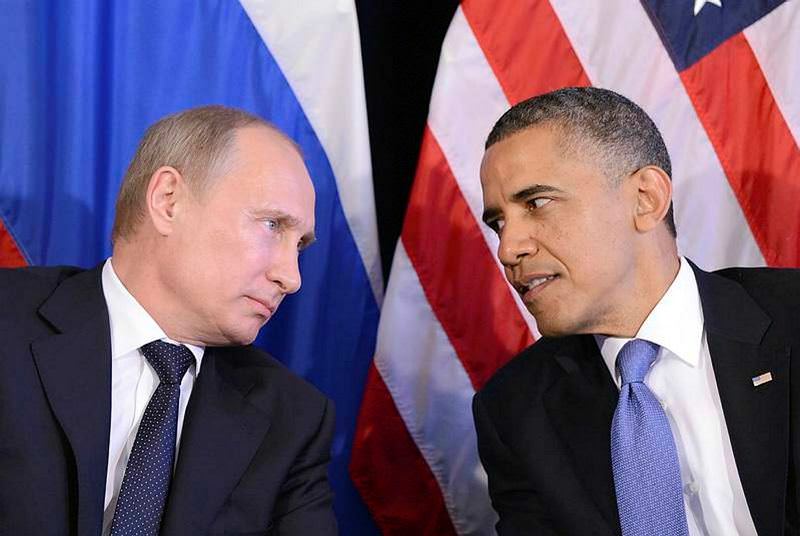 Russian President Vladimir Putin (L) and U.S. President Barack Obama (R) are the main actors whose disputes directly affect the war in Syria.
by Daily Sabah with Wires Sep 19, 2015 12:00 am

Since the Kremlin declared it has been increasing military aid to the Syrian regime, the U.S. said the White House may hold talks with Russia, and there might be a new attempt to unify rebels against ISIS

The United States opened the door on Thursday to possible tactical discussions with Russia about the war in Syria, as Moscow's deepening military presence raised the prospect of some limited coordination between the former Cold War foes. The White House said it "remains open to tactical, practical discussions" with Moscow. The Pentagon acknowledged that such talks might be necessary to avoid "miscalculation," although it was unclear when or under what conditions they might take place.

The United States fiercely opposes Russia's support for Syrian President Bashar Assad, and the Pentagon last year cut off high-level discussions with Moscow after its annexation of Crimea and intervention in Ukraine.

But Russia's buildup at Syria's Latakia air base raises the possibility of air combat missions in Syrian airspace. Russian heavy equipment, including tanks, helicopters and naval infantry forces, have been moved to Latakia, U.S. officials say. One U.S. official told Reuters on Thursday that the United States believed as many as 500 Russian troops were now at the airfield, an increase from a previous estimate of about 200. "We want to avoid miscalculation. We want to avoid problems," Pentagon spokesman Peter Cook told a news briefing, noting however that Russia was not carrying out such operations now and had not yet explained its intentions.

The United States has long warned Syria not to interfere in U.S.-led coalition air operations, which target Islamic State of Iraq and al-Sham (ISIS) militants. "We would welcome constructive contributions from the Russians to the anti-ISIS coalition," Earnest said. "So that's why we'll remain open to tactical, practical discussions with the Russians in order to further the goals of the counter-ISIS coalition and to ensure the safe conduct of coalition operations." U.S. Secretary of State John Kerry said on Wednesday that Russia had sought military-to-military talks on Syria.

Russia recently started emphasizing the ISIS threat in Syria and seems to be creating the ground for conducting operations. About 2,400 Russian nationals are fighting with ISIS militants, Russia's First Deputy Director of Federal Security Sergei Smirnov was reported as saying on Friday. The RIA news agency also quoted Smirnov as saying that in total there are about 3,000 Central Asian nationals in ISIS ranks. Speaking to journalists, Smirnov said that the problem of refugees fleeing the Middle East to Europe is only likely to increase, posing potentially a "great threat" for Russia. "The assertion that Moscow's support negatively impacts the situation in Syria, and the flow of refugees in particular, is not true. This is due to the expansion of ISIS in the region," he said. Hinting at the United States, Smirnov said that there are "some countries that try to evade" international cooperation on fighting terrorism. "There is cooperation but not at the right level, especially with the United States," he said.

Russia would consider a request from Syria to send troops if Damascus asks for it, the Kremlin's spokesman said on Friday. "If there is a request [from Syria], then in the framework of a bilateral dialogue it would be, naturally, discussed and considered," presidential spokesman Dmitry Peskov told journalists on a conference call. "For now, it's difficult to speak hypothetically."

Russia already has a large military presence in Syria and is sending more military equipment. Having already delivered anti-aircraft systems and tanks to Syria, the Russian government is now in discussions for the delivery of submarines and fighter jets, experts told Anadolu Agency (AA) on Friday. "Russia is intensifying its arms deliveries to Syria," said Nikolai Kozhanov, a visiting scholar at Chatham House in London, in an interview with AA on Thursday. "Moscow greatly fears destabilization in the Middle East, which it fears could spread should the situation in Syria come to resemble that of Libya today." Pieter Wezeman, a senior researcher at the Stockholm International Peace Institute in an interview with AA on Friday, explained: "It is very important for Russia to show the world that it is still a great power. … Support for the beleaguered Assad regime is an important means for the Russian government to do this, even when it must provide the funds for the regime to make the arms purchases." Both Kozhanov and Wezeman agreed that there is a lack of up-to-date and accurate statistics about Russian arms deliveries to Syria. According to the winter 2013 issue of the Index of Security published by Moscow-based PIR Center, for Syria, the volume of Russian arms deliveries in from 2008 to 2011 amounted to $1.49 billion, which is expected to rise $2.24 billion in 2015, provided that force majeure circumstances do not violate these plans." Alexander Aksenyonok, the most senior Russian diplomat specializing in Syrian affairs, told the Russian news site Gazeta.ru on Sept. 13 that Russian advisers were in Syria to help prevent the country's breakup, to protect minority groups and to preserve the Russian presence at Syrian ports. According to Aksenyonok, for Russia "the primary objective is to prevent the collapse of state institutions in Syria. Otherwise a 'Somalization' of Syria may take place if militant forces either from ISIS or other organizations take power." Aksenyonok said that the technical supply facilities at the port of Tartos should not be described as a military base. He admitted that there has been an increase in the number of Russian advisors who there to make sure that Syrian soldiers were able to make efficient use of the supplied weaponry. He pointed out that the Russian advisors were helping Syrians organize a line of defense.