UN focuses on war on ISIS as numbers of extremists increase 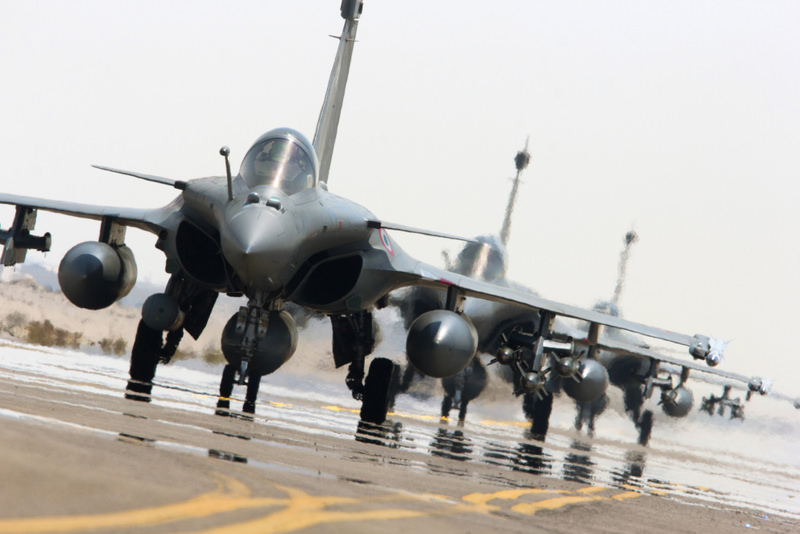 This photo released on Sept. 27, 2015, by the French Army Communications Audiovisual Office (ECPAD) shows French army Rafale fighter jets on the tarmac of an undisclosed air base in support of the US-led coalition against ISIS.
by Daily Sabah with Wires Sep 29, 2015 12:00 am

War on the extremist group has become a focus during the U.N. General Assembly this week, as the number of people going to Syria to join ISIS increases despite strict measures

When world leaders convene for the U.N. General Assembly this week, it will be a year since the U.S. president declared the formation of an international coalition to "degrade and ultimately destroy" the ISIS group.

Despite billions of dollars spent and thousands of airstrikes, the campaign appears to have made little impact. The New York Times reported nearly 30,000 foreign recruits from 100 different countries have entered Syria to join ISIS, doubling the numbers in the past 12 months. It said the situation reveals "stark evidence that an international effort to tighten borders, share intelligence and enforce antiterrorism laws is not diminishing the ranks of new militants."

Australian Foreign Minister Julie Bishop also said the number of Australians joining ISIS in Syria and Iraq doubled in the past year but was not expected to continue to grow so rapidly. "We estimate that there are around 120 Australians currently in Iraq and Syria supporting ISIS and other terrorist groups," Bishop told reporters in New York late Sunday. "That is double the number that I reported here 12 months ago."

The extremist group may control slightly less territory than a year ago, but it continues to launch attacks and maintains key strongholds in Syria and Iraq. The militants' reach has expanded to other countries, including Libya, Egypt's Sinai Peninsula and Afghanistan.

Growing concern about the Syrian refugee crisis and reports that ISIS may be planning attacks against Europe may also spur some countries to get more involved in the anti-ISIS coalition. On Sunday, President Francois Hollande announced that French jet fighters had carried out their first airstrikes against ISIS targets in Syria. France had previously limited its air campaign to ISIS targets in Iraq. But short of sending in ground forces, an option Western countries are not willing to entertain, the stalemate in the war against ISIS is likely to persist.

"Quite simply, the countries best-placed to contribute meaningfully to the anti-ISIS effort do not share the same interests in Syria," said Faysal Itani, a resident fellow at the Atlantic Council, using an alternate acronym for ISIS.

The Russian military buildup of aircraft, missiles, tanks and other equipment is complicating the fight against ISIS militants in Syria. Russia's declared purpose is helping the government of President Bashar Assad battle the extremists, and Moscow has urged the West to go along. In an interview broadcast ahead of his meeting on Monday with President Barack Obama, Russian President Vladimir Putin sharply criticized U.S. military support for Syrian rebels, describing it as illegal and useless.

In Iraq, U.S. efforts to battle the extremists without working with Damascus and its allies could be further complicated by news Sunday that Iraq's military will begin sharing security and intelligence information with Syria, Russia and Iran to help combat the extremist group.

U.S. Secretary of State John Kerry, who met with Russian Foreign Minister Sergei Lavrov on the sidelines of the U.N. General Assembly on Sunday, said in response to a statement by Iraq's military that, "all of the efforts need to be coordinated. This is not yet coordinated." In New York, all eyes will be on Putin, who is expected to announce a counterterrorism initiative when he addresses the General Assembly on Monday, his first UNGA appearance in 10 years.

"The Russian escalation in Syria will create a flurry of diplomatic activity to find a political solution to the Syrian crisis and a fresh attempt to confront ISIS in Syria, but the conditions for success on both fronts are still absent," said Paul Salem, vice president for policy and research at the Washington-based Middle East Institute. "While Putin's call for more efforts to defeat ISIS will fall on welcoming ears in many capitals, the new Russian deployment does not introduce or free up significant numbers of ground forces to make such a campaign plausible," he wrote.

Some analysts say the Russian deployment is likely to make Assad even less inclined to engage in meaningful negotiations for a political settlement to the civil war, which has allowed ISIS to flourish over the past four years.

The Obama administration is adamant that it will commit no U.S. ground troops despite calls from some in Congress to do so. "The whole thing is a joke. They are not serious about destroying ISIS either in Syria or Iraq," said a one-time resident of Raqqa who fled to Turkey. "Dropping a few bombs every now and then will not change anything," he said. He spoke on condition of anonymity to protect his family in Raqqa, the Syrian city ISIS has claimed as the capital of its self-declared caliphate.

The top U.S. commander in the Middle East, Gen. Lloyd Austin, insisted this month that the operation against ISIS was making progress, and said the military had always said the campaign would take time. An ISIS operative, meanwhile, said it was unlikely that Russia would be drawn into the war against the group. Furthermore, he said bickering over the Russian presence in Syria would ultimately benefit the ISIS effort. "Any group that wants to divide Syria up or battle over it for dividing the booty, this will be in our interest," he wrote in an exchange of Skype messages. He spoke on condition of anonymity because members of the group are not allowed to speak to journalists. If Russia joins the coalition, he said: "It makes no difference for ISIS to fight 60 or 80 countries. It is the same."
RELATED TOPICS