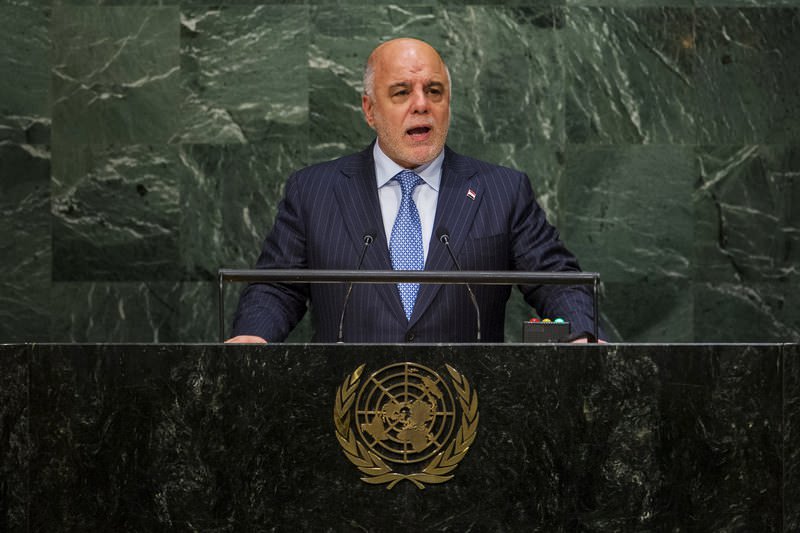 Iraqi PM Haider Al Abadi addresses attendees during the 70th session of the United Nations General Assembly in New York, September 30, 2015. (REUTERS Photo)
by Associated Press
Oct 01, 2015 12:00 am
Iraq's prime minister has said that he would "welcome" military strikes by Russia in his country if Moscow made such a proposal but that hasn't happened yet.

Haider Al Abadi told France 24 television that "If we get the offer, we (will) consider it. In actual fact, I would welcome it," he said, noting that he has been in contact with Russian President Vladimir Putin.

Russia's foreign minister Sergey Lavrov said Thursday that Russia has no plans to extend its airstrikes to Iraq.

In the Iraqi prime minister's interview made available on Thursday, Haider said he would be "amazed" if Russian planes now carrying out air strikes in Syria were going after Syrian opposition rebels rather than ISIS. He said it's in Russia's interest to go after ISIS sites because there are "more than 2,000" Russians ISIS fighters, making them a "national threat." They would "cause havoc" were they to return to Russia.

Haider also made a reference to the sparring between Washington, Moscow and others over finding a solution to the Syrian conflict that broke out in full once Russia began military moves in Syria, Iraq's neighbor.

"Our aim is to bring everybody to fight Daesh, not to fight among themselves," he said, using the Arabic acronym for ISIS.