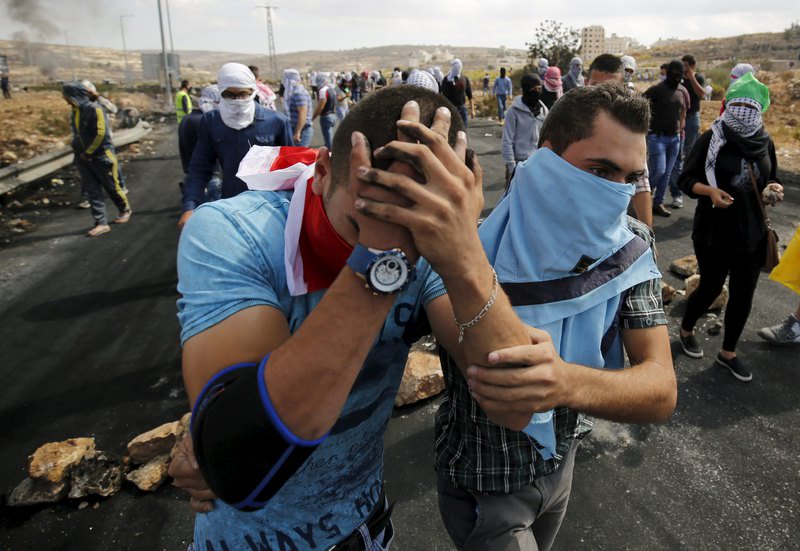 A wounded Palestinian protester is evacuated during clashes with Israeli troops near the Jewish settlement of Bet El, near the West Bank city of Ramallah October 10, 2015. (REUTERS Photo)
by Daily Sabah with Agencies
Oct 10, 2015 12:00 am

Tensions between Israel and Palestine continued to escalate, as 568 Palestinians were injured, 400 of whom by tear gas and 26 by live fire, in clashes in East Jerusalem and West Bank on Saturday, reported Palestinian Red Crescent.

This came after dozens of Palestinians broke through the Gaza security fence, after which five were arrested by Israeli troops early Saturday.

Two Palestinian teens were killed and 10 people were wounded by Israeli fire during clashes near Damascus Gate in East Jerusalem.

A fresh wave of stabbings also hit Israel and the West Bank the same day, including a revenge attack by a Jewish suspect that wounded two Palestinians and two Arab Israelis.

While Prime Minister Benjamin Netanyahu and president Mahmud Abbas have sought to avoid an escalation, frustrated Palestinian youths have defied efforts to restore calm and a wave of stabbings has spread fear in Israel.

Both leaders said they had spoken with US Secretary of State John Kerry, each putting the blame on the other.

Netanyahu said he told Kerry he expected the Palestinian Authority to stop its "wild and mendacious incitement, which is causing the current wave of terrorism".

And Abbas said he reiterated the need for Israeli authorities to stop giving cover to "settler provocations, carried out under the army's protection".

Kerry had shared his "deep concern" over the violence in separate conversations with the two, his office said in a statement, and "stressed the importance of upholding the status quo in word and deed at the al-Haram al-Sharif/Temple Mount and of preventing inflammatory rhetoric and actions that will increase tensions."

A rocket fired by Gaza militants late Saturday was intercepted above southern Israel, the army said.

In the early hours of Saturday a rocket hit southern Israel without causing casualties, shortly after clashes along the border saw Israeli forces kill seven Palestinians.

The Gaza Strip had been mainly calm as unrest has shaken annexed east Jerusalem and the occupied West Bank in recent days.

But clashes broke out on Friday east of Gaza City and Khan Yunis along the border with the Jewish state, with Israeli forces opening fire and killing six Palestinians including a 15-year-old, and wounding 80, according to medics.

These stabbing attacks have been the bloodiest fighting in the territory since the summer 2014 war.