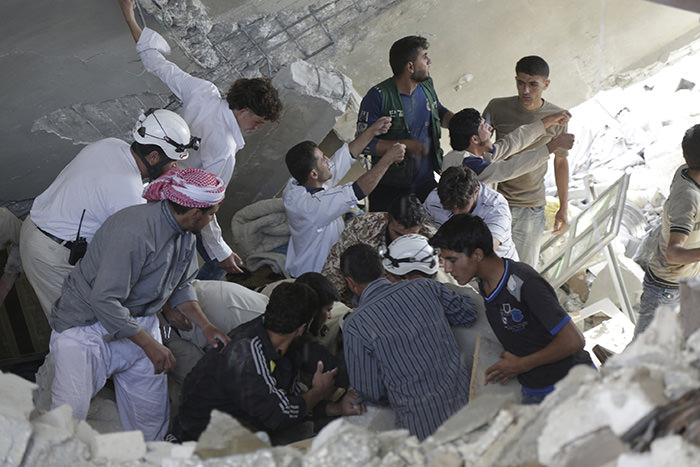 Civil defence members and civilians search for survivors under the rubble of a site hit by what activists said were cluster bombs dropped by Russian air force in Maasran town, south of Idlib, Syria October 7, 2015 (Reuters Photo)
by Anadolu Agency
Oct 12, 2015 12:00 am
An advanced type of Russian-made cluster ammunition was used in an airstrike in northern Syria, the Human Rights Watch (HRW) said Sunday.

The New York-based watchdog suggested that it was either Russia or the Syrian regime that used the deadly weapon, called SPBE, in a reported October 4 attack in the town of Kafr Halab, located south-west of Aleppo.

It said the munitions were most likely deployed from an RBK-500 SPBE cluster bomb, which is the only type of air-dropped bomb capable of delivering this weapon.

"It's disturbing that yet another type of cluster munition is being used in Syria given the harm they cause to civilians for years to come," said Nadim Houry, the group's deputy Middle East director.

"Neither Russia nor Syria should use cluster munitions, and both should join the international ban without delay," he added.

Cluster munitions can house hundreds of smaller sub-munitions including grenades, bomblets and mines. They can be fired by artillery systems or dropped by aircraft, and scattered over a wide area.

Like traditional land mines, they pose a threat for years after the conclusion of an armed conflict because their sub-munitions often fail to explode on deployment.

"The Kafr Halab attack coincides with a surge of video and photographic reports of air-dropped and ground-launched cluster munition attacks in the governorates of Aleppo, Hama, and Idlib since Russia started its air campaign in Syria on September 30," the watchdog said in a statement.

The statement said the attack marked the first time the SPBE munitions were used in the Syrian conflict, which has left more than 250,000 people dead since 2011. At least eight other types of cluster munitions had been reportedly used in the conflict.

It said the group could not conclusively determine whether Russian or Syrian regime forces were responsible for the attack. However, according to independent Armament Research Services organization, the Syrian regime is not known to possess the specific bombs capable of delivering SPBE series sub-munitions, indicating that these are likely to have been employed by Russian forces.

An international treaty, Convention on Cluster Munitions, prohibits the production, transfer, and use of the deadly weapon. Neither Russia nor Syria is among the signatories of the treaty, which entered into force in 2010.

Russia began airstrikes in Syria on Sept. 30 to prop up its ally, President Bashar al-Assad, whose regime has been accused of killing tens of thousands of civilians with indiscriminate attacks, including those carried out using toxic chemicals and barrel bombs.

Moscow says it is fighting against ISIS and other terrorist groups, but Western countries and opposition groups say the strikes primarily targeted moderate opposition forces.

The HRW says it has documented the use of cluster munitions by the Syrian regime since 2012 and by ISIS since the second half of 2014. No other group is known or reported to have used cluster munitions in Syria.

There were about 2,000 casualties from cluster munition attacks and unexploded sub-munitions in Syria from 2012 until the end of 2014, according to data collected by the Cluster Munition Coalition, a civil society group monitoring the implementation of the global treaty.
Last Update: Oct 12, 2015 12:03 pm