Obama: Effective anti-ISIS fight not possible with Assad in power 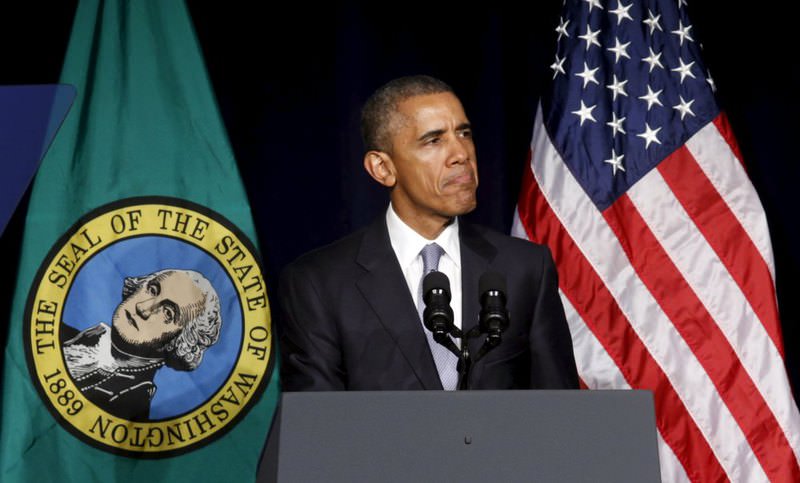 U.S. President Obama said ousting Assad regime from power is essential for fighting ISIS with the moderate Syrian opposition. Describing the civil war as a ‘difficult problem for the entire world community,' he recognized that the U.S. had been unable to ‘change the dynamic inside of Syria'

U.S. President Barack Obama in a televised interview on Sunday said ousting Syrian leader Bashar Assad is essential for fighting ISIS with the moderate Syrian opposition. Indicating that the train-and-equip program, which a U.S. official told The New York Times on Friday has been terminated, was a test for whether a moderate opposition that is willing to fight ISIS could be created, Obama said.

"And what we've learned is that as long as Assad remains in power, it is very difficult to get those folks to focus their attention on [ISIS]," adding that he was "skeptical from the get-go" about the notion of creating an army of moderate forces in Syria.

The New York Times reported on Friday that the "Obama administration has ended the Pentagon's $500 million program to train and equip Syrian rebels, administration officials said on Friday, in an acknowledgment that the beleaguered program had failed to produce any kind of ground combat forces capable of taking on ISIS in Syria."Obama said part of the strategy behind the administration's efforts was to "try different things." He added, "In a situation that is as volatile and with as many players as there are inside of Syria, there aren't any silver bullets."

Describing the Syrian conflict as a "difficult problem for the entire world community," Obama recognized that the U.S. had been unable to "change the dynamic inside of Syria."

A shift in Obama's Syrian policy has become much more obvious regarding the attitude that has been developed against Assad following Russia's intervention with air strikes on ISIS targets, although there have been dozens of reports that claim opposition groups and civilians were hit by the Russian strikes.

Speaking at the UN General Assembly meeting on Sept. 29, Obama said of Assad: "When a dictator slaughters tens of thousands of his own people, that is not a matter of a nation's internal affairs." He added, "The United States is prepared to work with any nation, including Russia and Iran, to resolve the conflict," calling Assad a "tyrant."

The program now has a handful of trained fighters left on the ground to fight ISIS.

Some 75 U.S.-trained fighters entered Syria last week and took up positions on the frontlines against ISIS in Aleppo, according to the Syrian Observatory for Human Rights. Allegedly, however, fighters handed over some of their equipment to the al-Qaida-linked al-Nusra Front last week in return for safe passage in violation of program guidelines.

They were the second group of fighters that were part of the plan. The first group, Division 30, was overwhelmingly defeated in a pitched battle with the al-Nusra Front in July. More than half of the soldiers in Division 30, including the commanding officer, were taken captive or killed, and the whereabouts of 18 other fighters are unknown, a U.S. military spokesman said this month. Questions increased about the future of the program following the development.

Turkish media outlets reported that dozens of fighters withdrew from the program after they refused to sign a contract assuring that they would not fight against the Syrian regime. Many Syrian volunteers prefer to use their training to fight both ISIS and forces loyal to Assad, which was the original aim of the revolution before it became more complicated.

According to the plan, groups of 300 to 2,000 Free Syrian Army (FSA) soldiers were to be trained. However, Pentagon officials reported in August that the program was moving slower than expected due to complications in vetting volunteers and transporting them from Syria for training.