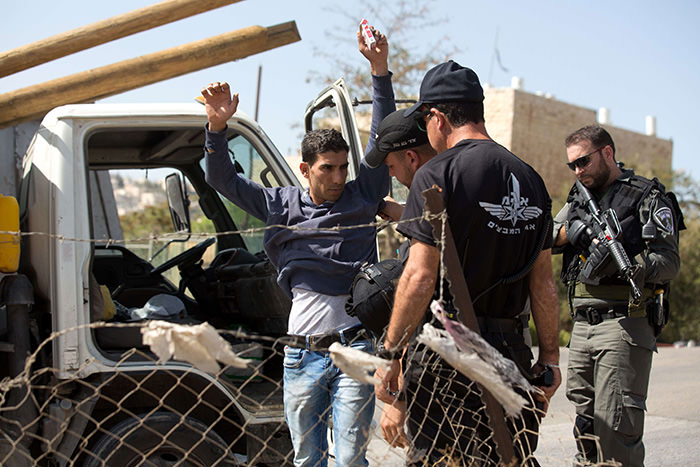 Israeli border policemen check a Palestinian driver on a road linking the Palestinian neighbourhood of Jabal Mukaber in East Jerusalem and Jerusalem on October 14, 2015 (AFP Photo)
by Daily Sabah with Wires Oct 14, 2015 12:00 am

Amid a wave of Israeli-Palestinian violence, Israel has taken new steps, including authorizing police to seal off Palestinian neighborhoods in Jerusalem and deploying soldiers on main roads. Meanwhile, UN Secretary-General Ban Ki-moon urged Israel to review use of police force against Palestinians.

The Israeli government gave police authority to seal off Palestinian neighborhoods in East Jerusalem yesterday and will deploy soldiers on main roads to combat the worst spate of violence across Israel, Jerusalem and the occupied West Bank in years.

Seven Israelis and 30 Palestinians, including children and attackers, have died in two weeks of violence including stabbings, shootings, car ramming and security crackdowns that have stirred memories of past Palestinian uprisings. The causes of the turmoil are multiple, but Palestinians are angry about what they see as increased Jewish encroachment on the Al-Aqsa Mosque compound in Jerusalem's Old City, an area that is holy to both Muslims and Jews.

There is also deep-seated frustration with the failure of years of peace efforts to deliver meaningful change, with Palestinians no closer to statehood and no end to Israeli settlement building in the West Bank and East Jerusalem. Much of the violence since the start of October has been carried out by residents of East Jerusalem, the predominantly Arab side of the city. Israel regards all of Jerusalem as an integral part of the country, so the threat to seal off neighborhoods there is a dramatic escalation in policing.

Human Rights Watch said the measure, which has not yet been imposed but could be carried out if the wave of violence continues, is "a recipe for harassment and abuse." "Locking down East Jerusalem neighborhoods will infringe upon the freedom of movement of all Palestinian residents rather than being a narrowly tailored response to a specific concern," it said in a statement. Israel's Minister for Jerusalem Affairs, Zeev Elkin, told Israel Radio the measure was for security and did not herald a political division of the city.

Palestinians want East Jerusalem as the capital of a future independent state that would include the Gaza Strip and the West Bank. Israel sees all of Jerusalem as its undivided capital.

The cabinet also approved an expansion of the national police, extra guards on public transport and the deployment of army units in "sensitive areas" along the steel and concrete barrier that separates the West Bank.

The military began deploying hundreds of troops in Israeli cities yesterday to assist police forces. Israel also began setting up checkpoints in Palestinian areas of annexed East Jerusalem yesterday. A police spokeswoman said checkpoints were being set up at "the exits of Palestinian villages and neighborhoods in East Jerusalem." The move to install checkpoints followed a decision by Prime Minister Benjamin Netanyahu's security cabinet overnight authorizing police to seal off or impose curfews on parts of Jerusalem.

The cabinet agreed that as well as the punitive measure of demolishing attackers' homes, it would forbid new construction at those sites. Such tactics have been threatened in the past but court challenges have frequently held up the process.

U.S. Secretary of State John Kerry said he would travel to the region to try and ease tensions. "I will go there soon, at some point appropriately, and try to work to re-engage and see if we can't move that away from this precipice," Kerry said.

Meanwhile, UN Secretary-General Ban Ki-moon urged Israel on Tuesday to carry out a "serious review" on whether its security forces are resorting to excessive force in clashes with Palestinians. Ban finds "the apparent excessive use of force by Israeli security forces" to be "troubling," his spokesman, Stephane Dujarric, told reporters as violence continued in Jerusalem and the West Bank city of Bethlehem. This "demands serious review as it only serves to exacerbate the situation leading to a vicious cycle of needless bloodshed," he said.
Netanyahu said Tuesday that Israel would use "all means" available to end violence and that new security measures were planned. A ministerial-level meeting of the Security Council on the crisis in the Middle East is scheduled for Oct. 22.

Tensions flared up between Israelis and Palestinians after Israel announced its expansion of a settlement project, considered illegal by international law, that includes major construction in the area as well as a planned increase in the number of Jewish settlers in the occupied territories. The Palestinian district of East Jerusalem was captured by Israel in the 1967 Six-Day War, and since then Israel has tried to expand its influence over the neighborhood by allowing Jewish settlers to live in the disputed area. This comes after last year's Israeli attacks in the Gaza Strip in which more than 2,100 Palestinians died, including many civilians, according to Palestinian and UN officials.
Last Update: Oct 15, 2015 12:40 am
RELATED TOPICS