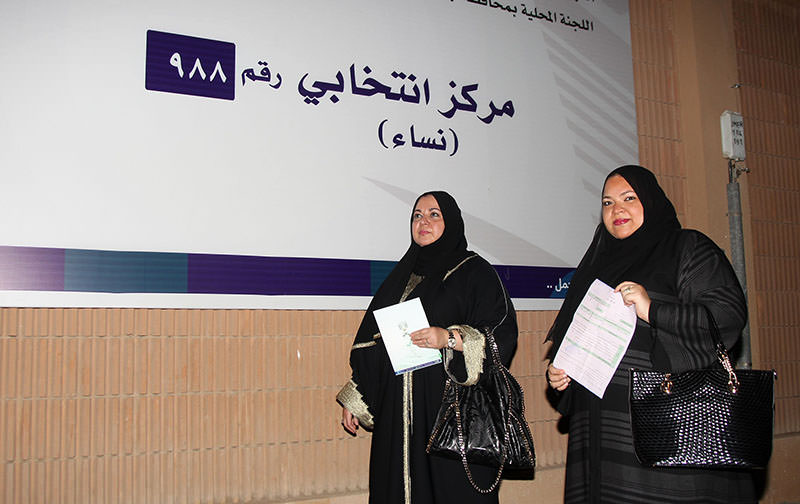 Saudi women hold applications as they head to register to vote in the port city of Jeddah on August 30, 2015 (AFP photo)
by daily sabah
Oct 14, 2015 12:00 am
Women are permitted to run in the polls for the first time in Saudi Arabia in the upcoming December 12 local elections, but they are not in any way in a 'fair competition' with their male counterparts.

An article in Arab News dated October 13, 2015 points out that women candidates have been banned from addressing male voters directly and are required by the Supreme Electoral Committee to appoint "agents" on their behalf.

Not to mention its unjust nature, such a regulation "has resulted in great disappointment among female candidates who see the elections as a real opportunity to participate in decision-making," the article says.

Such a ban obstructs female candidates from meeting with all the voters, unlike the case for male candidates. In this respect, they cannot hold discussions with male voters regarding their campaign platforms, which is likely to hinder their success in the elections, say the female candidates.

Female candidates who violate the aforementioned ban will be fined SR10,000 ($2,667), announced officials. They are also required to acquire permits for their advertising campaigns, and are banned from publishing their photos on any of their election material.

The presence of female candidates - thanks to a decree issued by the late king Abdullah in 2011 - has stirred debate in the country.

Hardline cleric Abdul-Rahman al-Barrak previously said that the participation of women in city councils represented unlawful "mixing" of the sexes and would lead to "Westernization."

In a religious opinion, or fatwa, al-Barrak called on women "not to be a key to corruption in the country."

Users of social media have also circulated fatwas suggesting that women's votes would be exploited by men in their families and tribes.
Last Update: Oct 14, 2015 7:49 pm