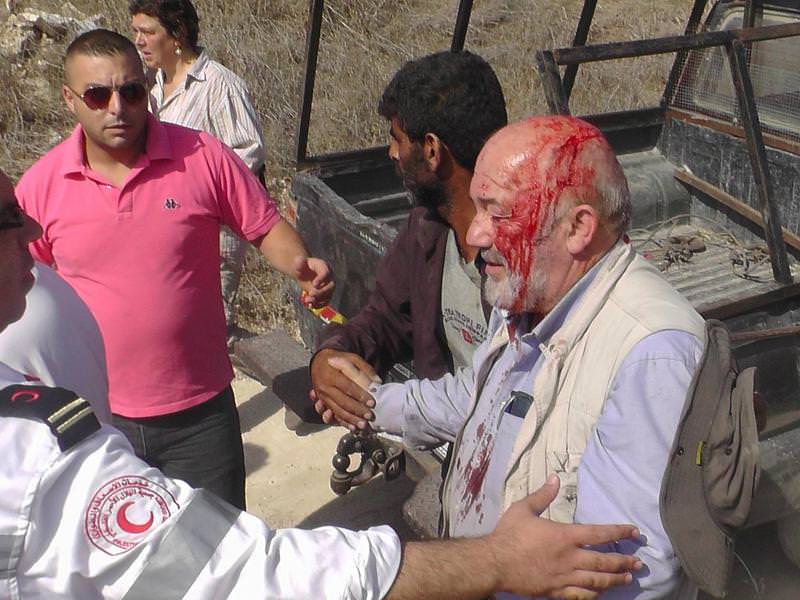 In times when violence in the occupied Palestinian territories has reached its peak, a British national was violently attacked by a gang of Israeli settlers. Fortunately enough, he survived but his wounds and the images of blood spilling over his head show the real extent of the violence that reigns over the sacred lands

David Amos, a British national volunteering in the Israeli-occupied West Bank was attacked on Thursday by a gang of Israeli settlers, according to the British daily the Independent.

The retiree, 66, was hit in the head by a rock thrown by an Israeli gang. Merely trying to protect Palestinian farmers during the olive harvest, the Briton and two other women were shocked upon the attack and even shouted "We are British" in an effort not to be mistaken for Palestinians.

According to the report, the Israeli settlers came down a hill towards the Palestinian farmland near the village of Burin.

"There were eight or nine of the settlers, all masked and they were carrying large rocks," the Independent reported him as saying.

The gang fired gunshots as they approached the Britons, causing him to sit on the ground and tell his colleagues to do so.

"They were shouting at us 'go' in English and Hebrew. A man no more than four feet away from me threw a rock which hit me on the back of my head," Amos said, adding that he was kicked by the Israeli gang upon falling down onto the ground. The victim also added that his colleagues shouted 'We are British' so as not to be attacked but that wasn't enough to prevent the attack.

He was later evacuated from the area by ambulance and taken to a hospital in Nablus, where he received five stitches.

Criticizing the discriminative attitude of the State of Israel against non-Jews, he said that he would file a complaint with the police even though he is desperate about the result as such complaints very scarcely lead to indictments.

Amos said that he came to West Bank for one of the most anticipated events in Palestine, The Olive Harvest organized by a British non-governmental organization named the Holy Land Trust. The Olive Harvest is an event to promote nonviolence in the region and aims to protect Palestinian olive farmers, he said.

Tensions flared up between Israelis and Palestinians after Israel announced its expansion of a settlement project, considered illegal by international law, which includes major construction in the area as well as a planned increase in the number of Jewish settlers in the occupied territories.

The Palestinian district of East Jerusalem was captured by Israel in the 1967 Six-Day War, and since then Israel has tried to expand its influence over the neighborhood by allowing Jewish settlers to live in the disputed area. This comes after last year's Israeli attacks in the Gaza Strip in which more than 2,100 Palestinians died, including many civilians, according to Palestinian and U.N. officials.
Last Update: Oct 16, 2015 11:17 pm
RELATED TOPICS