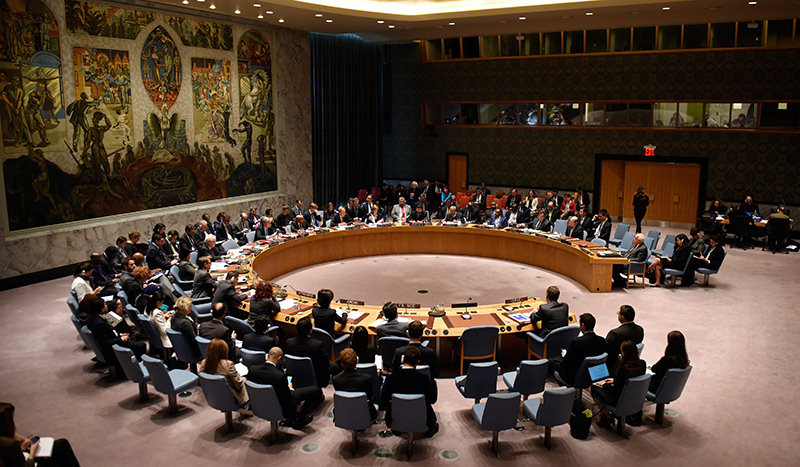 The United Nations Security Council meets on the violence between Israelis and Palestinians at United Nations headquarters in New York, New York, USA, 16 October 2015. 34 Palestinians have been killed by Israeli gunfire in the past month (EPA Photo)
by Associated Press Oct 17, 2015 12:00 am
The Palestinians urged the U.N. Security Council on Friday to immediately provide international protection for the Palestinian people in an escalating conflict with Israel, which rejected any international presence at Jerusalem's holiest site.

The exchange at an emergency council meeting called by Arab states after a spate of Palestinian stabbing attacks and an Israeli security crackdown highlighted the deepening anger and distrust between the two sides after decades of conflict.

Palestinian U.N. Ambassador Riyad Mansour told the council the issue of protection "has become more urgent than any time before" because of what he called Israeli aggression "against our defenseless Palestinian people," including at the Jerusalem site that includes the al-Aqsa mosque, the third most sacred place in Islam, and the ancient Hebrew Temple Mount, the holiest place in Judaism.

Mansour called on the council to implement a 1994 resolution adopted after a Jewish settler killed 29 Muslim worshippers at a holy site in Hebron. It called on Israel "to guarantee the safety and protection of the Palestinian civilians throughout the occupied territory" including by "a temporary international or foreign presence," and to disarm settlers.

But Israel's new U.N. Ambassador Danny Danon repeated Prime Minister Benjamin Netanyahu's commitment not to change the status quo at the site and told reporters before the emergency meeting that "Israel will not agree to any international presence on the Temple Mount." His deputy, David Roet, repeated the same words minutes later in the Security Council chamber.

Danon said "any such intervention would violate the decades-long status quo."

Jordan's U.N. Ambassador Dina Kawar, whose country is custodian of the al-Aqsa compound, said Jordan is not pushing for a new international force. But she said Israeli security forces should stay away from al-Aqsa.

He said "this stark reality" has been compounded by increasingly dire economic conditions, including bleak employment prospects for Palestinian youths and expanding Israeli settlement activities.

Delattre also called for a meeting of the Quartet of Mideast mediators the U.S., U.N., EU and Russia along with key Arab nations to work on confidence-building measures to ease tensions, support Palestinian reconciliation, and draw up "guarantees and compensation that each party will need" in order to sign a peace agreement.
Last Update: Oct 17, 2015 9:44 am
RELATED TOPICS