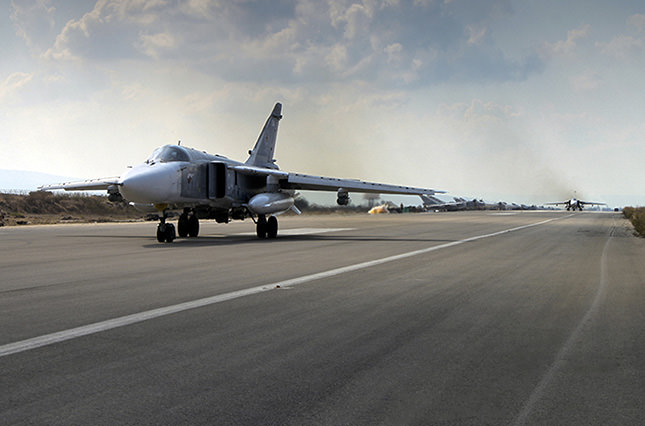 A Russian SU-24M jet fighter prepares to take off from an airbase Hmeimim in Syria. (AP Photo)
by Compiled from Wire Services Oct 17, 2015 12:00 am
Russia's air force has made 36 sorties, hitting 49 ISIS targets in Syria in the last 24 hours, the Russian Defence Ministry said in a statement on Saturday.

The targets were hit in Hama, Idlib, Latakia, Damascus and Aleppo regions, it said.

On Monday, the U.K.-based Syrian Network for Human Rights documented the deaths of 104 civilians, including 25 children and 15 women, who were killed in Russian airstrikes since September 30.

Russia began carrying out airstrikes in war-torn Syria on September 30. According to the Kremlin, the strikes are aimed at supporting its ally the Assad regime against ISIS.