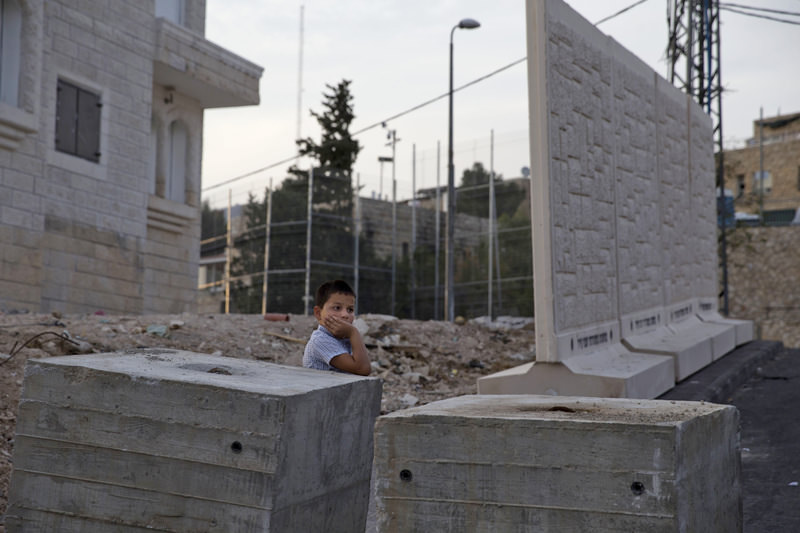 A Palestinian boy stands by concrete barrier between the Arab neighborhood of Jabal Mukaber and the Jewish area of Armon Hanatziv in east Jerusalem, Sunday, Oct. 18, 2015. (AP Photo)
by Associated Press Oct 18, 2015 12:00 am
Israeli police erected a barrier to separate Jewish and Arab neighborhoods in east Jerusalem on Sunday, part of a series of unprecedented measures meant to stop a wave of violence that has roiled the city.

Police spokeswoman Luba Samri said the barrier, a row of six concrete slabs about five meters (16 feet) high, was meant to seperate the Jewish neighborhood of Armon Hanatziv from Jabal Mukaber, an adjacent Palestinian neighborhood which has witnessed many Israeli-Palestinian violent clashes.

Israeli authorities have blocked roads and placed checkpoints at the entrance to Jabal Mukaber and other Arab neighborhoods in east Jerusalem. Other security measures include ID checks and body searches, while soldiers have been deployed in Jerusalem and cities across Israel.

But erecting a barrier dividing areas of Jerusalem is a sensitive step, testing Israel's repeated statements over the years that the city is its undivided, eternal capital.

Israel captured east Jerusalem in the 1967 Mideast war and later annexed the area in a move that is not recognized internationally. The Palestinians want east Jerusalem as the rightful capital of their state.

"This has no political meaning, said Emmanuel Nahshon, a spokesman for Israel's foreign ministry. "It's one more aspect of our security measures."

Samri, the police spokeswoman, said the barrier would remain "for as long as needed" and that it could be lengthened based on security needs.

On Sunday, the six slabs lined a sidewalk on a road between the Jewish and Arab neighborhoods. Writing in Hebrew on the barrier said it was a "temporary, mobile police barrier." It did not prevent pedestrians from leaving or entering.

The wave of violence erupted in Jerusalem a month ago over tensions surrounding a Jerusalem holy site sacred to Jews and Muslims. It soon spread to Arab neighborhoods of east Jerusalem and then to the West Bank, Gaza and Israel.

Israeli leaders say the violence is due to Palestinian incitement. But Palestinians say it is the result of years of Israeli occupation, failed peace efforts and lack of hope among their youth.

Much of that hopelessness is found in Arab areas of east Jerusalem. They complain of discrimination, noting that municipal services from education to garbage pickup in their areas are neglected.

Palestinians make up a third of the city's population and they mainly live in east Jerusalem, whereas the remaining Jewish population mostly lives in the city's western sector.

Over the past month, 40 Palestinians were killed by Israeli fire, including 19 labeled by Israel as attackers, and the rest in clashes with Israeli troops.

The almost-daily clashes have caused a sense of panic across the country and raised fears that the region is on the cusp of a new round of heavy violence.

The outbreak was fueled by rumors that Israel was plotting to take over Jerusalem's most sensitive holy site, a hilltop compound revered by Jews as the Temple Mount and home to the Al-Aqsa Mosque, Islam's third-holiest shrine and a key national symbol for Palestinians.

Israel has adamantly denied the allegations, saying it has no plans to change the status quo at the site, where Jews are allowed to visit but not pray. It accuses the Palestinians of inciting to violence through the false claims.

Israeli Prime Minister Benjamin Netanyahu said Sunday that his government would start going after the finances of the Islamic Movement in Israel, a group he accuses of being the chief inciter of the recent violence.