Low turnout in Egypt's parliamentary election amid absence of opposition 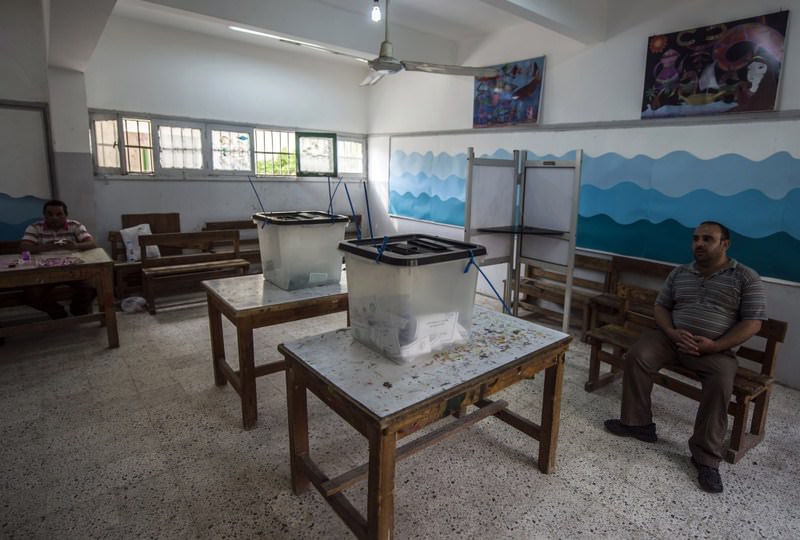 Egyptian officials sit in an empty polling station in Cairo's Giza district on the second day of voting in the country's parliamentary elections.
by Daily Sabah with Wires Oct 20, 2015 12:00 am

Egypt is holding parliamentary elections after two years under the shadow of a number of repressive measures enacted by President el-Sissi's government. Egyptians showed none of the enthusiasm witnessed in its first democratic elections with very low turnout numbers on Sunday

Egyptians went to the polls on Sunday to elect members of a new parliament, the first since the mid-2013 ouster of President Mohammed Morsi, Egypt's first democratically elected president and a leader of the Muslim Brotherhood. Turnout was low on Sunday to vote in the first phase of an election hailed by President Abdel-Fattah el-Sissi and shunned by critics who say the new chamber will rubber stamp his decisions. There were no official or reliable figures available on Sunday's turnout, expected to be as low as 10 percent.

The vote for the much-delayed 596-member parliament is being staged in two phases ending on Dec. 2, with Egyptians abroad casting their votes for the first round as of Saturday. More than 55 million Egyptians are eligible to vote in the two-phase election in which 448 parliamentary candidates will be chosen for individual seats and another 120 from party lists. But with an absence of opposition parties, including the now banned Muslim Brotherhood that has faced a deadly government crackdown overseen by Sissi, the election has inspired none of the enthusiasm witnessed for Egypt's first democratic elections in 2011.

"There's no incentive to vote," declared Mohammed Mahmoud, 38, owner of a carpentry workshop across the street from a polling center in Boulaq el-Dakrour, one of the most densely populated districts in Egypt. "Even if a candidate has a platform, I don't think it's true. I don't think it will be implemented. It will just be talk," he said in Cairo's twin city of Giza, located in one of 14 provinces in which the first of two days of voting took place on Sunday. Final results will be announced in early December and the new parliament will hold its inaugural session shortly after.

Experts say the election's outcome is a foregone conclusion and only voter turnout will be a gauge of popularity for Sissi, who toppled president Morsi in 2013.

Hazem Hosny, a political science professor at Cairo University, said: "This parliament will be a parliament of the president. … It's really a parliament ... to keep things as they are, to give an image of democracy."

The vote is being boycotted by political parties that supported Morsi, including the Wasat Party and the Strong Egypt Party of former Muslim Brotherhood leader Abdel-Moneim Aboul-Futouh. The April 6 Youth Movement, which was at the forefront of a popular uprising that ousted autocratic President Hosni Mubarak in 2011, is also boycotting the polls.

The election had been originally slated for March, but was postponed following a decision by Egypt's constitutional court, which ruled that the laws governing Egypt's electoral districts were unconstitutional.

In a televised speech on Saturday, Sissi, a former general who spearheaded Morsi's ouster, called on all Egyptians to take part in the vote. The parliamentary election represents the final phase of a political road map imposed by the military following Morsi's downfall. The military's road map also included a constitutional referendum and a presidential election, the latter of which brought Sissi to power.

Critics of Egypt's military-backed regime, however, say the polls are being held in the absence of any genuine opposition. Morsi's now outlawed Muslim Brotherhood group swept Egypt's last parliamentary election, which was held in 2011 following Mubarak's ouster. The Egyptian authorities, however, citing flawed electoral laws, dissolved the assembly the following year.

Egypt has not had a parliament since the dissolution of its 2012 assembly and has been roiled by violence and turmoil since the military coup led by Sissi. Morsi, the country's first freely elected civilian president has been imprisoned since mid-2013 after he had served only one year in office.

After mass protests against him, Sissi launched the fiercest crackdown on dissent in Egypt's modern history. Emboldened by a population longing for stability after the turmoil that followed Mubarak's ouster, Egyptian authorities under Sissi have gradually shown less and less tolerance for dissent. In the more than two years since, security forces have killed hundreds and detained tens of thousands of Muslim Brotherhood members and Morsi supporters. Since Morsi's ouster, Egyptian courts have sentenced more than 1,700 people, including Morsi, to death, although only seven of these have been carried out to date. The remaining death sentences face appeals by the defendants, have been overturned by the courts or are still awaiting the approval of Egypt's grand mufti, the country's top religious authority. Restrictions on demonstrations have all but killed street activism while human rights abuses by police go mostly unpunished and authorities have shown little concern over recent cases of young pro-democracy or Muslim Brotherhood-linked activists disappearing.
RELATED TOPICS