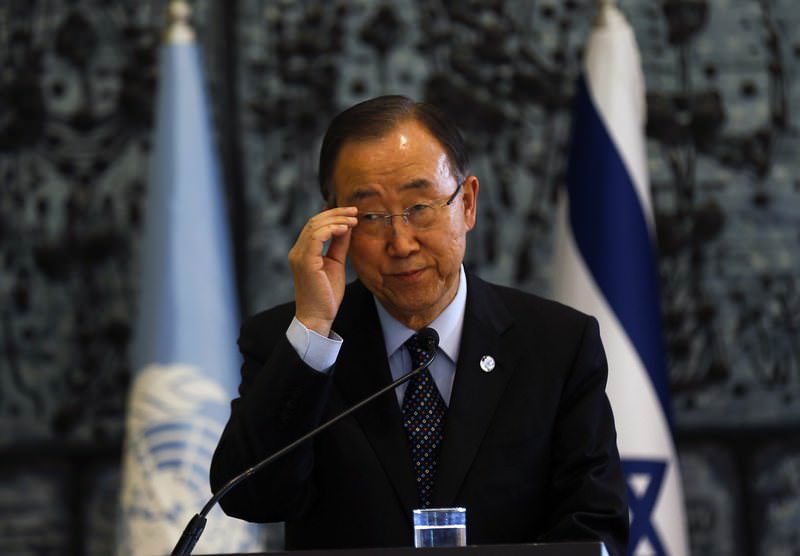 UN Secretary General Ban Ki-moon speaks during a joint press conference with Israeli President Reuven Rivlin in Jerusalem, Israel, 20 October 2015. (EPA Photo)
by Daily Sabah with AP
Oct 20, 2015 12:00 am
United Nations Secretary-General Ban Ki-moon called for calm during a surprise visit to Jerusalem on Tuesday ahead of meetings with Israeli and Palestinian leaders, in a high-profile gambit to bring an end to a month-long wave of violence.

Ban arrived from Europe Tuesday afternoon and is set to meet with Palestinian President Mahmoud Abbas in the West Bank and Israeli Prime Minister Benjamin Netanyahu.

He called for calm during a press conference with Israeli President Reuven Rivlin and said "no society should live in fear."

"My visit reflects the sense of global alarm at the dangerous escalation in violence between Israelis and Palestinians," he said.

"I am here to encourage and support all efforts to lower tensions and prevent the situation from spinning out of control."

Ban added, "It's not too late to avoid a broader crisis."

Prior to the visit, Ban issued a video message late Monday calling for calm on both sides.

"I know your hopes for peace have been dashed countless times. You are angry at the continued occupation and expansion of settlements," he said. "I am not asking you to be passive, but you must put down the weapons of despair."

Addressing Israelis, he said there was no military solution.

"But walls, checkpoints, harsh responses by the security forces and house demolitions cannot sustain the peace and safety that you need and must have," he added.

The U.N. chief's visit comes amid unrest that erupted a month ago over tensions surrounding a Jerusalem holy site sacred to Jews and Muslims. It soon spread to Arab neighborhoods of east Jerusalem and then to the West Bank, Gaza and Israel. Clashes between Palestinian civilians and Israeli police have raised fears that the region is on the cusp of a new round of bloodshed.

The initial outbreak of violence was fueled by rumors that Israel was plotting to take over Jerusalem's most sensitive holy site, a hilltop compound revered by Jews as the Temple Mount and home to the Al-Aqsa Mosque, Islam's third-holiest shrine and a key national symbol for the Palestinians.

The violence continued in the West Bank on Tuesday.

Earlier, a 24-year-old Palestinian was shot dead by Israeli forces, the Israeli military and Palestinian health officials said. The military said it happened during a protest by Palestinian demonstrators.

Over the past month, 43 Palestinians were killed by Israeli fire, including 21 labeled by Israel as attackers, and the rest in clashes with Israeli troops. An Eritrean migrant died after being shot by a security guard and beaten by a mob that mistakenly believed he was a Palestinian attacker.