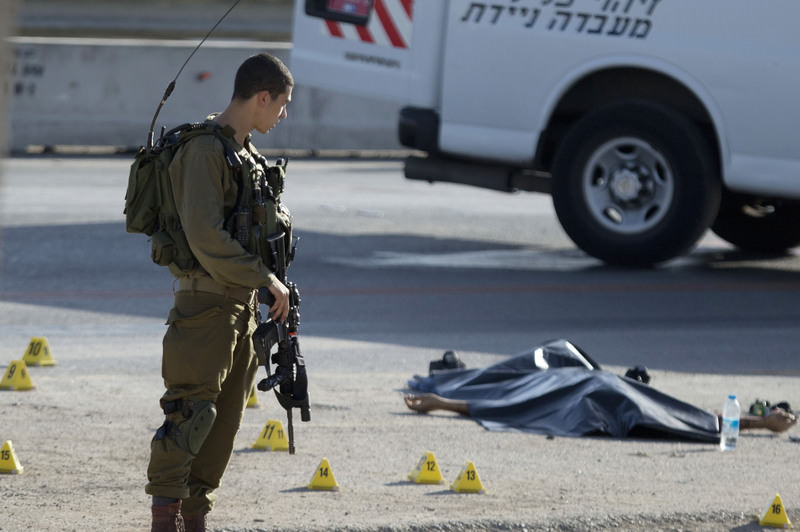 by Daily Sabah with AA Oct 22, 2015 12:00 am
Israeli violence against Palestinian civilians continues as the Israeli forces killed another Palestinian man on Thursday in the occupied West Bank, bringing the death toll to 53, while the tension between the two parties has reached its pike in the recent months.

Israeli authorities also arrested 959 Palestinians since the beginning of the month, a Palestinian NGO said.

Israeli police spokesman Micky Rosenfeld claimed that two Palestinians who had "attempted to hijack a bus" in the Israeli city of Beit Shemesh were shot by Israeli police officers.

One Israeli, he added, had been slightly injured in the attack, while one of the two Palestinians later succumbed to his injuries at Western Jerusalem's Hadassah Ein Kerem Hospital.

According to the Palestinian Health Ministry, the total number of Palestinians killed by Israeli forces since the start of October now stands at 53, including 11 children and a woman.

Over the same period, at least 1,900 Palestinians have been injured by Israeli gunfire, while thousands of others have suffered temporary asphyxia as a result of the excessive use of teargas by the Israeli security forces, the ministry said.

Since the beginning of October, the NGO added, the Israeli authorities had arrested 959 Palestinians: 615 in the occupied West Bank; 184 in occupied East Jerusalem; and 172 from Arab villages inside Israel.

According to the Palestinian Ministry of Prisoners' Affairs, more than 6,000 Palestinians are currently languishing in detention facilities throughout the self-proclaimed Jewish state.

"As many as 30 Jewish settlers forced their way into the Al-Aqsa compound under protection of Israeli police," the Palestinian director of Al-Aqsa affairs, Sheikh Azzam al-Khatib, told Anadolu Agency.

"They [the settlers] toured the compound, passing by the Al-Qibali and Al-Marwani mosques," he said.

The settlers eventually left the compound through the Al-Rahmeh Gate with no clashes reported, according to al-Khatib.

Israeli police, he added, had confiscated the identity cards of Palestinian men and women before allowing them to enter the mosque compound.
Last Update: Oct 22, 2015 11:10 pm
RELATED TOPICS