Israeli soldiers kills Jew, mistaking him for a Palestinian 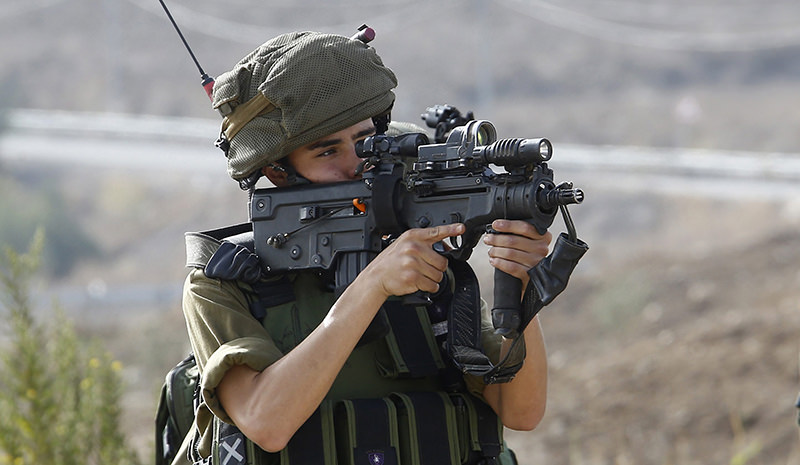 An Israeli soldier aims his gun at unarmed Palestinian protesters at the Howara checkpoint near the West Bank city of Nablus. (Photo EPA)
by Associated Press Oct 22, 2015 12:00 am
An Israeli soldier shot and killed a Jewish man he suspected of being a Palestinian "attacker", police said Thursday.

The shooting came as Prime Minister Benjamin Netanyahu was in Germany for talks with U.S. Secretary of State John Kerry on how to restore calm. Kerry is set to meet with the Palestinians this weekend.

Police spokesman Micky Rosenfeld said soldiers deployed in Jerusalem demanded late Wednesday that the man show them his ID. The man refused, scuffled with the soldiers and then attempted to seize one of their weapons. A private security guard nearby shot the man, and one soldier also opened fire. The man later died of his wounds.

Police said the soldiers claimed the man had asked to see their IDs and proclaimed, "I am ISIS," referring to the ISIS terror organization.

"The soldiers had high suspicions that he was a terrorist," Rosenfeld said. Police later said the man was a 28-year-old resident of Jerusalem, without providing further details.

Many Palestinian residents of Jerusalem have been afraid to leave their homes for fear of getting attacked.

The Palestinians say the violence is rooted in frustration at decades of living under Israeli occupation, while Israel accuses Palestinian leaders of inciting the unrest.

Diplomatic efforts have kicked off in a bid to quell the violence. U.N. Secretary-General Ban Ki-moon met with Israeli and Palestinian leaders during a visit to the region this week and then offered the Security Council a grim assessment of prospects for defusing the violence.
Last Update: Oct 22, 2015 3:11 pm
RELATED TOPICS