US plans to sell eight F-16 fighter jets to Pakistan 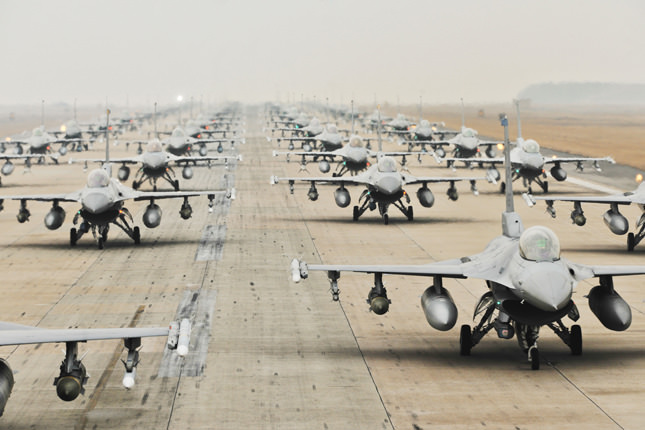 by Anadolu Agency Oct 22, 2015 12:00 am
The U.S. plans to sell eight F-16 fighter jets to Pakistan, its close ally in the so-called "war on terror", despite Washington's reservations over Islamabad's nuclear program, according to reports in the U.S. media.

If the deal goes through, the new aircraft will be added to the Pakistani air force's sizeable fleet, which already includes over 70 F-16s and dozens of French and Chinese aircraft, the New York Times reported on Thursday.

The proposed sale, however, which can still be blocked by U.S. Congress, amounts to little more than a symbolic move, say analysts, as Islamabad has been involved in an aggressive joint venture for the procurement and manufacture of Chinese aircraft, particularly the JF-17 Thunder jet fighter.

According to the New York Times, Congress was informed of the proposed sale only two days ago, while it remains unclear whether the administration of U.S. President Barak Obama would announce the deal during Pakistani Prime Minister Nawaz Sharif's current visit to Washington.

Last month, Islamabad bought four MI-17 fighter jets from Russia and hopes to strike more defense deals with Moscow -- a clear sign it is no longer dependent solely on Washington for its military needs.

In May, Washington reportedly delivered 14 combat aircraft, 59 military trainer jets and 374 armored personnel carriers -- all of which had been earlier used by U.S. forces in Afghanistan -- to Pakistan.

And one month earlier, the U.S. State Department approved Islamabad's request for billions of dollars' worth of military hardware.

According to the New York Times, it remains unclear whether the proposed F-16 sale will be approved by Congress, which is already locked in a standoff with the U.S. State Department over the proposed sale of used Navy cutter vessels to Pakistan.

Security analysts, meanwhile, see the proposed sale as little more than an attempt by Washington to compensate Islamabad, which remains uncomfortable over burgeoning defense ties between the U.S. and India.

"This [the F-16 sale] is merely symbolic; it's an attempt to pacify Pakistan, which is still important for Washington within the context of Afghanistan," Rahimullah Yusufzai, a Peshawar-based security analyst, told Anadolu Agency.

"Otherwise," he said, "there is no significance to this tiny deal."

"Pakistan was demanding a similar nuclear civil technology deal with Washington, which it struck with India in 2005," he added. "But since there was no possibility for that, this is a win-win situation for both Islamabad and Washington."

Another reason for the proposed sale, Yusufzai believes, is that Washington does not want Islamabad to entirely diversify its military procurement options away from the U.S.

"Islamabad has already felt the winds of change. It is now looking for other options in terms of its military needs," Yusufzai said.

"Earlier, it [Pakistan] only had China as a substitute for America in terms of its military needs. But now, it also has Russia," he added, referring to recent defense and energy deals between Islamabad and Moscow.

Last week, for example, the two countries inked a $2-billion agreement for the construction of an 1,100-kilometer gas pipeline linking the port city of Karachi to northeastern Lahore.

Yusufzai, for his part, sees a positive aspect of this arrangement for Islamabad.

"It means President Obama will not be in a strong position to pressure Sharif [during the latter's Washington visit] vis-à-vis Islamabad's nuclear program," he said.
Last Update: Oct 22, 2015 3:24 pm
RELATED TOPICS