UN chief pessimistic over clashes between Israelis and Palestinians 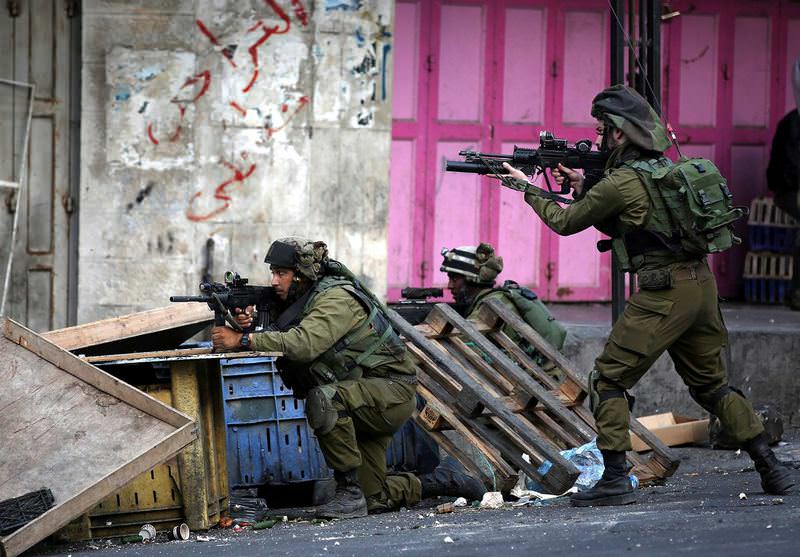 Israeli soldiers take up position during clashes with Palestinian protesters in the West Bank city of Hebron.
by Daily Sabah with Wires Oct 23, 2015 12:00 am

After holding talks with both Israeli and Palestinian sides, U.N. Secretary-General Ban Ki-moon is pessimistic over the unabated clashes as tensions remain high and daily attacks and killings continue

U.N. Secretary-General Ban Ki-moon offered the Security Council a grim assessment on Wednesday of prospects for defusing the latest wave of violence between Israel and the Palestinians, a British diplomat said. British Ambassador Matthew Rycroft said council members were "struck by the pessimistic tone" Ban took during the closed video briefing. Ban spoke to council members after meeting with Israeli and Palestinian leaders during a surprise trip to the Middle East. Rycroft said Ban "thought there was a very wide gap" between the two sides "both on the short term, on how to deescalate, and on the longer term to go back to a genuine political process leading to a two-state solution." Rycroft said the U.N. chief told the council that "all of those with influence need to use it to de-escalate the situation." Rycroft said it was "very important that the whole international community including the Security Council use whatever is in our power to halt the escalation of violence." But he expected no concrete action to emerge from a Security Council ministerial meeting on the Middle East planned for Thursday, though he added "we continue to live and hope." Ban's briefing coincided with his decision to send the council a 42-page document on U.N. historical precedents for "the protection" of people. It was prepared by the U.N. Secretariat in response to a letter on July 21, 2014 from Palestinian President Mahmoud Abbas requesting that "the territory of the state of Palestine be placed under an international protection system by the United Nations," with the central aim of "ensuring the protection of the Palestinian people." The Palestinians have been pressing for the report to be sent to the Security Council. In a letter on Wednesday, the secretary-general said he decided to share the report with the council in response to inquiries and "the interest that has been generated."

However, U.S. Secretary of State John Kerry hopes talks this week with the Israel and Palestinian leaders will provide some "political breathing space" amid renewed unrest. Kerry will meet Palestinian leader Mahmud Abbas in Amman at the weekend, spokesman John Kirby said Wednesday. "The secretary feels it's important to go and to have these discussions, given the ongoing violence, to try to look for ways to end that violence and to restore calm," Kirby said. "As well as to provide some political breathing space, so that real, meaningful progress can be made towards an end to the violence." Asked what such a breathing space might look like, Kirby said: "Just enough of a sense of calm, trying to arise at some level of agreement that can foster more security and more stability." The State Department spokesman repeated Kerry's calls for both sides to avoid inciting unrest, but refused to condemn Israeli Prime Minister Netanyahu's shock allegation that a Palestinian leader had inspired the Nazi Holocaust. Netanyahu sparked uproar in Israel on Wednesday for suggesting that a World War II-era Palestinian leader convinced the Nazis to adopt their Final Solution to exterminate European Jews. Speaking to a group of Jewish leaders Tuesday, Netanyahu tried to use a historical anecdote to illustrate his point that Palestinian incitement surrounding Jerusalem's most sensitive holy site goes back decades. He said the World War II-era Grand Mufti of Jerusalem, Nazi sympathizer Haj Amin al-Husseini, instigated Palestinian attacks on Jews over lies that they planned to destroy the Temple Mount. "Hitler didn't want to exterminate the Jews at the time, he wanted to expel the Jews," Netanyahu told the group. "And Haj Amin al-Husseini went to Hitler and said, 'If you expel them, they'll all come here.' 'So what should I do with them?' he asked. He said, 'Burn them.'"

The tensions between Israelis and Palestinians remain high as daily attacks on both sides continue. An Israeli soldier shot and killed a Jewish man he suspected was a Palestinian "terrorist" in Jerusalem, police said Thursday. Police spokesman Micky Rosenfeld said soldiers deployed in Jerusalem to reinforce police demanded late Wednesday that the man show them his ID. The man refused, scuffled with the soldiers and then attempted to seize one of their weapons. One soldier shot the man, who later died of his wounds, Rosenfeld said. "The soldiers had high suspicions that he was a terrorist," he said. Israeli media said the man had asked for the soldiers' IDs first, but Rosenfeld was not able to confirm that detail. He said the incident is under investigation. I

sraeli police also said two Palestinians stabbed an Israeli at a bus stop on Thursday after they tried to board a bus ferrying children to school. Police shot the two men, one of whom later died while the other was seriously wounded. Police said the Israeli man was moderately wounded.
RELATED TOPICS