Al-Aqsa Mosque to be under 24-hour video surveillance 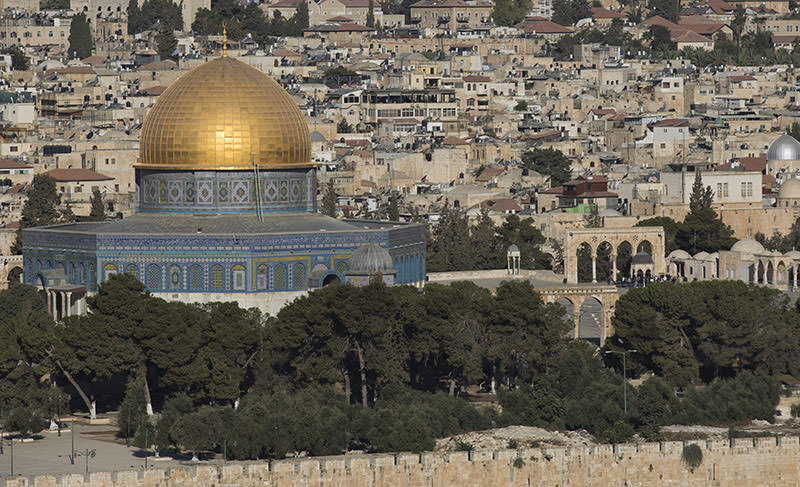 Al-Aqsa mosque compound in the Old City of Jerusalem, 28 September 2015 (EPA photo)
by Compiled from Wire Services Oct 24, 2015 12:00 am
US Secretary of State John Kerry announced Saturday that Israel and Jordan had agreed on new measures for Jerusalem's flashpoint Al-Aqsa mosque compound, including 24-hour security cameras.

Israeli Prime Minister Benjamin Netanyahu was to announce details of the measures later the same day, Kerry said after a meeting in Amman with Jordan's King Abdullah II, custodian of the holy site in Israeli-annexed east Jerusalem.

He said the premier had agreed to "an excellent suggestion by King Abdullah to provide 24-hour video coverage of all sites" in the compound, which is sacred to both Jews and Muslims.

"This will provide comprehensive visibility and transparency and that could really be a game changer in discouraging anybody from disturbing the sanctity of the holy site."

Kerry, who met Netanyahu in Berlin on Thursday, also said the Israeli leader had "reaffirmed Israel's commitment" to upholding the status quo at the mosque compound under which Jews are allowed to visit but not pray.

Tensions over the holy site have sparked a recent wave of violence that has seen clashes between Palestinians and Israeli security forces.

On Friday, Israel lifted restrictions on Muslim worshippers after having barred younger Muslim men seen by police as the main potential trouble-makers from entering the compound on Fridays, the main day of prayer in the Muslim religious week.

The bans had, at times, targeted men up to the age of 50 and fueled Palestinian fears that Israel was trying to change long-standing understandings.

Those fears have also been fueled by a rise in visits to the shrine by Jewish activists demanding prayer rights, including senior members of Netanyahu's coalition government.

Describing what he has heard in the talks with the leaders, Kerry said that "all of them expressed their strong commitment to ending the violence and restoring the calm as soon as possible."

He said the U.S. "strongly condemns terrorist attacks against innocent civilians. There is absolutely no justification for these reprehensible attacks."

He added: "It is important to stop the back and forth of language that gives anybody an excuse to somehow be misinterpreted or misguided into believing that violence is a viable option.
Last Update: Oct 24, 2015 6:04 pm
RELATED TOPICS