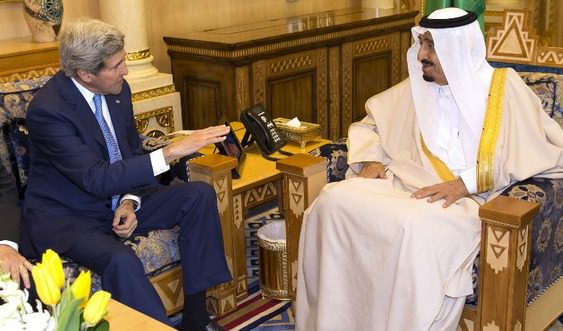 According to the official Saudi Press Agency, the two men discussed recent developments in the region, especially in the Israeli-occupied Palestinian territories -- where more than 50 Palestinians have been killed this month by Israeli security forces -- and in war-ravaged Syria.

Kerry, who is currently on a tour of the troubled Middle East region, arrived in Riyadh on Saturday evening from Jordan.

Before leaving Amman, Kerry announced that an agreement had been reached between Israel and Jordan calling for the installation of cameras in East Jerusalem's flashpoint Al-Aqsa Mosque, which has been the site of recent violent clashes between Palestinian Muslim worshippers and Israeli security forces.

Since the start of October, at least 55 Palestinians and 10 Israelis have been killed in violence -- which Kerry's trip to the region is ostensibly aimed at ending -- in Israel, the Israeli-occupied West Bank and the blockaded Gaza Strip.