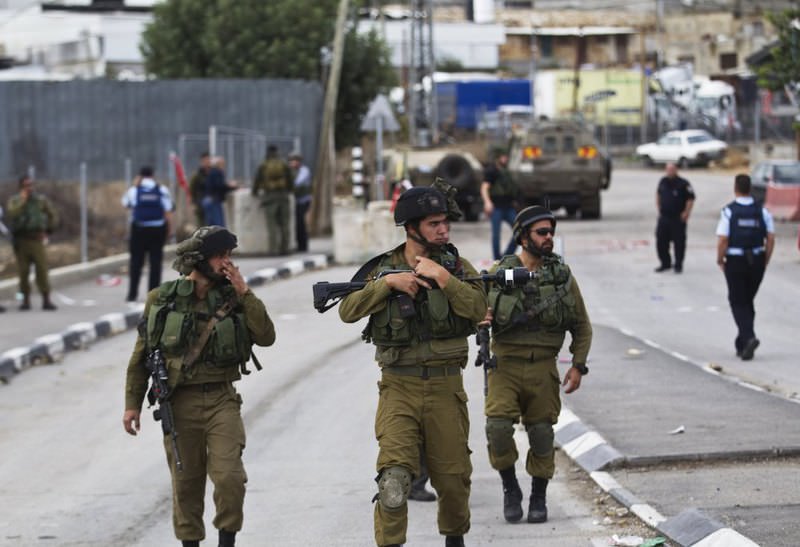 Israeli soldiers at the scene of a stabbing near the West Bank town of Hebron.
by Daily Sabah with Wires Oct 27, 2015 12:00 am

Following new measures, including 24-hour video monitoring of the Al-Aqsa mosque compound, fresh Israeli-Palestinian violence has been reported and a total of 68 people have been killed since the beginning of the recent unrest in the region

Fresh violence flared between Israelis and Palestinians as Prime Minister Benjamin Netanyahu agreed to install more security cameras at the flashpoint Al-Aqsa mosque compound in a bid to defuse tensions.

In a spate of incidents in the occupied West Bank, a 17-year-old Palestinian girl was shot dead while allegedly trying to knife Israeli border police with two Israelis wounded in the attempted stabbings, police said on Sunday. Another Palestinian was seriously wounded when he was shot several times by an Israeli settler while picking olives, according to Palestinian security sources. And on Monday, police reported another knife attack in Hebron, in which the alleged Palestinian attacker was shot dead and the Israeli man was wounded. Knife attacks, shootings and protests have become near daily occurrences since simmering tensions over the status of the Al-Aqsa mosque compound in Jerusalem boiled over in early October, leaving dozens dead.

The focal point of the latest unrest is the powder-keg Al-Aqsa mosque compound in Jerusalem, which is sacred to both Muslims and Jews, and Netanyahu on Saturday agreed on new measures to allay Palestinian fears that Israel plans to change rules governing the site. Netanyahu agreed 24-hour surveillance cameras could be installed, adding that these were in Israel's interest. U.S. Secretary of State John Kerry also said Israel had embraced "an excellent suggestion," adding that the cameras would be a "game changer in discouraging anybody from disturbing the sanctity of the holy site."

However the Palestinian foreign minister has reacted warily to an agreement by Israel and Jorden to the new measure. "This is a new trap," Foreign Minister Riyad al-Maliki said on Voice of Palestine radio, accusing Israel of planning to use such footage to arrest Muslim worshippers it believes are "inciting" against it. Palestinian Governor of Jerusalem Adnan al-Husseini also said the cameras were only of use to Israel. "They want to observe whoever comes in and out," he said. "There will not be calm without political prospects to definitively end the occupation," said Nabil Shaath, an official from Palestinian president Mahmud Abbas' West Bank-based Fatah.

Although Israeli security forces control the Al-Aqsa mosque compound and Jordan is its religious custodian, it was unclear how new cameras could be installed without stoking more violence at the flashpoint site if Palestinians objected to them.

The most recent attempt to resolve the Israeli-Palestinian conflict collapsed in April 2014 amid bitter recriminations on both sides. Israel's Defense Minister Moshe Yaalon said that currently cameras film the outside plaza of the compound, but not the interiors of its shrines. Jordanian Foreign Minister Nasser Judeh said Jordanian and Israeli technical teams were likely to meet soon "to discuss the implementation of this idea alongside other measures to maintain and enhance public order and calm." Ties between Israel and Jordan have often been strained by events at the site in east Jerusalem, a majority Palestinian area that was seized by Israel during the 1967 Six-Day War and later annexed in a move never internationally recognized. Under terms of a 1994 peace treaty, Jordan is recognized as custodian of the Al-Aqsa compound but Israel controls access.

Israeli newspaper Yedioth Ahronoth reported on Monday the new measures proposed by Netanyahu also targeted some 80,000 Palestinians living in the Shufat refugee camp and the Kafr Aqab neighborhood. According to the paper, tens of thousands of Palestinian residents of Jerusalem could lose their right to enter the city. Both areas, Shufat refugee camp and the Kafr Aqab, lie beyond the Israeli-built separation barrier that runs along the de facto border between the Israeli-occupied West Bank and Israel. Nevertheless, both are considered part of East Jerusalem, while their inhabitants are considered Jerusalem residents who therefore enjoy access to the city.

This month, Israel introduced a number of restrictive security measures - including stepped-up police searches, checkpoints and roadblocks - throughout East Jerusalem. The fresh measures come amid an ongoing wave of violence that has left at least 58 Palestinians and 10 Israelis dead.

The Al-Aqsa mosque compound is considered holy by both Muslims and Jews, who call it Temple Mount. Israel occupied east Jerusalem, where Al-Aqsa is located, in the Six-Day War of 1967 and later annexed it in a move never recognized by the international community.
Last Update: Oct 27, 2015 3:41 am
RELATED TOPICS