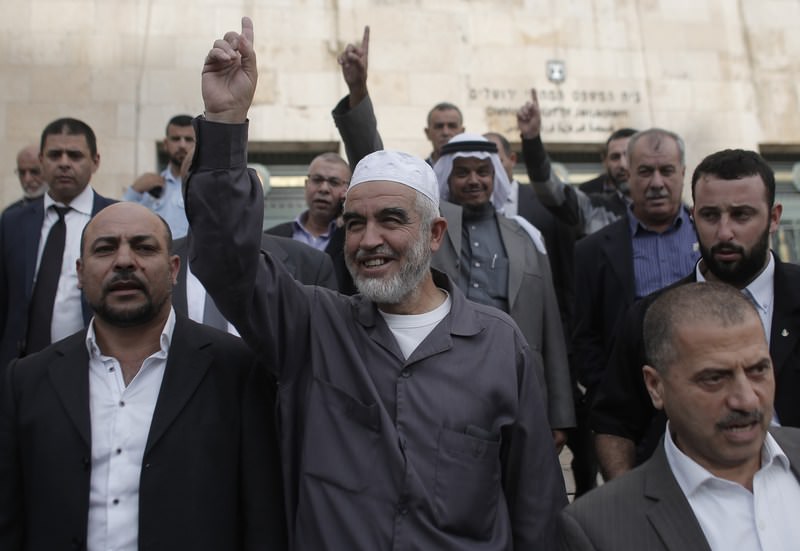 by Anadolu Agency Oct 27, 2015 12:00 am
Israel's Jerusalem District Court on Tuesday rejected an appeal lodged by Sheikh Raed Salah, the leader of the Islamic Movement in Israel's northern branch, and sentenced him to 11 months jail for "inciting violence".

According to the court, the implementation of the ruling will begin on Nov. 15.

Two weeks ago, Israeli prosecutors demanded that Salah be jailed for between 18 and 40 months for allegedly inciting violence in a 2007 sermon he delivered in Israeli-occupied East Jerusalem's Wadi al-Joz neighborhood.

"The holy city of Jerusalem is under Israeli occupation; we will not abandon the Al-Aqsa Mosque," Israel's Wallah news website quoted Salah as saying after the court decision.

"With our souls and blood, we will redeem it [the Al-Aqsa Mosque]," he added.

Sheikh Salah went on to assert that what he described as a plan by the U.S Secretary of State John Kerry to give legitimacy to the decades-old Zionist occupation would not succeed.

"The Israeli court says we have no right to defend our holy mosque; we say we will continue to protect it -- and we will win," Salah asserted.

Deputy head of the Islamic Movement in Israel, Sheikh Kamal al-Khatib, for his part, said the trial was a political one intended to pressure the Islamic movement and stop it from playing its role of safeguarding the Al-Aqsa Mosque.

"We will not retreat. We will continue defending Jerusalem and our holy places by all available means," al-Khatib told Anadolu Agency.

"The Netanyahu government aims to outlaw the Islamic movement and exploit the situation to carry out its plans," he added.

Al-Khatib went to assert that the movement would not abandon its role defending the Palestinian people and their holy places.

He also called on the Islamic and Arab world to take part in protecting the Al-Aqsa Mosque from Israeli violations.

For Muslims, Al-Aqsa represents the world's third holiest site. Jews, for their part, refer to the area as the "Temple Mount", claiming it was the site of two Jewish temples built in ancient times.

Israel occupied East Jerusalem -- in which the Al-Aqsa is located -- during the 1967 Middle East War. It later annexed the holy city in 1980, claiming it as the capital of the Jewish state in a move never recognized by the international community.

In late 2000, a visit to the flashpoint site by controversial Israeli leader Ariel Sharon sparked what later became known as the "Second Intifada" -- a popular uprising against the Israeli occupation in which thousands of Palestinians were killed.
Last Update: Oct 27, 2015 7:16 pm
RELATED TOPICS