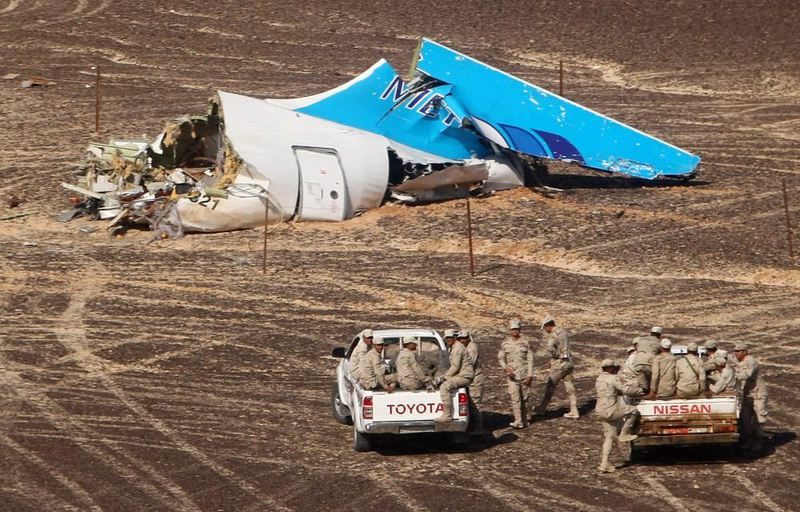 by Daily Sabah with Wires
Nov 03, 2015 12:00 am
Only an external impact could have caused a Russian plane to dive into the Egyptian desert, killing all 224 people on board, the airline said Monday, adding to a series of incomplete and confusing statements from investigators that left unclear why the plane broke up in mid-flight. "We rule out a technical fault of the plane or a pilot error," said Alexander Smirnov, deputy general director of Metrojet. "The only possible explanation could be an external impact on the airplane." But when pressed for more details about the type of impact and what could have caused it, Smirnov insisted that he was not at liberty to discuss details because the investigation was ongoing. He also did not explain whether he meant something had hit the plane or that some external factor caused the crash. Viktor Yung, another deputy director general of Metrojet, said the crew did not send a distress call and they did not contact traffic controllers before the crash. An Egyptian official had previously said the pilot radioed that the plane was experiencing technical problems and he intended to try to land at the nearest airport.

The Airbus A321-200 crashed from 31,000 feet in the Sinai Peninsula just 23 minutes after taking off from the Egyptian Red Sea resort of Sharm el-Sheikh en route to St. Petersburg. Smirnov said the plane dropped 300 kph (186 mph) in speed and 1.5 kilometers (about 5,000 feet) in altitude one minute before it crashed. Alexander Neradko, head of Russia's federal aviation agency, told reporters on Sunday that the large area over which plane debris fragments were found indicates the jet disintegrated while flying at high altitude. He would not comment on any possible reason for the crash, citing the ongoing investigation. When planes do break up in midair, experts say it's usually because of one of three factors: a catastrophic weather event, a midair collision or an external threat, such as a bomb or a missile. With no indication that those events played a role in the crash, Todd Curtis, a former safety engineer with Boeing, said investigators will be looking at more unusual events, such as an on-board fire or corrosion that caused a structural failure.

A local affiliate of ISIS has claimed it brought down the aircraft, which crashed in the northern Sinai, where the Egyptian military and security forces have battled militants for years. Russian officials have dismissed that claim as not credible. British military analyst Paul Beaver said he thought the crash was most likely caused by a bomb on board, saying he was certain ISIS does not possess a missile system such as the Russian BUK capable of hitting the plane.

President Vladimir Putin said on Monday the crash of a Russian Airbus A321 in Egypt's Sinai Peninsula was a great tragedy and he called on investigators to build an "objective picture" of what happened. Russian Prime Minister Dmitry Medvedev called on Monday for a thorough investigation into the plane crash"The key task is to investigate in detail what caused the tragedy," Medvedev said in remarks showed by Rossiya-24 state television.

A Russian cargo plane on Monday brought the first bodies of Russian victims. The Russian government plane brought 140 passengers to St. Petersburg's Pulkovo airport, touching down in the early morning dark. Putin declared a nationwide day of mourning on Sunday, and flags flew at half-staff across the country. St. Petersburg, where many of the victims are from, is holding three days of mourning through Tuesday.