Mustard gas used during a battle between ISIS, other groups in Syria, int'l watchdog report says 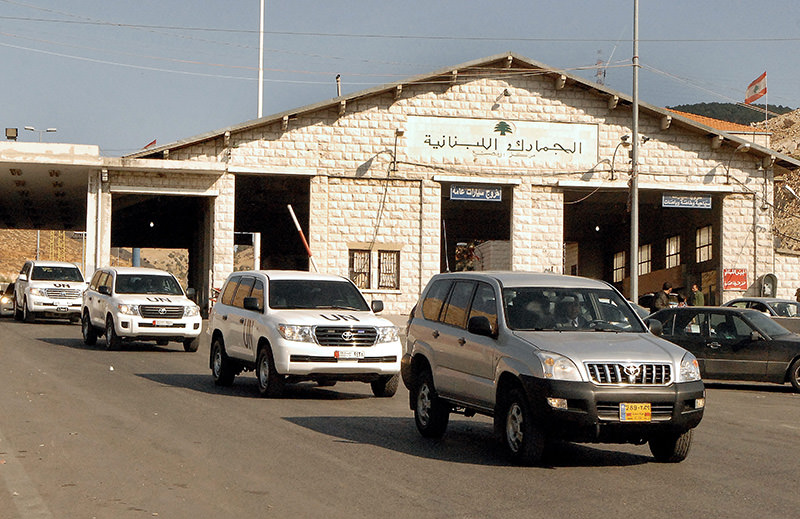 A file photo dated 30 September 2013 shows a convoy of UN vehicles carrying the UN team of inspectors investigating the alleged use of chemical weapons in Syria crossing into Lebanon from Syria (EPA Photo)
by Nov 05, 2015 12:00 am
Chemical weapons experts have determined that mustard gas was used during fighting in Syria in August, according to a report by an international watchdog seen by Reuters.

The chemical - which causes severe delayed burns to the eyes, skin and lungs and is banned under international law - was used during a battle between ISIS insurgents and another rebel group, diplomatic sources said.

The confidential Oct. 29 report by the Organisation for the Prohibition of Chemical Weapons (OPCW), a summary of which was shown to Reuters, concluded "with the utmost confidence that at least two people were exposed to sulphur mustard" in the town of Marea, north of Aleppo, on Aug. 21.

"It is very likely that the effects of sulphur mustard resulted in the death of a baby," it said.

The report provides the first official confirmation of use of sulphur mustard, commonly known as mustard gas, in Syria since it agreed to destroy its chemical weapons stockpile, which included sulphur mustard.

Also "it raises the major question of where the sulphur mustard came from", one source said. "Either they (ISIS) gained the ability to make it themselves, or it may have come from an undeclared stockpile overtaken by ISIS. Both are worrying options."

The finding, which will be formally presented to U.N. Secretary General Ban Ki-moon later this month, adds to a growing body of evidence that ISIS has obtained, and is using, chemical weapons in both Iraq and Syria.

Kurdish authorities said earlier this month that ISIS terrorists fired mortar rounds containing mustard agent at Kurdish peshmerga fighters in northern Iraq during clashes in August. They said blood samples taken from around 35 fighters who were exposed in the attack southwest of the regional capital of Irbil showed "signatures" of mustard gas.

A team of OPCW experts has been sent to Iraq to confirm the findings and is expected to obtain its own samples later this month, one diplomat said.

A special session has been called by the OPCW's 41-member Executive Council to discuss the Syrian findings and it will be held in The Hague on Nov. 23, sources at the OPCW told Reuters.

Sulphur mustard is a so-called Schedule 1 chemical agent, which means it has few uses outside warfare.

A second report by the OPCW fact-finding mission to Syria said the team had so far been unable to substantiate claims from the Syrian government that its forces had been targeted by insurgents using chemical weapons.

The mission "cannot confidently determine whether or not a chemical was used as a weapon" by militants in the Jober area on Aug. 29, 2014, it said.

Syria agreed in September 2013 to destroy its entire chemical weapons programme under a deal negotiated with the United States and Russia after hundreds of people were killed in a sarin gas attack in the outskirts of the capital, Damascus.

The last of 1,300 tonnes of chemical weapons declared to the OPCW was handed over in June, 2014, but several Western governments have expressed doubt that the government of President Bashar al-Assad declared its entire arsenal.

With Syria's civil war in its fifth year, chlorine has also been used illegally in systematic attacks against civilians, the OPCW found.

A U.N.-OPCW joint investigative mission has been assigned to determine who was behind those attacks.