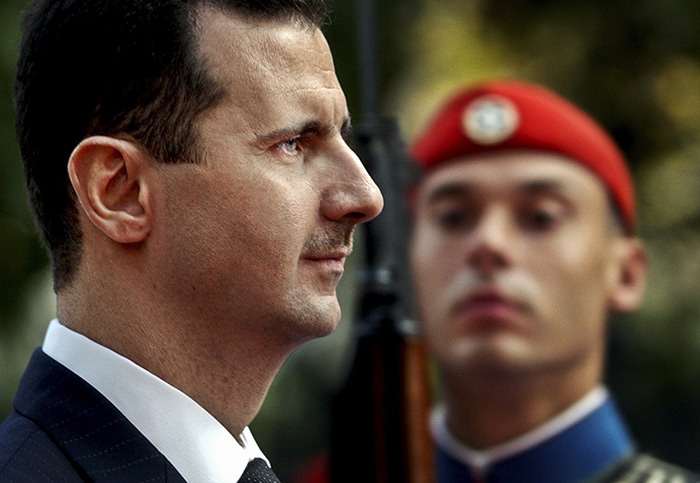 by Mehmet Çelik Nov 23, 2015 12:00 am
The leaders of the moderate Syrian opposition groups convened at a conference in Istanbul on Nov. 21-22 organized by the Syrian Alawite group Upcoming Syria. They called for the removal of Syrian President Bashar al-Assad's regime as soon as possible and stressed that he should not take part in the transitional government.

Majority of minority Alawite community, an offshoot of Shia Islam, remains loyal to the Assad regime; however, there is a good portion of those who stood against the regime since the civil war started in the country.

The participants of the conference included the president of the National Coalition for Syrian Revolutionary and Opposition Forces, Khalid Khoja, the head of Upcoming Syria, Fuad Humeyra, vice chairman of the Syrian Turkmen National Movement Party, Tarık Sulo, Hassan Hashimi from Iran's Al-Ahwaz Arab and the heads of Christian, Kurdish and other moderate groups.

Speaking to Daily Sabah, Upcoming Syria spokesman Oubeb Khalil said the conference was organized as an effort to become a voice within the Alawite community that aims to support the unification of moderate Syrian groups for the establishment of a new Syria after the Assad regime is removed.

"We are here today to unify the efforts of dissidents from the Alawite sects and try to challenge reference to the Assad family," Khalil said. "Bashar al-Assad has always presented himself as the protector while destroying the country, killing everyone and sending Alawite kids to be killed every day, sacrificing them to stay in power. He usually presents himself as the savior and the protector of the Alawite sects, but we are challenging the narrative. We are putting together efforts that come from the Alawite sects. We are saying we do not represent all Alawites, but we are the voice that could address the concerns and the interests of the Alawite community while at the same time communicate with all Syrians. We are all Syrian before anything and the sub-identity does not contradict the main identity. We can all be from different sects, but we should all aspire for the same goal of having a free, democratic, civil and secular state where there is a rule of law, accountability and justice, while at the same time realizing the fears and the interests of the Alawite community." 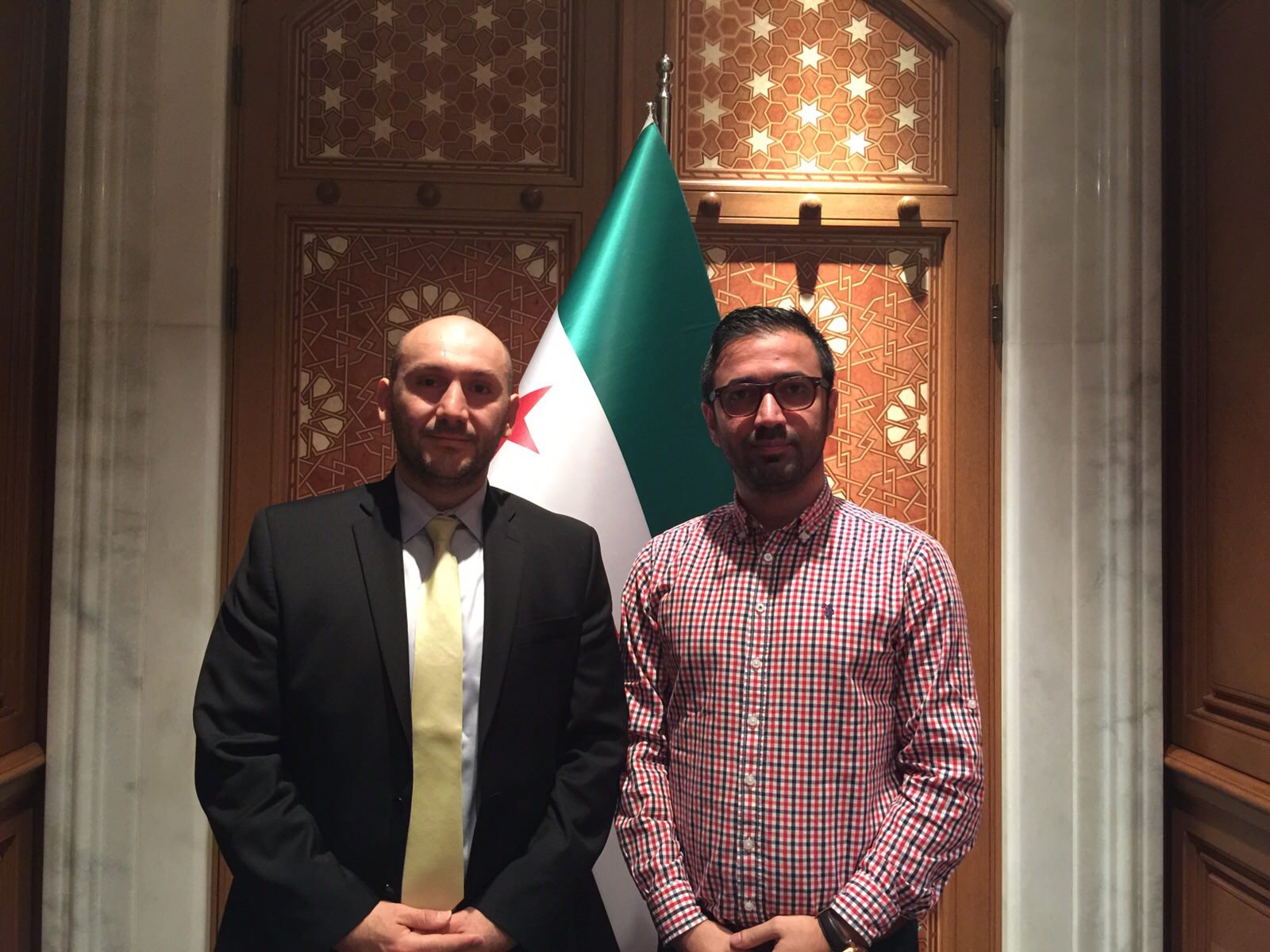 Regarding the Russian and Iranian intervention in the conflict to support the Assad regime, Khalil said: "We believe the Russian airstrikes are an aggression. The Russian airstrikes, 95 percent of them, are against very moderate FSA [Free Syrian Army] rebels. More than 50 percent of the people they killed have been civilians, 16 percent being women, and they have killed children and attacked medical facilities. These are not our claims; they are documented by international, third-party legal and human rights organizations. We also want to tell the international community that we are against all foreign forces that exist in Syria, whether these are the violent extremists, such as ISIS [DAESH], or whether they are the revolutionary guard, the Iranian forces or the [Shiite] militia. We don't want anyone to continue to use Syria as the land where a sectarian fight could happen for political gain or political reasons."

Khalil said Assad cannot be part of a transitional government in Syria, as Russia and Iran presses, since he is the reason behind the instability that has led to the civil war in Syria.

"Assad and transition are two contradicting words; they cannot be together. Assad cannot be part of any solution in Syria. Assad is disqualified by the amount of crimes he has committed. The right place for Assad is prison. There cannot be any transition in Syria, whether imposed or persuaded, if Assad plays any role. He has always played a destructive role and he cannot play a role in the transition. We know that Russian and Iranians are pushing for this, but this cannot be a solution; it will be a recipe for disaster. There can be no stability or peace in Syria if Assad is still in his place," Khalil said.

Khalil stressed the importance of establishing a safe zone in northern Syria to protect civilians from the regime's attacks. He added that a safe zone is important for the refugee situation as well as for protecting the lives of Syrians, whether in the north or the south, from Russian or regime airstrikes.

"A safe zone is long overdue; we are advocating a no-fly zone all over Syria. The main killing force for the regime has been the air force in general. They have been attacking us with barrel bombs via the Syrian or Russian air forces. We believe a safe zone, whether in the south or the north, is long due, as it will protect civilians. It will greatly address the refugee issue that has become a hot debate in Europe. So, it is something we should see all over Syria," he said.

Khoja also commented on the situation in Syria, stressing that the diversity among the groups within Syria should be a unifying force against those with aims to perpetuate a sectarian war in Syria or terrorism rather than a reason for division. "Our communities in the Middle East are pluralistic by nature, and very colorful like mosaics," Khoja said. "This enriches the community and is not a weakness, except when it comes with terrorism and extremism. The struggle over the last years scattered our mosaics and spoiled the scene. We need to work to unite the components of the Syrian community and fight terrorism to build a new Syria with a democratic, pluralistic society, free of terrorism and extremism, which guarantees the human rights of its people and is ready to build a new constitution. At the beginning of the revolution, the Syrian regime had a clear goal: To keep Assad in power. The regime's fighters used the slogans 'Assad or we burn the country' and 'Assad or none' to keep this family in control of peoples' destiny's. They recently started using government employees in the war in order to achieve their goals and to fight until they lose every last soldier they have. That was very clearly the goal. Our goal is different. Our goal is to collaborate together," he added.

"There is an international agreement to find a solution built on the Geneva agreements, but the situation got more complicated with the Russian occupation, which comes to complete the Iranian occupation. We are facing a complicated political situation and a hard situation on the ground," Khoja said. "I would like to call, as I called before, on al-Nusra [Front] in Syria to cut ties with al-Qaida because the history of al-Qaida in the region is a black, bloody history, no better than DAESH. So, I say again that if any groups like al-Nusra [Front] that have relations with Al-Qaida who want to take part in building a new Syria, they should cut their ties with al-Qaida terrorist group."

He also stressed that the power vacuum and absence of strong political leadership in the Arab community cleared the way for Iran's sectarian project, and added: "Then with the overthrow of Saddam Hussein, the sectarian ideology started to flourish. Previously this ideology was not profitable. Then after the Arab Spring, Iran tried to expand its project, as the two anti-Iranian regimes – the Egyptian and Tunisian regimes – collapsed. Iran interfered with its full power and capacity to stop the Syrian revolution. The Iranian project is not backed by the Iranian people. Rather, the Iranians wish that their regime would collapse due to its failure in the region.

Assad ruined the country for his own interests

After the two-day conference, Upcoming Syria released a statement that read: "The Assad regime and its allies worked for over 50 years on strengthening and manipulating sectarian, tribal and family royalties in Syrian society in order to pursue its own interests and maintain its survival. This came at the expense of a declining awareness of national identity, which created a sense of persecution. Upcoming Syria emphasized that Assad and his authority are responsible for the situation that led the country to ruins, for the death[s], and for the misuse of weapons and armies. Assad invited the intervention of foreign forces in every part of the country. And Assad is the source of violence through his insistence on security and military solutions. It is Assad's deliberate sectarian crimes that led to escalating sectarian tensions. Assad got us to where we are now."