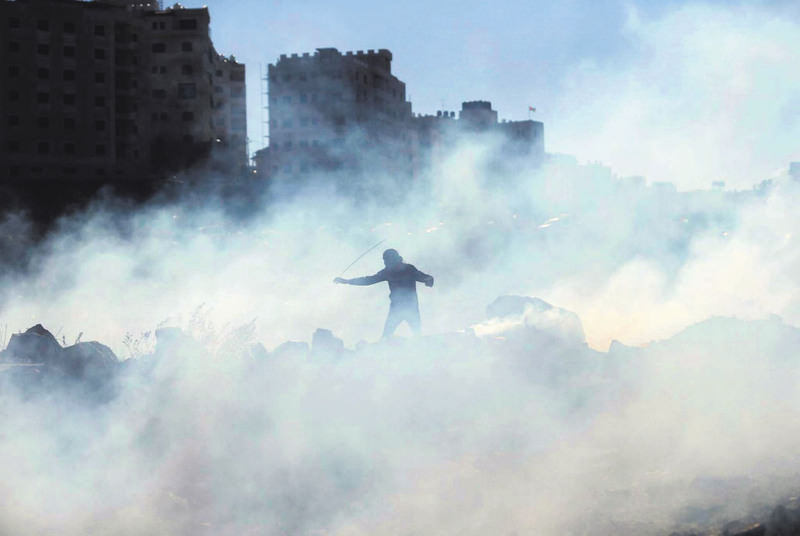 A Palestinian protester uses a sling as he prepares to return a tear gas canister fired by Israeli troops.
by Daily Sabah with AP Nov 25, 2015 12:00 am

U.S. Secretary of State John Kerry paid an official visit to Israel to calm the situation with Palestine. However, violence flared ahead of his visit and Israel made no sign for softening its policies on Palestinians

A Palestinian motorist rammed his vehicle into a group of Israeli soldiers at a West Bank checkpoint on Tuesday, wounding three, Israel's military said, as U.S. Secretary of State John Kerry visited for the first time in over a year, hoping to calm two months of deadly violence. Kerry touched down amid a new rash of deadly attacks that have dampened any lingering hopes of renewed peace negotiations between Israel and the Palestinians during the Obama administration's final year. Ahead of his trip, Kerry conceded he was coming without the ambitious agenda of past visits and was primarily focused on stemming the violence.

"There can be no peace when we have an onslaught of terror, not here, not anywhere else," Israeli Prime Minister Benjamin Netanyahu said as he welcomed the chief American diplomat. With Netanyahu nodding, Kerry said Israel had a right and obligation to defend itself and that "no people anywhere should live with daily violence, with attacks in the streets with knives, with scissors, with cars." At the same time, he said he would speak with the Israeli leader about how "to push back against terrorism, to push back against senseless violence, and to find a way forward to restore calm and begin to provide opportunities."The current spate of violence erupted in mid-September over tensions surrounding a sensitive Jerusalem holy site and quickly spread across Israel and into the West Bank and Gaza Strip. Nineteen Israelis have been killed, mostly in stabbings. Israeli fire has killed 89 Palestinians. Israel says 57 of these were attackers, while the rest died in clashes with security forces. The past week has been the deadliest thus far. A Palestinian fatally stabbed an Israeli soldier at a West Bank gas station Monday before being killed along with two other Palestinian attackers. Five people were killed in stabbing and shooting attacks on Nov. 19, including Ezra Schwartz, an 18-year-old from Kerry's home state of Massachusetts. Amid so much violence, Kerry said Monday he would be traveling to Israel and the Palestinian territories without any "highfalutin, grandiose, hidden agenda." Instead, he was seeking steps "that could calm things down a little bit so people aren't living in absolute, daily terror." But the attacks renewed as quickly as Kerry landed.

Kerry has visited Israel and the Palestinian territories only once since the collapse in April 2014 of a nine-month peace process he led. He traveled back three months later during a war between Israel and Hamas militants in Gaza. In recent months, Kerry and other U.S. officials have suggested a renewed peace push might be possible. Presidents George W. Bush and Bill Clinton made unsuccessful attempts at brokering a two-state solution during their final months in office. But the rising death toll seems, for now, to have created an environment that makes a similar commitment by President Barack Obama unlikely.

The relations between Israel and the U.S. were in an unprecedented era as it has become visible that the two countries are disappointed with each other's some policies. The rising tensions between the two historically allies' leaders has resulted from a serious of diplomatic confrontations which has contributed to the souring of the relations. In addition, it is no secret that Netanyahu and Obama have not been the closest friends, as one would expect from the leaders of the states that are such strong allies. The U.S. administration continuously voices concerns over the construction of new settlements by the Israeli government in the occupied territories and invites Israel to engage in a two-state solution to the conflict between Israel and Palestine, though this seems unlikely given the recent formation of, perhaps, one of the most right-wing coalition governments in Israel's history.

Israel has not softened its policies towards Palestinians for which it is blamed to escalate tensions. Despite pressure from the U.N., U.S., EU and the international community for its historic crimes and daily inhumane treatment of Palestinians, including imposing a blockade on Gaza, building illegal settlements on the Palestinian territories and periodically attacking and killing civilians, the politics of denial have become an attribute of Israeli politics. Most recently in July 2014, Israel launched a fully-fledged attack on Gaza, killing more than 2,500 civilians and destroying many structures in Gaza. In addition, Israel continues to build illegal settlements in the occupied territories, most recently building 450 settlements authorized in late 2014 and more than 1,000 in 2015.
RELATED TOPICS