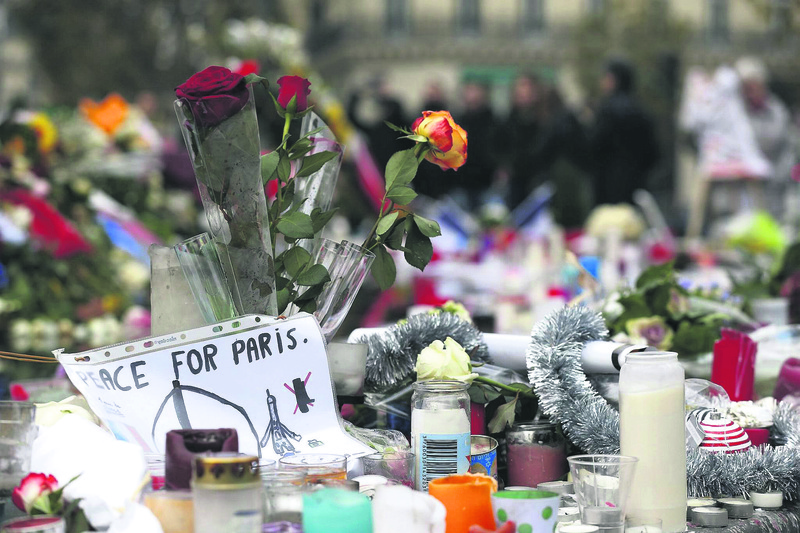 People leave French national flags, candles and flowers at a makeshift memorial in Paris for the 130 people who were killed in a terror attack, claimed by DAESH.
by Daily Sabah with Wires Dec 02, 2015 12:00 am

In an interview with Czech TV, Syria's Bashar Assad who is described as a ‘butcher' by French PM Manuel Valls, accused France of supporting terrorism even though the country was hit by deadly terror attacks only three weeks ago

Syria's Bashar Assad accused France of 'supporting terrorism' and said he saw Prague as a possible venue for signing any future peace deal to end his country's four-year civil war, in comments broadcast Monday on Czech TV. In an interview Assad was asked whether he could see a peace deal being signed in Prague, as Czech President Milos Zeman had suggested in September. "Naturally, if you ask Syrians they will tell you they don't want a peace conference in France, for example, because France supports terrorism and war, not peace," he said on the CT public station. "And as you mention Prague, it would be generally accepted because of the balanced position of your country." As the last diplomatic outpost of the West in Syria, the Czech embassy has become a hub for confidential U.S. and EU communication with the Damascus regime amid moves aimed at ending the four-year conflict.

Although Assad, referring to France's support for the moderate rebels and demand for the removal of him, blames France for supporting terror, the country was hit by terror attacks two weeks ago that killed 130. France has been hit by one of its worst attacks since World War II as DAESH has killed at least 129 people and wounded over 350, 99 of them seriously in Friday's attacks on a stadium, a concert hall and cafes in Paris.

Despite France's adamant position against Assad, French President Francois Hollande has established close relations with Russia which staunchly supports Assad. Despite Russia's aggressive stance against the West, France seeks to tighten its relations with Moscow. The presidents of France and Russia agreed Thursday to tighten cooperation in the fight against DAESH, but they remained at odds over their approach toward Syria's Bashar Assad. Hollande and Putin agreed on increasing intelligence sharing, intensifying their airstrikes against DAESH in Syria and cooperating on selecting targets. "We agreed on a very important issue: To strike the terrorists only, DAESH and the militant groups only, and not to strike the forces and the groups that are fighting against the terrorists," Hollande said after the meeting. "And we are going to exchange some information about that: what can be struck, and what must not be struck." But the two countries remain at odds in their approach toward Assad, with Hollande saying the Syrian head of state "does not have his place in Syria's future," and Putin stressing that "the Syrian president's fate should be entirely in the hands of the Syrian people." Putin described Assad's army as a "natural ally" in the fight against DAESH an essential force capable of battling the extremist group on the ground. Despite the differing approach French Foreign Minister Laurent Fabius said on Friday troops loyal to Assad could be used to fight DAESH, but only in the framework of a political transition without Assad. "Troops on the ground cannot be ours, but (there can be) Syrian soldiers from the Free Syrian Army, Sunni Arab states, and why not regime troops," Laurent Fabius told RTL radio without specifying whether he meant immediately or in the long-term. Clarifying Fabius' comments, an official in his entourage said the minister was reiterating France's long-standing position that there could be no cooperation with Syrian government forces to battle DAESH until a unity government was in place. "It could only happen in the framework of a political transition and Fabius stresses that this transition is urgent and indispensable," the official said.

Previously French Prime Minister Manuel Valls called Assad butcher as the airstrikes and troops, loyal to the regime, killed hundreds of thousands of civilian Syrians since the war broke out in 2011.
RELATED TOPICS