16 mass graves discovered in Iraq’s Sinjar since its recapture from Daesh: UN 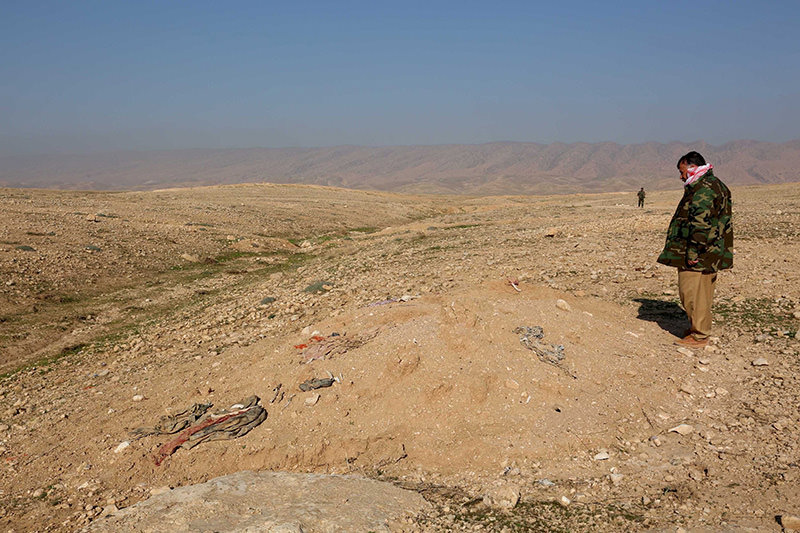 A member of the peshmerga forces inspects bones, suspected to belong to members of Iraq's Yazidi community, are seen at mass grave in Sinjar, Nov 30, 2015 (Reuters photo)
by Dec 04, 2015 12:00 am
Sixteen mass graves have been discovered in Sinjar in northern Iraq since it was recaptured from Daesh, the UN said Friday, which also detailed "gross human rights violations" by the extremist group.

The UN human rights group said civilians had been kidnapped, burned and beheaded in Daesh-controlled areas.

"We have received reports that some 16 mass graves containing the bodies of individuals murdered by ISIL have been discovered in Sinjar," said Cecile Pouilly, spokeswoman for the UN human rights agency, using an alternative acronym for Daesh.

It is not clear how many bodies were in the graves and where exactly in Sinjar they were located, she told reporters in Geneva.

Daesh overran Sinjar in August 2014 and carried out a brutal campaign of massacres, enslavement and rape, targeting members of the Yazidi minority, which made up most of its inhabitants.

The United Nations has described the attack on the Yazidis, whose faith Daesh considers heretical, as a possible genocide.

Forces from Iraq's autonomous Kurdish region, backed by air support from a US-led coalition, recaptured Sinjar from Daesh in a major operation on November 13.

Pouilly meanwhile warned that many of the Sunni Arab communities in parts of Iraq reclaimed from Daesh were suffering increasing human rights abuses.

"Sunni Arab communities have faced increasing discrimination, harassment and violence from other ethnic and religious groups who accuse them of supporting ISIL," she said.

"Reports indicate that Iraqi security forces, Kurdish security forces and their respective affiliated militias have been responsible for looting and destruction of property belonging to the Sunni Arab communities, forced evictions, abductions, illegal detention and, in some cases, extra-judicial killings," she warned.

Pouilly described the attacks as "widespread" and told AFP they were particularly prevalent in Anbar, Diyala, Kirkuk, Salah al-Din and in the Kurdistan region.

"This has been going on for months, little by little as territories have been liberated from IS," she said.

She voiced particular concern for some 1,300 Sunni Iraqis stuck to the east of Sinjar in a "no-man's land between Kurdish security forces and ISIL."

"We urge the government of Iraq to investigate all human rights violations and abuses, including those committed against the Arab Sunni communities, to bring the perpetrators to justice and to ensure that victims have access to appropriate remedies," Pouilly said.
Last Update: Dec 04, 2015 3:06 pm
RELATED TOPICS