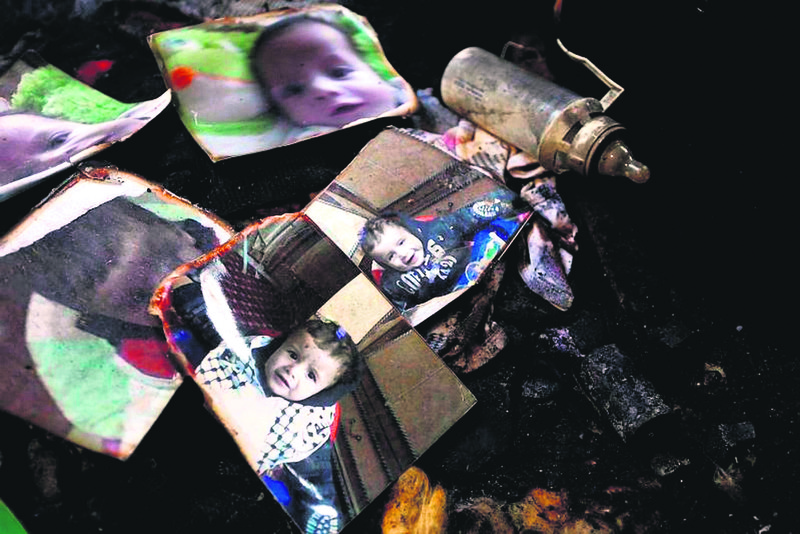 A number of Israelis accused of setting a home on fire and killing a toddler and his father were arrested while Jewish extremists, backed by police, entered Al-Aqsa Mosque compound

Members of a Jewish terror group have been arrested over a July arson attack on a Palestinian home in the Israeli-occupied West Bank that killed a toddler and his parents, Israeli police said on Thursday. A police statement did not say how many suspects were in custody. It said a court order banning disclosure of their names and other details of the case were in effect. Eighteen-month-old Ali Dawabsheh was killed in the July 31 blaze in Duma, a village outside Nablus. His father, Saad Dawabsheh, succumbed on Aug. 9 to injuries suffered in the fire, and the boy's mother, Riham, died in hospital four weeks later. Ali's four-year-old brother remains in hospital. The police statement said "youths belonging to a Jewish terror group" suspected of carrying out attacks on Palestinians were arrested over the past few days, and there were "solid suspicions" linking them to the arson at the Dawabshehs' home.

In a statement on Wednesday, the United Nations special coordinator for the now moribund Middle East peace process expressed concern over what he described as "slow progress" in solving the Duma case. "Amidst the current escalation of violence, it is essential that all firmly and consistently reject terrorism and act decisively to stop hatred and incitement," the U.N. official, Nickolay Mladenov, said. Israeli leaders pledged after the Dawabsheh toddler's death to crack down on violent far-right Jewish groups, and the government decided to start detaining without trial Israeli citizens suspected of political violence against Palestinians.

Meanwhile, scores of Jewish settlers and Israeli soldiers on Thursday forced their way into occupied East Jerusalem's flashpoint Al-Aqsa Mosque compound following calls by Jewish extremist groups to converge on the holy site, a Palestinian official has said. "At least 80 Jewish settlers, backed by Israeli police, forced their way into the mosque compound through the Al-Mugharbeh Gate," mosque director Sheikh Omar al-Qiswani told Anadolu Agency. "The settlers toured the complex, passing by the Al-Qibali and Dome of the Rock mosques, where they attempted to perform Talmudic rituals before leaving through the Al-Silsila and Al-Rahemah gates," he said. Al-Qiswani added that Israeli troops had assaulted a number of Palestinian women near the Hotta Gate and barred them from entering the mosque compound.

Over the past two months, unrest has surged, with almost daily stabbings, car ramming acts and shootings by Palestinians, which have killed 19 Israelis and one U.S. citizen. Israeli forces have killed 97 Palestinians, of whom 58 were identified by Israel as assailants or caught on camera carrying out assaults, while most others were killed in clashes with police or the military. Tensions have also been stoked by disputes over access to a Jerusalem holy site revered by Jews and Muslims and other issues at the heart of the now-frozen Israeli-Palestinian peace process, from failed negotiations to Israeli settlements on occupied land that Palestinians seek for an independent state.
RELATED TOPICS