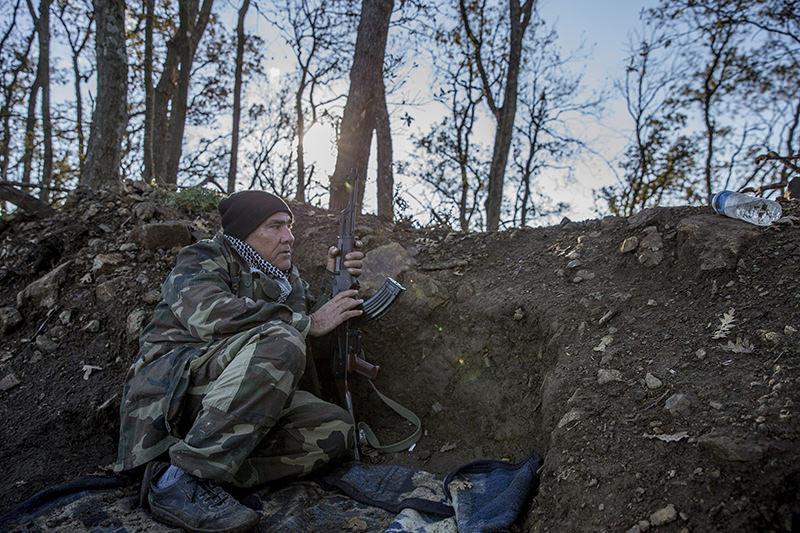 | AA Photo
by Daily Sabah with Agencies Dec 05, 2015 12:00 am
Syrian Turkmen fighters have seized three villages from Daesh terrorists near the Turkish border in clashes that killed 13 from the ethnic minority, a monitor said Saturday.

"This is the first time that Turkmen fighters have led the battle against Daesh in the area, and that comes after they received support from Turkey," said Rami Abdel Rahman, director of the Syrian Observatory for Human Rights monitor.

He did not provide details on the alleged assistance.

The Britain-based group said the 13 fighters killed since Friday were members of the Sultan Murad Brigades, made up of Turkmen fighters, battling Daesh in the northern province of Aleppo.

The clashes were centered on a region to the east of Azaz, a town on the Turkish border, which is home to many of Syria's Turkmen minority, it said.

It added that the Turkmen had captured three border villages.

The Observatory did not have a casualty toll for the terrorists but said one of their vehicles was destroyed in an air strike by the US-led coalition in the Azaz area Friday night.

Daesh controls large stretches of the border area, but Ankara and Washington have sought to ensure the group is cleared from the area between Jarabulus and Azaz.

Turkey sees Syria's Turkmen in Syria as natural allies and reports have frequently surfaced that Ankara wants them to lead the fight against Daesh in areas near the border.

In November, over 1,700 Syrian Turkmens fleeing air strikes carried out by the Assad regime and Russia arrived in southern Turkey to seek refuge.