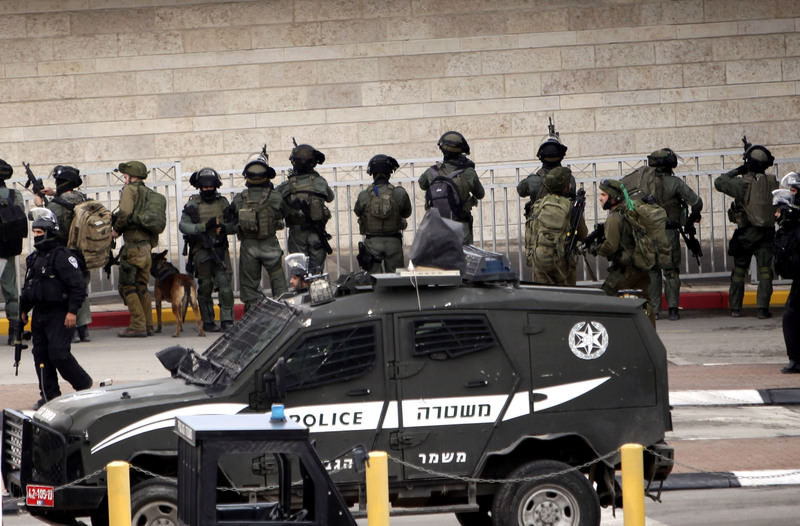 by Anadolu Agency Dec 06, 2015 12:00 am
Israeli Prime Minister Benjamin Netanyahu on Sunday described recent Swedish criticisms of Israeli security measures against alleged Palestinian attackers as "scandalous remarks" following a week of diplomatic rows between the Jewish state and a handful of European countries.

"I condemn the Swedish foreign minister's scandalous remarks," Netanyahu said before a weekly Cabinet meeting. "Apparently she expects Israelis to offer their necks to whoever wants to stab them."

Israeli newspaper Haaretz reported that Wallstrom's office had responded to earlier criticisms by Israeli Foreign Ministry by claiming she had been misquoted.

Wallstrom's press secretary, Erik Wirkensjo, reportedly said that the Swedish FM had not used the term "extrajudicial executions" but had instead commented generally on what she had described as Israel's disproportional reaction to perceived threats.

Many of the 114 Palestinians killed by Israeli security forces since Oct. 1 were shot dead after allegedly stabbing -- or attempting to stab -- Israelis.

Twenty-two Israelis or foreigners have been killed over the same period.

Human rights groups, meanwhile, including Amnesty International, have suggested that Israeli forces have employed a "shoot-to-kill" policy against alleged Palestinian attackers -- even when the latter did not constitute an immediate threat.

The row with Sweden comes amid attempts by Israel to exclude the EU from the Palestine-Israel peace process following an EU decision to label goods produced on Jewish-only West Bank settlements as such.

As a result of the decision, recent meetings between Israeli officials and Austrian and Belgian government ministers have been cancelled.

A scheduled meeting between Austria's vice-chancellor and Israel's science minister was called off last Friday after the Austrian side refused to hold the meeting in East Jerusalem (occupied by Israel in 1967), demanding it be held in West Jerusalem instead.

And last Wednesday, Israeli newspaper Yedioth Ahronoth reported that a planned visit to Israel by Belgian Foreign Minister Didier Reynders had been cancelled after he was told Netanyahu would not meet with him due to the EU's decision to label settlement-made goods.

In his Sunday comments, Netanyahu also warned U.S. Secretary of State John Kerry that the lack of peace talks could potentially lead to the collapse of the Ramallah-based Palestinian Authority (PA) and a "one-state solution" to the perennial conflict.

"I would like to make it clear: Israel will not be a bi-national state," said Netanyahu. "But in order for there to be peace, the other side needs to decide that it also wants peace."

The PA has repeatedly blamed Israel for the lack of peace talks, which were suspended after an attempt to form a unity government between the Palestinian Liberation Organization (PLO) and resistance movement Hamas -- the two Palestinian factions that respectively govern the occupied West Bank and the blockaded Gaza Strip.

"Israel has violated all signed agreements, stopped negotiations, and erased the principles of the two-state solution," PLO Secretary-General Saeb Erekat asserted after Israel said it planned to exclude the EU from the peace process.

"Netanyahu's political program of one state and two systems -- apartheid -- is what we have left on the ground," he said.

Addressing the Israeli PM, Erekat added: "Because of your policies, there is no peace process for anyone to be involved in."
Last Update: Dec 06, 2015 9:01 pm
RELATED TOPICS