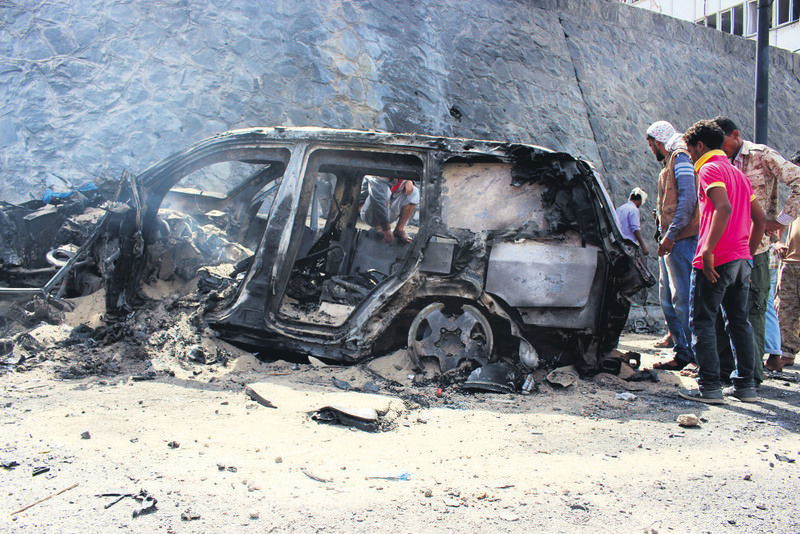 People inspect the scene of a car bomb attack that killed a Yemeni senior official in the southern port city of Aden, Yemen.
by Daily Sabah with AFP Dec 07, 2015 12:00 am

The governor of Yemen's temporary capital Aden, Jaafar Saad, along with six of his bodyguards, was killed in a bombing claimed by DAESH. The group has claimed a series of bombings that have killed 159 people in the country so far this year

A car bomb claimed by DAESH yesterday killed the governor of Yemen's second city Aden, a day after a visit by the U.N.'s envoy to press for long-delayed peace talks.

A statement posted on Twitter by the extremist group said it was behind a blast that hit the convoy of Jaafar Saad in the Tawahi neighborhood of the major port city, killing him and six of his bodyguards. In a statement carried by the official Saba news agency, the head of security in Aden General Mohamed Mussad confirmed Saad's death and said six of his guards were also killed.

Images circulated on social media after the attack showing a wrecked car on fire on a main road in the city.

Saad was only recently appointed governor and was known to be close to President Abedrabbo Mansour Hadi, who returned to Aden last month after several months in exile in Riyadh.

Pro-Hadi forces, aided by a Saudi-led coalition, have battled Iran-backed Shiite Houthi rebels in Yemen since March, after the insurgents overran the capital Sanaa and advanced south, forcing the government to flee to Saudi Arabia. Fighting between the Houthi rebels and loyalist forces has plunged the impoverished nation into chaos, which extremist groups have exploited to make sweeping gains, particularly in southern regions. Tawahi itself has become a known hideout for extremists, including militants belonging to al-Qaida.

DAESH has claimed a string of attacks in Yemen, including the bombing of Hadi's government headquarters in October and multiple suicide attacks on mosques in Sanaa attended by Shiite worshippers that killed scores. Saad's death comes a day after Yemen's U.N. envoy held talks with Hadi in Aden aimed at kick-starting peace talks between the warring sides.

Ismail Ould Cheikh Ahmed met Hadi to seek his agreement to convene negotiations with the rebels in Geneva next week, an official close to the president told AFP. But the mission was "difficult," said the source, accusing the rebels of dragging their feet on implementing U.N. Security Council Resolution 2216, which calls for them to withdraw from occupied territory. And Foreign Minister Abdel Malak al-Mekhlafi told AFP: "The putschists are refusing to lay down their arms or to allow the government to carry out its duties" from Sanaa.

"They have not announced their list of negotiators" for the talks "and are trying to escalate the situation on the ground by bombing residential districts of Taez," a strategic city in southwest Yemen under siege by the rebels and their allies, he said. In a protest sent to the United Nations, Yemen's minister in charge of human rights, Ezzedine al-Isbahi, condemned the "massacres and atrocities" allegedly committed in Taez by the rebels that he said had killed 33 civilians last week, including four children.

The United Nations says that more than 5,700 people have been killed in Yemen, almost half of them civilians, since a Saudi-led air campaign began in March in support of the government. In Aden on Saturday gunmen shot dead the presiding judge of a terrorism court, Mohsen Mohamed Alwan, and four of his bodyguards, a security source said, and police Colonel Al-Khadher Ali Ahmed was gunned down in a separate attack.

Fractious Yemen has been in turmoil since last September, when the Shiite militants overran the capital Sanaa, from which they have sought to extend their influence to other parts of the country. Some Gulf countries accuse Shiite Iran of supporting the Houthi insurgency which has forced Hadi to flee the country. On March 25, Saudi Arabia and its Arab allies began an extensive military campaign targeting Houthi positions across Yemen. Riyadh says its air campaign comes in response to appeals by Yemeni President Abd Rabbuh Mansour Hadi for military intervention against the Houthis.
RELATED TOPICS