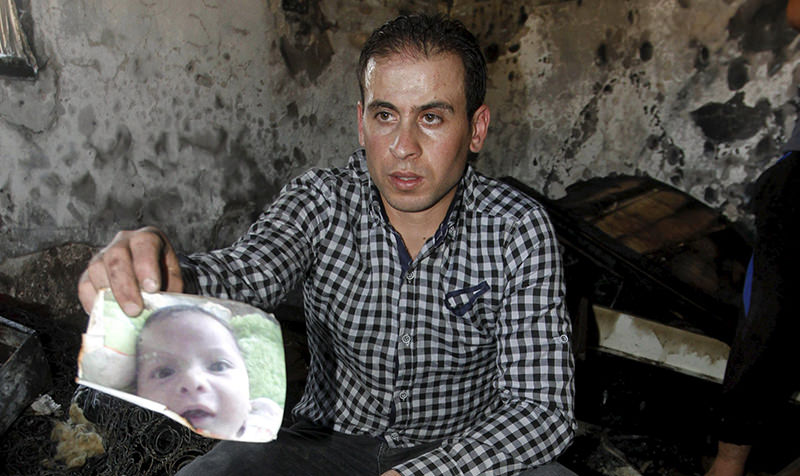 A relative of 18-month-old Palestinian baby Ali Dawabsheh, who was killed after his family's house was set to fire in a suspected attack by Jewish extremists, shows his picture at the burnt house (Reuters Photo)
by Anadolu Agency Dec 07, 2015 12:00 am
Relatives of Ahmed Dawabsheh, a Palestinian boy whose parents and brother were all killed in a July arson attack by suspected Jewish settlers, say they want to meet Turkish President Recep Tayyip Erdoğan to tell him their story.

Ahmed's uncle, Nasser Dawabsheh, told Anadolu Agency that he wanted to meet both Erdoğan and Turkish Prime Minister Ahmet Davutoğlu because "the Turkish people are the friends of the Palestinians".

"We all want to visit Turkey, including Ahmed, to tell our story and meet the Turkish people face to face," he said.

In the weeks that followed, both of his parents succumbed to severe injuries they sustained in the fire.

For the last five months, four-year-old Ahmed has remained in hospital where he has received a series of treatments for burn injuries.

Many observers believe the slow pace of investigations into the attack by the Israeli authorities -- with no arrests made until this week -- indirectly led to the recent wave of violence that has seen 114 Palestinians, along with 22 Israelis or foreigners, killed since Oct. 1.

Nasser Dawabsheh says the family does not only want to meet with Turkish politicians, but also wants to meet with wider Turkish society.

"We want Turkish filmmakers to make a documentary about us -- one that reflects Palestinian aspirations and highlights the suffering of our family and the entire Palestinian people," he said.
Last Update: Dec 07, 2015 2:59 pm
RELATED TOPICS