Video shows aftermath of Russian airstrikes on civilians in Syria 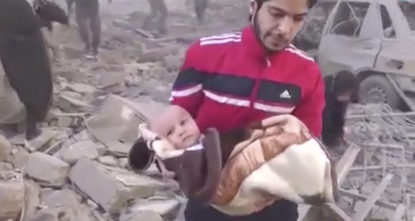 
Videos uploaded to social media purport to show the aftermath of Russian airstrikes in Deir al-Zor, Aleppo and Damascus on Monday (December 7).

The first video appears to show debris and damaged buildings in the eastern Deir al-Zor province. The airstrikes are said to have been undertaken by Russian forces.

Syria's ally Russia is waging an air campaign in support of the Assad regime, and has been striking in Deir al-Zor.

Russia's air raids have hit some Daesh targets, but the members of the US-led coalition say most of them have hit moderate Syrian opposition forces confronting the Assad regime.

The second set of videos purport to show a similar scene in Aleppo, where civilians and members of the Syria Civil Defense group are seen helping to pull wounded men from the rubble and carrying them away. The men have been injured in what are said to be Russian airstrikes.

Forces loyal to the Syrian dictator Bashar al-Assad have been fighting a civil war with various opposition groups across the war-torn country.

The United States, Britain, France and Russia, amongst others, have all conducted airstrikes in the country in response to the threat posed by Daesh terrorists.

The more than four-year-old war shows little sign of slowing across the rest of the country as heavy fighting continues and all the world's major powers except China are all now militarily involved.
Last Update: Dec 09, 2015 1:08 am
RELATED TOPICS