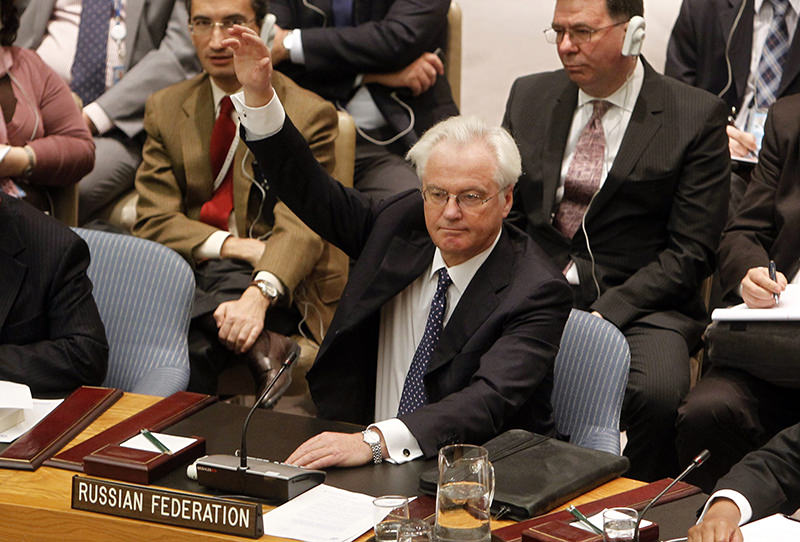 Russian representative Vitaly Churkin vetoes a draft resolution backing an Arab League call for Syrian President Bashar Assad to step down during a meeting of the United Nations Security Council at United Nations (AP Photo)
by Anadolu Agency Dec 09, 2015 12:00 am
Russia's ambassador to the UN said Tuesday that Iraq sent a letter to the Security Council protesting the presence of Turkish troops in the north of the country, but Iraq's UN envoy said no letter as such had been sent.

Churkin's Iraqi counterpart, Mohamed Ali Alhakim, denied that his country had sent a letter to the 15-member council.

"We are working on this bilaterally between Baghdad and Ankara, and when we need, we have letters available to the Security Council, but they have not been issued by Baghdad yet," he said, adding that the letter Churkin referred to might be a letter sent by Iraq on June 25, 2014.

"We have not yet escalated it to the Security Council," he said.

"For us what is helpful is the bilateral discussion going on right now between Baghdad and Ankara, and it is going extremely well," he added.

The posting of Turkish military trainers to Bashiqa, near Mosul, on Friday has caused a diplomatic spat between Iraq and Turkey, with Baghdad insisting they be withdrawn while the Turkish government has said the troops are merely part of a routine rotation as part of a training program for Kurdish peshmerga fighters.

The program has provided training for more than 2,500 peshmerga fighters, including officers, with the ultimate aim of fighting Daesh, according to the Turkish military.

Tuesday's closed-door Security Council consultations were called by Russia in response to the reported tensions.

Churkin also said he was "disappointed" that the council did not agree to his proposal to deliver a press statement on the issue following the meeting.

"I suggested that the president of the Security Council could read to you very simple press elements informally, not a document, very simple press elements basically reaffirming the need to respect the international law and the UN charter, reaffirming the sovereignty and the territorial integrity of Iraq," he said, blaming "inconsistency" and "lack of principle" by some Western countries on the rejection of the press statement.

Turkey's Ambassador to the UN, Halit Çevik, told reporters that Turkey respects the territorial integrity and sovereignty of Iraq.

"As expected in any political problem, which is normal between neighbors, the normal route of approaching these problems, which is bilateral talks, is in the making," he said, adding that Turkish officials have always been in touch with their Iraqi counterparts to settle the issue.
Last Update: Dec 09, 2015 9:11 am
RELATED TOPICS