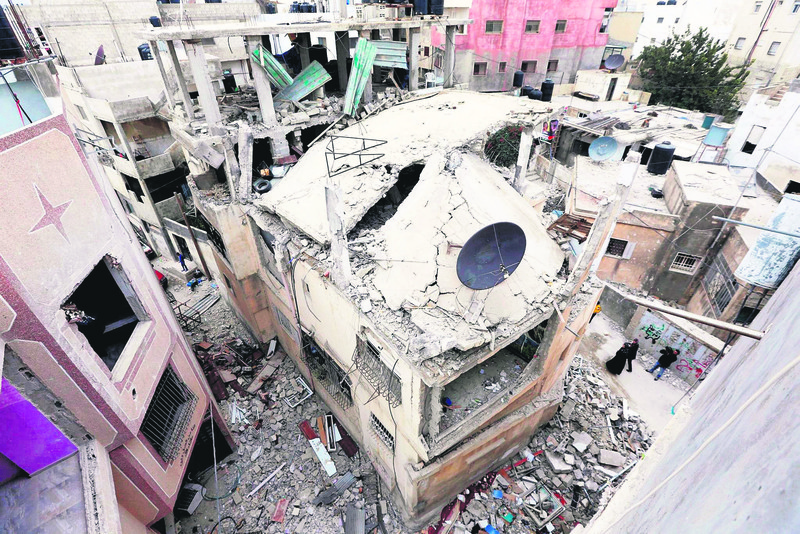 A home, belonging to an alleged Palestinian assailant in in the Qalandia refugee camp, near the West Bank city of Ramallah was demolished by Israeli troops during a raid on the camp.
by Compiled from Wire Services Dec 12, 2015 12:00 am

In a recently published report, it was revealed that demolishment of homes, belonging to alleged Palestinian assailants who are generally killed immediately is increasing tensions in the West Bank. The report also said Israel does not let Palestinians to build new homes despite increasing population

Demolishing Palestinian homes is one of Israel's "most immoral policies", the Palestinian Liberation Organization (PLO) said this week. The PLO said 31 Palestinian homes have been demolished since Sep. 13 when restrictions on Muslims entering Al-Aqsa Mosque sparked a period of heightened tension. The demolitions followed the Israeli government's decision to expand its policy of punitively demolishing the family homes of Palestinians accused of attacking Israelis; though some of the homes were also destroyed for not having building permits. "Demolishing homes is one of the most immoral policies conducted by the Israeli occupation. Forcible displacement of Palestinians is part of the ongoing Nakba aimed at displacing our people and replacing them with foreign settlers," said PLO Secretary-General Saeb Erekat. "The home demolitions in Jerusalem have reached such an intolerable degree that Palestinians are virtually prevented from building on their own land." The PLO statement also said that the demolitions contravened international law and were a form of collective punishment.

It also highlighted the case of the Al Hadiyyah Bedouin community in the Jordan Valley, who Israeli human rights group B'Tselem last week said were being "harassed" by Israeli authorities. B'Tselem said Israeli authorities have destroyed or confiscated several tents belonging to the Bedouin families and on Nov. 25 destroyed a dirt road leading to their tents, limiting access to and from the community. The group said Israel's treatment of the community was an attempt to expel Palestinians from the land that contravened international law, as it "constitutes the forcible transfer of protected persons inside the occupied territory, whether directly through home demolitions, or indirectly, by creating unlivable conditions."

On Monday, Israeli newspaper Haaretz reported that despite almost half of Jerusalem's population being Palestinian, only 7 percent of building permits issued in the city went to Palestinian neighborhoods. A U.N. report in June said overcrowding because of a lack of housing for Palestinians was exacerbated by the difficulties in obtaining building permits, in contrast to Israeli settlements or neighborhoods in Jerusalem. The report added that the lack of permits routinely forced Palestinians to build homes without permission as the population increases, despite the risk of demolition in the future. The Israeli government ruling on punitively demolishing homes of Palestinian suspects also emphasized that the homes would not be allowed to be rebuilt afterwards. According to the PLO, 30,000 Palestinian homes have been demolished by Israel since 1967, with 3,000 destroyed in East Jerusalem alone.

Meanwhile, the tensions in the West Banks remain high as daily attacks on each side continue. Israeli troops thwarted two attacks in the West Bank on Friday, killing a Palestinian who tried to ram his car into Israeli soldiers and wounding a second assailant who opened fire elsewhere in the territory, the military said. Also Friday, another Palestinian was killed in clashes with Israeli troops in the West Bank flashpoint city of Hebron. The bloodshed is the latest in almost three months of near-daily Palestinian attacks on Israelis and other Israeli-Palestinian violence. In one of Friday's attacks, the military said troops shot and killed a Palestinian man who attempted to ram his car into Israeli security forces near Hebron. The Palestinian Ministry of Health identified the assailant as Issa Hroub, 55, from the nearby village of Deir Samet. There were no Israeli injuries and the military did not specify how close the driver came to the troops. Earlier in the day, a Palestinian gunman opened fire at soldiers at a West Bank border crossing before he was wounded and fled the scene, according to the Israeli defense ministry. There were no Israelis injured in the attack at the Gilboa crossing near Jenin, according to ministry spokeswoman Arielle Heffez. She said Israeli forces were searching for the suspect who fled the scene in a van. Also in Hebron, 22-year-old Palestinian Oday Ersheid died in clashes between stone-hurling youths and Israeli soldiers, according to the Palestinian Ministry of Health. Ersheid is the brother of high school student Dania Ersheid, who was shot dead by Israeli border police in late October in Hebron.

A campaign of stabbings, shootings and car-rammings by Palestinians has killed 19 Israelis and a U.S. citizen since the start of October. Israeli forces have killed 111 Palestinians, around two-thirds of whom the army identified as assailants. The violence has been fueled by a number of factors, including frustration at the failure of long-running peace efforts, Israel's 48-year occupation, and tensions over a shrine in Jerusalem that is holy to both Muslims and Jews. The United States, the European Union and the United Nations have expressed concern about the rising death toll, urging both sides to apply restraint, while also recognizing Israel's right to self-defense in the face of the street attacks.
RELATED TOPICS