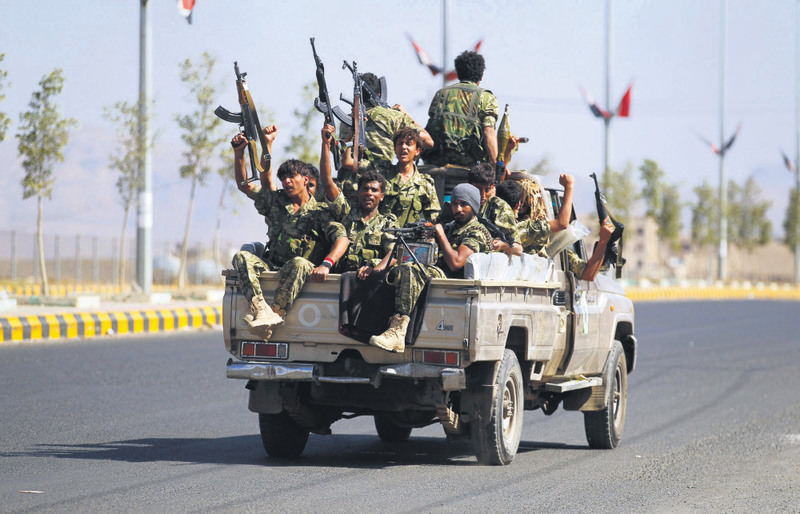 Armed Houthi rebels in a truck in Sana'a, Yemen after attending a parade on the eve of the planned cease-fire and Geneva peace talks.
by Daily Sabah with Wires Dec 15, 2015 12:00 am

Senior Saudi and Emirati officers have been killed in war-torn Yemen ahead of a cease-fire agreement and with peace talks one day away. Two previous truce attempts were breached as both parties accused the other of violating it

Two senior commanders from Saudi Arabia and the United Arab Emirates were among dozens of Gulf, Yemeni and Sudanese soldiers killed in a rocket strike in Yemen on Monday as fighting flared before Tuesday's peace talks, local media and Yemeni sources said.

The Tochka rocket strike on a Red Sea army camp south-west of the besieged city of Taiz early appears to be one of the bloodiest setbacks for Gulf forces in months of fighting against Iran-allied Houthi forces and Yemeni army units loyal to former President Ali Abdullah Saleh.

The Houthis said via their own media outlets that the two commanders were among scores killed in a rocket attack near Bab al-Mandab on the Red Sea coast. A source in Hadi's forces confirmed that a rocket had been fired at coalition forces in the Dhubab area, north of Bab al-Mandab and south-west of the city of Taiz, adding that "tens were killed" in a camp that houses Yemenis, Sudanese, Emiratis and Saudis. Saudi Arabia has led an Arab coalition in a military campaign since late March to stop the Houthis, allies of Riyadh's main regional foe Iran, from taking complete control of Yemen after they seized the capital Sanaa last year and advanced south towards the port city of Aden.

The Saudi-led campaign has retaken Aden and the city of Marib, east of Sanaa, but has failed to oust the Houthis from Taiz or end attacks on the Saudi border that have killed scores of the kingdom's soldiers. Yesterday's strike was the worst reported since more than 60 Saudi and Emirati troops were killed in September when another Tochka rocket hit the al-Safer air base near Marib in northeastern Yemen. So far at least 80 people, mostly soldiers and border guards, have been killed in Saudi Arabia because of the Yemen conflict. The UAE says it has lost almost 70 soldiers so far. Several Bahraini troops and one Qatari soldier have been killed as part of the coalition operations.

The Houthis and Saleh's former political party, the General People's Congress, are sending representatives to Switzerland on Tuesday for talks with Yemen's internationally recognized government under President Hadi. A seven-day renewable cease-fire was scheduled to come into effect yesterday to coincide with the talks. Two previous cease-fire attempts, in May and July, were followed by accusations of breaches by both sides.

On March 25, Saudi Arabia and its Arab allies began an extensive military campaign targeting Houthi positions across Yemen. The coalition includes Bahrain, Egypt, Jordan, Kuwait, Morocco, Qatar, Sudan, and the United Arab Emirates, who have conducted numerous airstrikes throughout Yemen against Houthi forces. Riyadh says its air campaign comes in response to appeals by Yemeni President Abd Rabbuh Mansour Hadi for military intervention against the Houthis. The Houthis, meanwhile, denounce the offensive as an unwarranted "Saudi-American aggression" on Yemen.

Nearly 6,000 people have been killed in the conflict, almost half of them civilians. It has also pushed Yemen to the brink of famine. According to the U.N. World Food Programme (WFP), the number of food insecure people in Yemen is now close to 13 million. A shortage of drinking water is a critical issue. Also, UNICEF said in a report that nearly 10 million children, or 80 percent of the country's under-18 population, are in need of immediate humanitarian aid.

Meanwhile, the Iranian Foreign Ministry said yesterday that the strained relationship between Saudi Arabia and Iran can be eased if the government in Riyadh is ready. The rivals have long vied for power and influence in the region and are supporting opposite sides in the conflicts in Syria and Yemen.

"If there is a definitive will on the part of Saudi government ... ground will be prepared in order to change the current atmosphere," ministry spokesman Hossein Jaber-Ansari said, according to Iranian broadcaster Press TV. Representatives from Iran and Saudi Arabia were among top diplomats attending two conferences on Syria conducted in Vienna in October and November. Riyadh has repeatedly called for Syria's Bashar al-Assad to step down to end the country's conflict, a stance opposed by Tehran.
Last Update: Dec 15, 2015 2:25 am
RELATED TOPICS