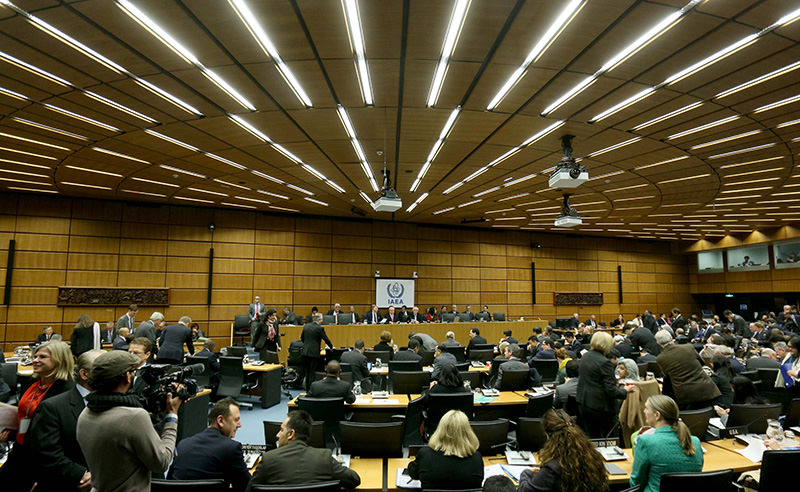 Delegates wait for the start of the board of governors meeting of the International Atomic Energy Agency, IAEA, at the International Centre in Vienna (AP Photo)
by Associated Press Dec 15, 2015 12:00 am
The U.N. nuclear agency closed the books Tuesday on its decade-long probe of allegations that Iran worked on atomic arms, and Tehran proclaimed that it would implement commitments within weeks to cut back on present nuclear programs that could be used to make such weapons.

The probe had to be formally ended as part of a July 14 deal between Iran and six nations that involves the removal of economic sanctions on Tehran. A resolution was approved by consensus of the 35-nation board of the U.N.'s International Atomic Energy Agency.

The move means that some questions about the alleged weapons work may never be resolved. Before the resolution's adoption, agency head Yukiya Amano told the board that his investigation couldn't "reconstruct all the details of activities conducted by Iran in the past."

At the same time, he repeated an assessment he made last month that Iran worked on "a range of activities relevant" to making nuclear weapons, with coordinated efforts up to 2003 tapering off into scattered activities up to 2009.

Chief Iranian delegate Reza Najafi denied such work, in keeping with his country's constant line during the protracted probe. In his statement to the board, and then to reporters outside the meeting, he said Tehran's nuclear activities "have always been for peaceful civilian or conventional military uses."

Noting that formal closure of the issue negates a series of critical IAEA resolutions against his country, he proclaimed Tuesday a "historic day" that opens the path to closer cooperation both with the agency and its member nations.

Amano hailed the "very important milestone." At the same time, he noted that with his agency charged with monitoring Iran's commitments under a deal that extends for more than a decade "much work needs to be done in the future.

"We cannot relax," he said. "We cannot be complacent."

Despite Iranian denials, the U.S. and its allies continue to believe that Tehran did work on components of a nuclear weapon. But their overriding interest is moving ahead to implement the July 14 deal.

Najafi, the Iranian delegate, said that with the probe put to rest Iran could meet its obligations under that agreement within "two or three weeks." But it was unclear whether that time frame would include not only Iran's declaration that it has met its commitment, but also IAEA verification that it has cut back or re-engineered equipment that could be used to make nuclear weapons Amano said his agency would need "some weeks" to sign off on its certification.

The deal also calls on Iran to ship to Russia most of its store of enriched uranium that is now at the level used to fuel reactors but could be further processed into the fissile core of nuclear warheads. Najafi said that process would be completed "within two or three days."

Once the agency confirms that Iran has met its part of the deal, most individual and international sanctions imposed on Iran over its nuclear program will be lifted.

A European Union statement reflected the will to move on. Unlike in previous statements, it avoided condemning Iran over its alleged weapons research and development program, saying only "we note" the agency conclusion.

Ensher also suggested the agency could again be called upon to investigate Iran, noting that the closure of the probe doesn't prevent the agency from following up on "any new concerns regarding weaponization."

Still, most of his comments were low-key and forward-looking the U.S. participated in drawing up the resolution ending the investigation along with the other nations that negotiated the deal with Iran Russia, China, Britain, France and Germany.

Strong criticism came from Israel, which tried and failed to prevent the July 14 deal from materializing. Israel's IAEA delegate, Merav Zafary-Odiz, characterized the document ending the probe and leading to a deal that her country says keeps Iran's weapons-making potential intact as an "erroneous resolution."

"Nothing has changed," she declared. "All the indicators for the existence of a clandestine nuclear weapons development program in Iran ... are still valid."