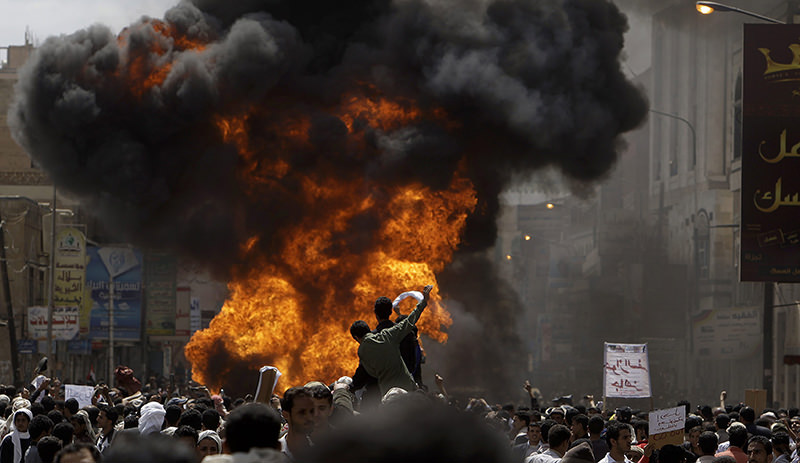 Yemeni anti-government demonstrators react after setting on fire a vehicle belonging to supporters of President Ali Abdullah Saleh during clashes in Sanaa. (AP Photo)
by Daily Sabah with AFP Dec 19, 2015 12:00 am
At least 68 people were killed Saturday in fighting between troops and Shiite rebels in northern Yemen, military and tribal sources said, as the UN voiced alarm at ceasefire violations.

The casualties included 28 troops, according to military sources.

Tribal sources said the Houthi rebels lost 40 men in heavy clashes near the northwestern town of Haradh, which was overrun Thursday by government forces.

Some 50 Huthis and 40 loyalists were wounded in the fighting, the sources said.

Clashes intensified early Saturday as government forces attempted to advance towards the Red Sea port of Midi and as the rebels brought in reinforcements, tribal sources said.

Government forces trained in nearby Saudi Arabia crossed the border from the kingdom Thursday and seized Haradh.

A cease-fire took effect on Tuesday in conflict-ravaged Yemen as warring sides began U.N.-brokered peace talks in Switzerland, according to the United Nations and the Saudi-led coalition battling Iran-backed rebels.

The U.N. envoy to Yemen, Ismail Ould Cheikh Ahmed, hailed the halt in fighting as "a critical first step towards building a lasting peace in the country." He said that the talks in Switzerland "seek to establish a permanent cease-fire and pave the way for a return to a peaceful and orderly political transition."

A lull in fighting is sorely needed in the Arabian Peninsula's poorest nation, where nearly 6,000 people have been killed in the conflict, almost half of them civilians and more than 27,000 wounded since March, according to the U.N. The fighting has also pushed Yemen to the brink of famine. According to the U.N. World Food Programme (WFP), the number of food insecure people in Yemen is now close to 13 million. A shortage of drinking water is a critical issue. Also, UNICEF said in a report that nearly 10 million children, or 80 percent of the country's under-18 population, are in need of immediate humanitarian aid.